Most people tend to know about USB, or at least heard about it. But USB comes in a wide variety of incarnations. There are USB-A plugs, and USB-B plugs. And micro-USB, and even still some mini-USB hanging around, though they're largely faded out. And a lot more.

But there are also different standards. USB 2.0 is pretty much what people are aware off. But a few years ago, a new standard was introduced - USB 3.0, which allows for much faster transfers of data.

Using USB 3.0 devices isn't as easy as just plugging them in - you have to upgrade your computer to be USB 3.0 compatible, or buy a system that has USB 3.0 ports. (I wrote about upgrading here for those who are techno-interested.)

I've reviewed USB 3.0 Flash drives in the past, during their days of infancy, and I thought it would be time to take a look at a few USB 3.0 external drives, now that the standard is more mature. Sometimes, after all, when you go on the road, you want to take as much as your backed-up material with you - photos, music, videos and more - rather just what can fit on a Flash drive.

(Not to confuse the issue more, there is a new type of USB plug that is slowly being introduced, known as USB Type-C, or just USB-C. This is a much smaller plug, sort of a cross between a micro-USB and Apple's Lightning. It runs on the USB 3.1 protocol, which is even faster than USB 3.0. And though you haven't seen a lot of USB-C devices yet...they're coming. This is the standard plug of the future - in fact, Apple is already using it in their new Macbooks.)

But - there is still a world where USB 3.0 devices live. And I decided to take a look at three external drives that offer a few unique features to them that are work checking out, especially if you've already upgraded your desktop computer to USB 3.0.

The Verbatim Store-'N'-Go USB 3.0 is conveniently small and light for traveling - 3x5x1/2" and just 5 ounces, small enough to fit in your shirt pocket. It comes bundled with Nero BackItUp & Burn software, and also Verbatim's proprietary Green Button software for energy-saving, able to put the drive into Suspend mode if idle for long periods. And like all USB 3.0 devices, it's backwards compatible and will run on USB 2.0 systems. 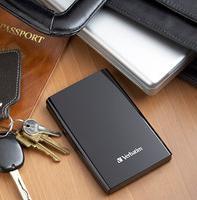 Rather than employ a basic lab Benchmark test, I generally use my own "Real World" test since, when one copies files, the user interface of an operating system will have a notable impact on speed. As a result, I do three tests: I copy an Outlook file (to see how the drive handles a huge, half-gigabyte file), and then copy the My Documents folder (to check a large number of small files), and finally I copy my Photographs folder (with mid-range sized files).

The Verbatim was respectability quick, with the following results:

For comparison purposes, I checked these numbers against a 2.0 portable hard drive, the Seagate Free Agent Go. Disappointingly, the Verbatim drive was actually slower (and notably so) than the older 2.0 drive, except for the large Outlook file.

Interestingly, or oddly (or both), when running a lab Benchmark test comparing the Verbatim USB 3.0 drive to the Seagate USB 2.0, the results are what you'd expect you should get - the Verbatim is significantly faster...in lab conditions. But there's something about when running through the Windows user interface that impacts speed and hits the Verbatim harder. In part, it could be related to how a hard disk fragments files, so the more fragmented, the more the hard drive has to work, making it difficult to get "pure" USB 3.0 speeds that exist in a lab.

Alas, for better or worse, we live in the real world - which is why I test external drives this way, with basic copy/paste - and with these results, it's hard to recommend the Verbatim for regular backup. There does, though, appear to be a specific, valuable usage for it - if you're someone who keeps backups of files that are especially high-capacity, like videos, the Verbatim drive would be a great value under those specific conditions, which (to be clear) is no small thing. It retails for $124 at the time of writing, but could be found online as low as $64. (The Store-"N" Go also comes in sizes up to 2 TB, which is particularly valuable if you do use it for large capacity videos.)

Seagate has taken the basic external USB 3.0 hard drive and done its best to ratchet things up a notch with some online and social media tweaks. To be clear, as a basic external drive, the Backup Plus has a lot to offer. Notably, it's very fast. 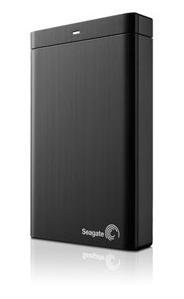 The model I tested was the 1 terrabyte version. And in my "Real World" test, the drive flew by with some seriously fast results.

Based on this alone, the drive deserves your attention.

Where Seagate moves into a different area is with the inclusion of its Seagate Dashboard software, which you install on your hard drive. Dashboard offers three services, what Seagate calls "Protect, Save and Share." 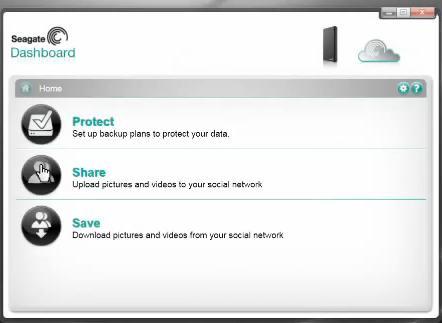 The Protect part is basic backup, though Dashboard has a respectable set of expanded features. There are two backup options: Automatic and Scheduled. "Automatic" will backup files from your hard drive whenever they are changed. Without any intervention by you, it searches for documents, photos, videos and any non-system data. This requires having the external drive plugged in all the time, which might not be your choice, but it's there should this be how you'd like to backup. (Note: it's a good idea to do external backups - and I do have an external drive plugged in all the time...) "Scheduled" gives you more control. It allows for daily, weekly, monthly and such (which again is best suited for being regularly plugged in), though it also has an on-demand feature. Overall, the Dashboard software is well-designed, reasonably easy and has solid improvements over early incarnations of the software.

Using "Protect" is pretty normal and basic. It's with the "Save" and "Share" features, however, that Dashboard moves into a new area. Neither are inherently related to the backup drive, but being part of the Dashboard software that comes with the Backup Plus, you can use it that way.

What "Save" does is download files from several social media services (like Facebook, Flickr and YouTube) and saves them to a default folder on your hard drive. (You can change this folder to be anywhere on your hard drive, or even put it on the Backup Plus external drive.) It does this manually - Dashboard includes icons for these three social media services, and you simply use your normal log-in - or will download the files automatically, whenever you've made a change to your personal social media webpage. (Many people, for instance, will take photos or videos on their Smartphones and upload them to their social media site, and use this as a sort of backup. The problem is that material isn't backed up especially well on social media sites. And keeping the original files stored on your phone, which is unfortunately common, is not an ideal backup solution. This resolves that issue.)

"Share" does the opposite. It lets you upload multiple photos and videos from your hard drive to these social networks with a single click. When logging into them on Dashboard, it knows your existing albums, so you can choose where to share, or lets you create new albums. The ability to do this with multiple files, rather than upload one at a time is a strong point, and it's very well-designed and fairly easy.

Neither of these features are for everyone, and some people may find them pointless. But it's certainly a significant field and adds value to a growing audience. And Seagate even offers yet another backup feature with Dashboard - a two-year, free subscription for 200 GB of storage to Microsoft's OneDrive comes with the drive. A link to the cloud is part of Dashboard. But with OneDrive offering 1 TB free to users of Office, the value of Seagate Cloud may not be high.

The Seagate Plus comes pre-loaded with an NTFS driver for Mac, so you can use the drive interchangeably between PC and Mac computers without reformatting the drive. Very nice. The design is simple with clean lines. It's fairly small - about 5 x 3 x 0.6 inches, and weighs, 7 ounces. Not something you'd likely carry in your shirt pocket, but you could. 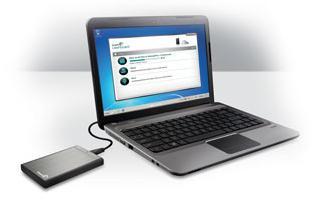 In the end, you may not need any of the Dashboard features, useful though they may be to some people. But even without them, the USB 3.0 Seagate Backup Plus is wildly fast. The 1 TB model tested retails at the time of writing $59. (For comparison purposes, the 500 GB Backup Plus retails for $40. You may not have need for the 1 TB version, but given how commonplace saving photos, videos and music files are, the $10 price difference for an extra 500 GB is almost insignificant.)

When I came across an advance model of the Seagate Seven mm Portable Drive at CES a year ago, it had a lot that impressed me, and I looked forward to testing it.

The drive is named for its stunningly thin size, great for traveling and taking with you as a backup. It slides incredibly easily in your shirt pocket. The drive has a sleek, elegant metal design, and holds 500 GB of storage. And as a USB 3 device, it figured to be blazing fast. (Again, as noted, USB 3 devices are backwards compatible, so it will work on standard USB 2 slots.) 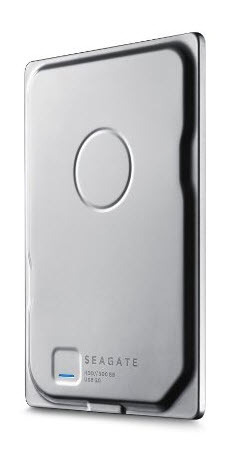 Alas, I was disappointed when I put it through its paces. Though there still are reasons to consider it under certain circumstances.

The Seven mm comes with a USB 3 micro-B plug - don't worry about names, just know that it's different from the standard micro-USB 2 plugs you likely have a drawerful hanging around your home. That's to be expected, this is a USB 3 device, after allow, and not a problem, though it means if you have to be sure to carry this extra cord with you (assuming you also carry a standard micro-USB cord for other portable devices) and most-especially hope you don't lose it, since you won't have a drawerful of spare ones.

More to the point, though, is I was shocked how slow it ran. To be clear, some drives are configured for large files, rather than small files, and the Seagate did copy very large files fast, as you'd expect with USB 3. But when I did a test of a Document folder filled with 1,000 small files, the Seagate took 3 minutes and 6 seconds to copy it. However, I copied the same folder to two different standard, supposedly-slower USB 2 portable drives: with the first, it only took 55 seconds. The second copied the folder in a mere 15 seconds. I tried the test three times with similar results on all three drives.

If you want an exceedingly thin, portable drive and intend to just copy huge files, like videos, it's worth considering the Seagate Seven mm, for which a 500 GB model retails for $100 - if you have a system that can take advantage of USB 3. Beyond being so thin, it's also very sturdy, so you should feel safe traveling with it. But I think for most people, the slowness with document files and small files suggests there are likely better options, including Seagate's own Backup Plus Slim.

To read more from Robert J. Elisberg about this or many other matters both large and tidbit small, see Elisberg Industries. He can also be followed at a distance on Twitter or Facebook