I hadn't really expected to devote much attention to what are basically flashlights. In fact, when I came across the new series of Energizer products, I only contacted the company about reviewing one of them, an item which I thought would be appropriate for using when on the road. But the representative really wanted to send as much of this new line as I'd we willing to look at, so I figured, what the heck, okay, send me the whole thing. (Well, almost the whole thing. One light overlapped another a bit, so I passed on that.) As it turned out, I ended up quite glad I got them all. Though similar, they each serve a unique function, and best of all, I never expected to be so impressed with... flashlights?! But these are really good, each of them. So, I figured I'd devote the whole column to them -- yes, flashlights. Go figure.

These aren't your standard, traditional flashlights. They use LED. My experience in the past has been that LED lights suffice but never much more than that. These are bright and powerful. And they offer additional capabilities that you don't get with a traditional bulb light. In fact, I have a couple of flashlights laying out for easy grabbing when I plan to wander somewhere at home in the dark, and more often than not, I find myself grabbing for the "2 in 1 Light" than my old fave flashlight. More on the "2 in 1" below.

I had one quibble with all the Energizer lights at first. They all have a TryMe test feature, which is certainly nice when sitting on a shelf in a store. But there was no information on how to turn the feature off until you read through the manual and found the explanation in in small print. And honestly when was the last time you thought of reading an instruction manual of a flashlight? The good news is that I've been told that info on turning off the TryMe feature has now been added to the product (or box) with a sticker. So, you should be fine now.

At its heart, this appears at first glance as a standard flashlight. It has a directional light that delivers a bright 75 lumens and should run for about 10 hours.

Where the "2" part comes in is that it also can serve as an area light. If you hold down the on-off switch, the front light stays off, but the handle brightens up and becomes like a flood light. (It's all in one direction -- only one side of the handle lightens, so it shines in just one direction, not 360 degrees.) The area light provides 100 lumens. 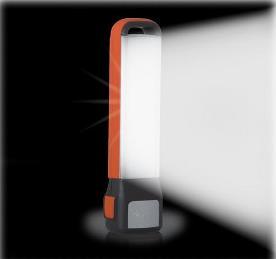 Then another nice feature kicks in. The light is dimmable. By clicking the on-off switch, you can toggle through the settings. And at its lowest output, you can get up to 100 hours.

(Side Note: For all the lights, I had difficulty getting exact information on runtimes. What the box says would sometimes differ with what was on the website, which was different from the information in the manual. And that was occasionally a little different from what the company rep would tell me. I've tried my best to give as accurate details as I can, balancing what I was told with what makes the most sense.)

There is a convenient hanging hook, which particularly comes in handy when using the area light. And the device is water resistant. It comes with four AA batteries included.

At the time of writing, the "2 in 1 Light" retails for $25, but it could be found online for $17.50. Certainly you could fine a cheap, basic flashlight for less (and some for more), but it offers several convenient features that you wouldn't get with a standard flashlights, if such things are valuable to you, notably the area light, and dimming.

My initial reaction when receiving the Pop Up Lantern was that it wasn't something I'd be interested in writing about, but after using it for a while, I came to appreciate it a great deal. Particularly nice is that it's collapsible and can function in either mode, while being very portable. At full use it's seven inches tall, and has a long neck which is illuminated on both sides -- like a lantern -- so you get full, 360-degrees of light. It delivers a powerful 150 lumens and has a 100 hours runtime. (I believe this is likely at the dimmest setting. Again, by clicking the on-off switch, the lantern is dimmable.) 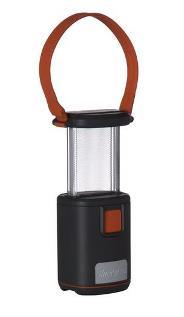 You can lower the neck though and turn the thing into a compact package only four inches high. It still will deliver a bright-enough light to illuminate a room somewhat.

There is a big looping handle that makes this very convenient for hanging almost anywhere, and it's therefore particularly ideal for camping -- like any lantern -- or perhaps outdoor patio use. But what I also found and appreciated is that when collapsed to the compact mode, it made a terrific night light for a bed table. If you have to wander through a dark room at night, the compact light is plenty enough to help, but not overpowering like it might otherwise be at full floodlight height.

It too is water resistant, comes with four AA batteries, and retails for $25, though I found it for $18 online.

I wasn't quite sure what to make of the Folding Lantern when I first got it. It's oddly shaped and seemed to be much more a lantern than flashlight. But then, that's what it says it is. And by the time I got finishing testing it -- especially since I had reason to actually put it to full use (more on that later) -- I came away blown away by how good it was.

The Lantern pivots open and can go from illuminating a 180-degree area when closed and compact, to providing 360-degrees of full floodlight when open. It can deliver a glowing 300 lumens -- or less when dimmed. (So, again, yes, it's dimmable.) 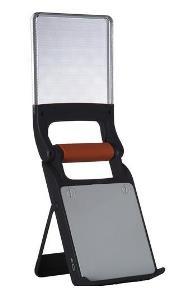 It can run from 40 hours at full power up to 100 hours when using eight AA batteries. However, in an interesting touch, the lantern can also run on just batteries. It will be just as bright, but the runtime is cut by a little more than half, running from 15-40 hours. Using four batteries saves money, but as you see you get more than twice the runtime when it's operating with eight batteries.

When folded closed, it becomes quite compact. There is a big handle, so that when open the lantern can be hung to illuminate a wide area like a floodlight. But you can also pivot the frame and use the base as a stand. It too is water resistant.

The Folding Lantern is intended for camping and outdoor backyard activity, and is wonderfully suited for such activities. But as mentioned above, I came across a firsthand use when testing it, and found another impressive use for the device.

As luck or fate would have it, the night I opened the package to test it -- my neighborhood had a blackout. (I suspect that Energizer arranged this...) Using other lights at hand, I decided to test the Folding Lantern under those conditions, rather than wait until later -- and it was absolutely terrific. The amount of 360-degree light it provided around the room was seriously impressive, and using its stand was very convenient. It really brightened the room significantly -- not like having my lamps on, of course, but it was reasonable comfortable.

(For that matter, I decided to add more light by extending the Pop Up Lantern, and even used the 180-degree area light of the "2 in 1" light. I hardly expect most people to have all three Energizer lights at hand, but I was very glad to have them at that time myself.)

I have one quibble with the Folder Lantern. It appears to have screws on the back for the battery compartment -- but it turns out these are just plastic latches holders. The manual says nothing about this, so for the longest time I was trying to unscrew all four of them to remove the back, and they kept spinning. (I thought I had broken something.) A mere quarter turn was need to remove the pins. They feel a bit fragile compared to the rest of the unit. Also, you have to wedge out the back panel to get to the batteries, it doesn't remove easiest, and I was concerned about breaking it. Though that fear appears unnecessary, since things removed fine.

The Folding Lantern isn't something for everyone -- but if you have need for such a thing, or if you want a back-up light in case of black outs, it was absolutely wonderful, and one of the most unique battery lights I've come across. It retails for $35 and at the time of can be found online for $25.50.

"The Writers Workbench" appears monthly on the website for the Writers Guild of America. To see this entire column, with additional "TWW Notes," please click here.