The popularity of handheld devices has grown over the years like proverbial weeds. In large part, it's their simplicity. Hook your device to a synchronizing cord, press a button, and that's it, as all your information is transferred from your Personal Information Manger into the handheld you use.

This is particularly easy if you use Outlook, since most handheld device has translators developed for this most popular of PIMs. But not everyone used Outlook, of course. And further, as people grow to have more than one handheld device, the need to communicate between them all has grown.

If you use one of the many other PIMs or have more handhelds than hand, you may find you're in serious trouble - often having to copy for one device to another, so that you can copy this to another, so you can finally synchronize that data to the device you want.

You thank heaven for conduits. These are programs that sand between your handheld and PIM. The short, English version of what they do is translate the information so that each can read the other. And then, life as you know can finally go on.


"The Writers Workbench" appears monthly on the website for the Writers Guild of America. To see this entire column, complete with product graphics and additional "TWW Notes," please click here

XTNDConnect PC has long been one of the leaders in the conduit field, offering a wide range of compatibility for PIMs and handheld devices, as well as reasonable ease of use.

Ease is a relative term, since all of these translators require a bit of configuration, and we live in a Plug-and-Play world. Once set up, of course, they all are as easy as pressing a button. Getting to that point, however, is the hurdle. XTNDPC makes the hurdle as palatable as possible.

It's also added certain features that make a huge leap in compatibility. Previously, you could only set up one connection profile at a time. (For example, to synchronize between Lotus Organizer and a Palm Tungsten E2, in my case.) If you wanted a second "profile," you basically had to reinstall the program and...well, it was a mess. 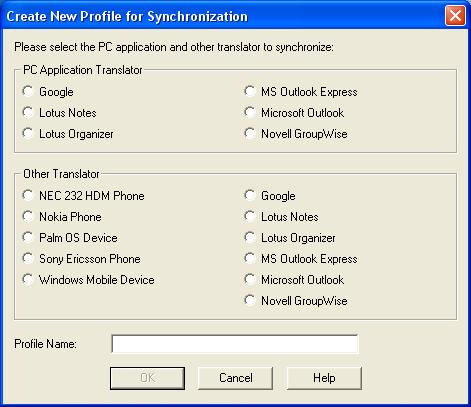 No more. Now, you can set up as many profiles as you like, with the simple click of a few clear buttons. With complete ease, I added a profile for Lotus Organizer-to-Microsoft Outlook (so that I could keep the latter synchronized with Organizer without having to manually add every change - a requirement made necessary by my iPod touch synching only with Outlook.)
.
The new version of XTNDConnect PC has a few other features, mostly under-the-hood variety. It synchs much faster, for instance, and has added device compatibility and up to 17 languages. Also, it now (finally) also will sync certain data sources that weren't previously supported - for example, Lotus Organizer's Planner (which schedules blocks of times) and Anniversary sections. However, it's the ability to created multi-profiles that is the biggie.

Installation is fast, and lets you set various preferences at the start, but all of these are configurable later. And you'll want to check things out because there will be settings important to how your synch is accomplished. Most of the defaults will work fine for you, but several are critical.

Although in its previous version XTNDConnect PC made huge leaps to be more user friendly, some choices will still be confusing. Just know that - for the most part - the most numbing of the options are only those which power users will want to get into, and you'll ever have to access - or understand.

You begin by checking off which items you want to synch - for example, Contacts, Calendar, Tasks and Notes...and not, in my case, Email.

The Options tab includes perhaps the most important setting to check: whether you want a one-way synch (which overwrites only the handheld) or two-way (which transfers material back-and-forth, overwriting your original source) - and also whether you want data to be overwritten or ignored. This is handled very simply and clearly. Choices are laid out easily, telling you precisely what actions will be taken.

Important Note: you need to individually select your choice for each item (ie, Contacts and Calendar and Tasks, and so on), rather than just one single click that covers the full synchronization. The downside of this is that, although it's very easy, it requires several extra steps that can get overlooked. The upside is that it gives you full control over each item, in case you might want a less-uniform synchronization. Though my choice would have been to have a single-click option.

With the Filters option, you set how you'd like your data to be handled - for example, you can synch your entire Calendar for just the current day, or you can set a date range and synchronize material that starts two weeks before the current date through the following six months. And it's all described in clear English, not computerspeak.

One of the more potentially confusing areas of any translator conduit is "mapping" or linking up the fields on the handheld device with those of the PIM software you're syncing from. The challenge here is that what the conduit calls a field (ie, Business Address) can be named differently from how the PIM handles the same thing (for example, just Address). XTNDConnect does an excellent job of this, however, making the process almost hands-off. In fact, when setting up the links with Lotus Organizer, I didn't make any changes, which is very impressive. Further, a personal category that I'd needed to set up with a previous version of the program had the link included in 7.0.

Editing and creating new linked fields is fairly easy. You edit by drag-and-dropping, which worked like a charm. Edit was more of a challenge, but that's because the Edit button does a different kind of field editing than drag-and-dropping. Also, Creating a mapped link between two items was simple - just highlight fields in each window, and clicking "Create." 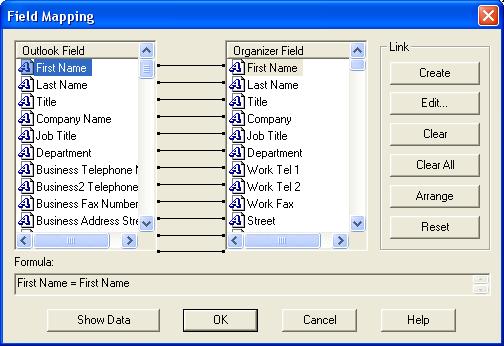 Launching XTNDConnect PC for the first time, it does a Full Synchronization, though after that it only synchs material that's been changed, making the process extremely fast. And as noted, version 7.0 appears much faster than earlier version. (In fact, it zipped by so quickly that I couldn't read a few pop-up message windows.) You can always force a Full Synchronization at any time.

XTNDConnect PC has a very good Help module. Explanations are extremely clear; the only downside is that they aren't always as detailed as one might like. Version 7.0 also eliminated a very user-friendly "chart" that the program had (a separate menu bar that walked you through using the software, step-by-step, almost as a tutorial). This wasn't ever necessary, but had been a nice feature.

In the end, XTNDConnect is very easy to set-up and use. And as mentioned, once it's configured, you can simply forget about it, since synching is automatic. It's extremely fast, handles complicated field mapping easily, and most importantly now lets you add profiles from within the software.

There remain are a few downsides to EXTNDConnect PC. The most notable is that a few items are still unsupported from Lotus Organizer. Most are minor, though of interest - for example, the Address Book doesn't support middle names or initials. Nothing is hugely significant, but it's worth noting,

Also, it was a bit difficult to find settings for Lotus Organizer's Planner and Anniversary sections, new to this version. It turns out that they're buried under a setting called "Appointments." That's not a problem - however, there is a known issue with the feature. The company says that only 13 "anniversaries" will synch - though I also found that recurring appointments which had been created during a particular year wouldn't synch either. Manually changing them to a recent year, however, seems to have resolved the issue, and the company says they're working on getting out an easy fix.

I did have one notable problem. Although the XTNDConnect synched Lotus Organizer and Microsoft Outlook just fine - I began getting an error message when trying to synch Lotus Organizer and my Palm Tungsten E2. Oddly, it worked fine the first few times, before the error message began. However, an email to the company got this resolved with a very easy fix, basically overwriting the bad data by doing a "Full Synchronization" for the module that wasn't working. This shouldn't be a common issue..

XTNDConnect PC 7.0 is a very good program, not significantly improved from before, but with many excellent additions. Ease and simplicity high among them. And if you use PIMs other than Microsoft Outlook and also have multiple handheld devices to synch, it borders on being a necessity.

At the time of writing, the program retails for $60, while an upgrade to current users is $40.


To see this column with complete product graphics and additional "TWW Notes," visit the WGA website.