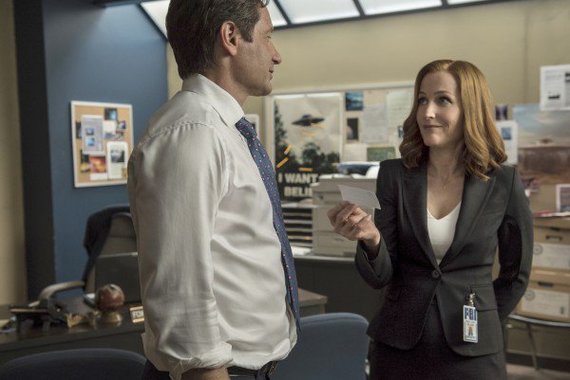 Stop me if you've heard this one before. An episode of prime time television that opens up with a Muslim man praying.

It's not an uncommon cold opening in a post 9/11 entertainment world. Series like Homeland and 24 show these images on a regular basis, and there's nothing wrong with that. Muslims pray. What is wrong is that most of the time, this scene is followed up with that same Muslim folding up his prayer mat, getting into a car, and blowing up a big building filled with innocent people.

I just described the opening to the most recent episode of The X-Files, Babylon.

Before I begin, I'd like to say that less than a month ago I wrote about my experiences as a Muslim, hijabi fangirl who was starting to find her place in the world of entertainment. I also mentioned that my favorite TV show was The X-Files, a show about aliens and government conspiracies. So, it came as a pretty big surprise to me that a show who not once, but twice, depicted its title characters Mulder and Scully (played by David Duchovny and Gillian Anderson, respectively) chasing after a monster made of garbage, was now demonizing the world's second largest religion.

They blew something up.

The rest of the episode didn't get any better. It attempted to combine philosophy, theology, human emotion, and comedy into one episode. In 5 minutes, we witnessed Mulder go on a mushroom trip where he line-danced to the tune of Trace Adkin's Honky Tonk Badonkadonk, and then ended up on a boat where the mother of Shiraz (the first Muslim man we met) carried her son's body towards him. The latter scene was an attempt by Chris Carter, the show's creator, to show that "Mother love is a common and even universal language that transcends race, culture, and borders. It is the language even God couldn't destroy." The idea was great, it was just executed terribly. By propagating the stereotypes of Muslims, Carter fueled the Islamophobia present in society today.

So what do I, an American Muslim, think about Babylon?

At the end of the day, I can't complain any more than I have about The X-Files. Will I ever watch this episode again? Probably not. I'm just happy Mulder and Scully are back on TV, and they're still searching for the truth. My only hope is that in the future, pop culture phenomena with such grand influences on society depict Muslims for who they are; people who as Ben Affleck eloquently put it "just want to go to school, have some sandwiches, and pray fives times a day."

I won't let one episode ruin my experience of The X-Files revival. I mean, who judges an entire television series based on one episode?