I don't necessarily recommend giving up on your marriage and your religion in the same year, but I recommend that you learn to make spaghetti carbonara if you do. 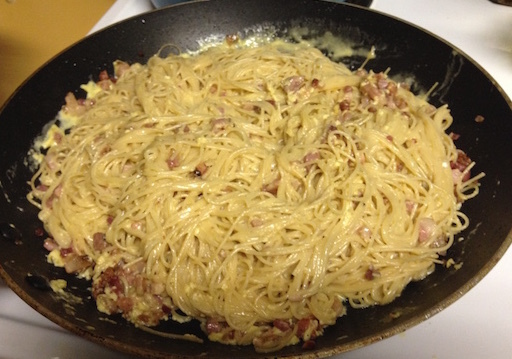 Shortly after moving to Los Angeles in my early 30s, I left the church and my marriage. I'd been devoted to a man for a decade and to God for as long as I could remember. I'd built my world around both. So between tearing my life apart and navigating the freeways, you could say I was a bit disoriented. I didn't know what I would do next with my big blank slate of a life, but I caught a glimpse of how I wanted to feel, watching Nigella Lawson.

Americans could see Nigella only on the Style Network back then, and I anticipated her show each week. She strolled through London markets, tossed herbs into shapely pots without measuring and wandered into her kitchen for midnight snacks. She was joyful and effortless and knowing and delightful.

Where I came from, pleasure was for those who didn't take the world's problems seriously enough. I grew up in the Midwest, sheltered by well-meaning, evangelical, right-wing Christian parents. We held hands and prayed aloud before every meal, even in restaurants, and attended church several times each week. I thought drinking wine was sinful and listening to rock 'n' roll put you on the fast track to hell, which was a literal, fiery pit. I carried that understanding with me into my 20s, and into my marriage.

Pasta and the problem of evil

My understanding of food was as limited as my understanding of the world. Iceberg lettuce was the only kind, as far as I knew. When my family ate Chinese food, it was canned La Choy. We knew how to cook potatoes but were perpetually baffled by pasta. How to know when pasta is done was one of the great mysteries of my childhood, far more difficult to understand than why God allows evil things to happen.

Watching Nigella all those years later, I learned about risotto and halloumi and pumpkin curry. Making her recipe for lemon linguini, I held those egg yolks in my hands and admired them just like she did. Making her recipe for spaghetti carbonara, I began to experience food as sensual: whisking Parmesan into a bowl of cream and eggs, grating fresh nutmeg, watching pancetta sizzle in vermouth.

I didn't just learn to make food. I learned to make my way. The world started looking different. It wasn't an ordeal -- it was full of spices and cheeses I'd never heard of, and I knew what to do with them. I'd been feeling anxious and condemned and hungry, and I hadn't even known it. I didn't have enough distance yet to see how deeply rooted in fear and judgment my life had been, but I knew enough to start reaching for something better. You can always reach for something better, I would find out, which is its own kind of secular redemption. I wanted to trade in my ignorance for some generosity and curiosity.

A hymn to the candy aisle

I began building my life around small moments of liberation. Trite as it may seem, chocolate helped me through my first divorced Easter. In my defense, my indulgence was inspired by Juliette Binoche's performance in the movie Chocolat, not the Cathy comic strip. I found my way to the Food Network too. They didn't have a British goddess, but they had smart holiday programming, and their nonstop Americana got me through my first divorced Fourth of July. At Thanksgiving, a colleague asked if I would be OK, what with my being newly divorced and pitiful and all. I didn't feel OK cornered in tears at the office, but I realized I would be perfectly happy alone in my kitchen during the holidays, trying something new.

I started enjoying my way into other things too. I fell in love with historic house museums of nearly every era. I discovered an inordinate fondness for the candy aisle at Chinese supermarkets. I became obsessed with bizarrely cute Japanese notebooks. I got into Mexican folk art. I became an embodiment of that line from Percy Shelley's Hymn to Intellectual Beauty: "I shrieked, and clasped my hands in ecstasy!" Except that I found some bliss in dry goods.

Then I remembered that I liked nature, so I created a new ritual for myself with coffee, the Sunday newspaper and the Pacific Ocean. I expanded my reading program, too. First, a book called Spiritual Divorce. Next, the feminist theologians. Then some Jungian analysts. And if you've ever wondered what kind of person might check out Sex for Dummies and The Complete Idiot's Guide to Wine from the library on the same day, it's nice to meet you.

My body went from being my defense against the world to my way of being a part of it. I started reconnecting with myself and appreciating life, in my kitchen and out in the world. This was about letting go of judgment as my modus operandi. This was about trusting myself after decades of running on willpower and rulebooks. This was about valuing purpose and pleasure in equal measure. I didn't know all that at the time. Cooking was just a thing I started doing, the way church-going and marriage-having were things I stopped doing. Some people start expressing themselves by dancing or painting. I just needed to eat. And if I sound like a fangirl, so be it: I'm still grateful to Nigella for showing me how.