I was 17 years old and spending my final Christmas at home with my folks before heading off to college. Like most families, we have our relied-upon Christmas morning traditions, and we happily engaged in them that day. First we opened the presents under the tree as soon as we woke up. My brother and I knew that my mom gave us the same gifts 75 percent of the time, because she didn't want to show favoritism -- the only thing that differed was the color or style. So if we saw two similarly sized packages, I'd open one and find a green sweater. That let Nate know his package was a blue sweater. Needless to say, we had the timing of our present-opening down pat.

Once we were done in the living room, we went through our stockings out in the family room. And this, my friends, is where things got interesting.

My mom is the designated stocking stuffer in our family, and certain things are expected every year. Socks, underwear, deodorant, toothpaste and candy are all staples. But after that, mom tends to get creative. She usually takes whatever we're into at that given time, and gives us gifts that reflect those interests. When I was little, it was baseball cards. As I became an awkward teenager entering puberty, shaving cream made an appearance. But now that I was 17 with a steady girlfriend and about to head off to college, I wondered what she had in store.

As I was digging through the usual suspects, I noticed something odd. It was a fairly big, 6″ x 6″ or so, square package. And it was wrapped. This was curious because nothing else in the stockings was ever wrapped.

I held it up to my brother, thinking he probably got something similar. But he met my gaze with a confused look. Even my dad looked perplexed.

"Only one way to find out," said my mom.

I was pretty excited. Maybe it was something for college. After all, I was practically a grown-up now. It must be something huge and important or else she wouldn't have saved it for last in my stocking. My fingers moved with anticipatory glee as they worked to undo the wrapping paper.

Finally I tore open the package. I was stunned. Shocked, actually. To the point I couldn't talk, move or even breathe. My mind raced furiously with possible explanations for the horror I was currently witnessing. Because there in my hand, staring me right in the face, was this: 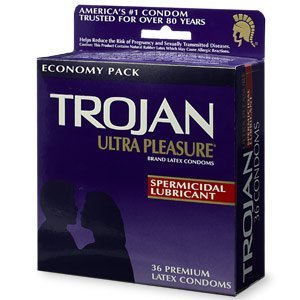 Yup. That's right. My own mother had wrapped a box of condoms and put it in my Christmas stocking. A 36-pack economy box of condoms, to be exact.

We had already had "the talk," and both of my parents were open and honest with me. They knew I had started having sex, and they covered all the points about safety and responsibility that parents should cover. But my mom has never done anything half-assed, and apparently she wanted to go the extra mile.

I was frozen in fear. I looked at my then-15-year-old brother, who had also grasped the horror of the situation and looked like he wanted to jump out the nearest window as much as I did. My only thought, and my last hope, was that this had been some crazy mix-up. My mom had obviously given me the wrong package. Either that or Santa has a really f*cked-up sense of humor.

"I... I think there's been a mistake," I managed to stammer.

"Merry Christmas, sweetie. Those should last you, what? A week?" my mom chirped cheerfully.

That was it. I had to leave the room. After all, I had just started having sex that summer and buying condoms was still a traumatic experience for me. But as humiliating and frightening as those clandestine trips into the local drugstore were, I would've gladly traded them in exchange for the hell that is receiving 36 rubbers from your own mom.

Now that I'm a parent myself, I recognize what a stroke of genius this was on her part. Because let me tell you, there's nothing worse than being a teenager and reaching for a condom, only to then associate it with your mother. I can't believe abstinence-only proponents haven't caught on to this yet.

To this day I eye my stocking suspiciously every Christmas morning and I trust no one!

I'm A Stay-At-Home Dad Who Felt Like An Outsider At Playgroup. That Has To Change.