On our second anniversary, we left the country.

But this, you should know, was nothing new.

In year two, of a marriage that was each of our second, we were all kinds of struggling. We had bickered and challenged our way in and out, through months of trouble -- children trouble, divorce trouble, work trouble, all kinds of troubling trouble. We had slammed doors and slept on the couch, drawn a cold shoulder and seethed in anger. There were times, as the months of that second year sprawled out, I wondered if we would ever be all right.

But because married couples of a certain age and station travel to celebrate their wedded bliss -- their joy -- we ignored our lack of it and headed north-west, into Canada.

Except that even in Canada, we were still up in arms.

Our cellphones did not work over the border and we had to use a map to find our way to our destination. And this is when we discovered, quite coincidentally, that we both sucked at maps. We grabbed the paper out from each others grasp as we drove, creating alternate routes, out-routing each other, condemning the other's navigational skills with sighs and eye rolls. But still, we pressed on, with the tension between us, hot and full and thickening.

We drove in silence, against the sound track of high school make-out tunes on the radio, with only the occasional barb.

"Did you know that the second anniversary is china?" he asked me, looking straight ahead at the Canadian highway.

"As in for gifts? China. Like plates. Dishes?" I responded impatiently.

"Yes, like plates." He said with a patronizing smile.

"We don't have any china. I don't want any. I hope you didn't buy me china. " I angrily replied.

"I didn't buy you china." He grumbled.

After we arrived at our destination, as we toured the city and took in the sights, it continued much the same.

"You never let anything go," he said quietly into my ear, as we sat shoulder to shoulder bumping along in a streetcar.

"You're too sensitive." I accused him while we stood looking up at the Toronto sky tower.

"You ask too many questions." He seethed as he handed me my Starbucks.

He was getting annoying now. Plain old annoying.

We traveled the streets, stepping into bars when we were thirsty and sad.

We drank a lot.

We rode in taxi cabs when we were tired and didn't want to argue over who got to choose which way to get lost.

Mostly, we got lost.

In the Distillery District, on the Saturday of the weekend that was actually our wedding day two years before, I dragged him through a garden into an old church. I wanted to light a candle for my brother. I wanted to light a candle for us. But inside, even though it was the middle of a Saturday afternoon and the inside doors were flung open wide, there was a wedding. A woman and man, at least a decade younger than we were, were standing and promising forever. It was this minute, two years before, when we had made those same vows.

We peered quietly into the old church, gluttonous voyeurs into two strangers' lives. The bride was dressed in a traditional wedding gown, with a long train and veil. She was crying. It was beautiful in that church.

Except, in the vestibule, it was horrible. We were angry people watching happy people make impossible promises.

"You never asked me to marry you," I whispered suddenly, in the church vestibule. It was another layer of hurt that had been building, another barb in the line of barbs, but this one stung us both.

"But we're married!" He sputtered in anger and wheeled back around. "We just... I didn't ask because... We just agreed."

"We were engaged three days," He said, laughing suddenly. "And besides. You're not every girl. You're my favorite girl."

"It would still be nice to be asked," I said sullenly. And I sounded like a child, an irrational little girl. I was feminist, wasn't I? What was wrong with me? We had eloped; we had decided to get married three days before we actually did it. It was the second time around, so painfully close to our divorces that we still had the bitter taste in our mouth, it had made sense. I didn't need to be asked, I didn't need to be told.

"Or I'll ask you." I grinned. It had been awhile since I grinned.

When we walked out of the church, I heard the people in the pews inside clapping. They must be kissing now, I thought. First marriage, second marriage. Either way. They are as married as we will ever be.

Have you been North? We went to Canada in a Buick. Maybe we thought they'd stay behind, but our problems followed along with us, hijacking our trip.

"For better or for worse." Two years ago we had promised this on the lawn of City Hall. But when you are high on love, you will promise anything to make the feeling stay. You can not possibly imagine a "worse."

And then, two years after we floated promises out like welcome flags and laced the strings in our wedding rings, we were holding onto our worse.

This was the year of our china. It was the second year, the year we were fragile people, hurting each other on purpose sometimes and breaking promises. It was the year after the newness wore off. We were not on our best behavior, we were not careful. We were not those wild eyed lovers at the alter of the church; we were angrier, battered. We had been married before and the frailty of loss still lived with us.

We walked down the church steps and out into the garden. There was a man sleeping on a bench nearby, but behind him there was a fountain. The day was cool and fine for early July. I slipped my arm into my husband's arm and we turned away from the church, away from the man sleeping on the street. We turned away from Year Two and Year Three rolled out like the street before us. I had no idea where we were, nothing looked familiar here. It was a foreign country. I thought about asking my husband to get out the map. But I didn't want to fight anymore.

And I knew it didn't really matter which way we went. Wherever we ended up, I had faith we would end up there together. 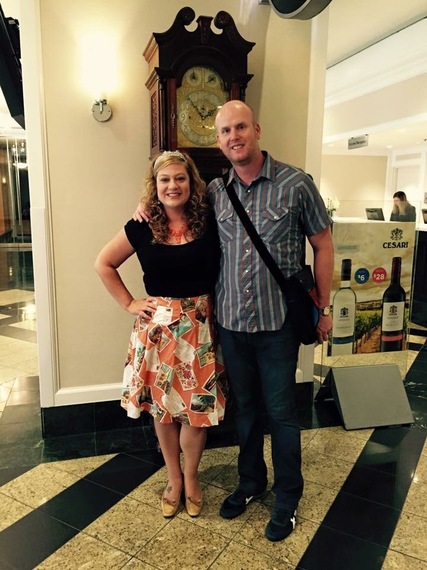 US Presidential Election 2020
Breaking news, analysis and the latest polls on the presidential race from HuffPost’s politics team
See More
Voting Made Easy
Register to vote and apply for an absentee ballot today
Register now
More:
weddingsdivorcesecond marriageLoveRelationships
Newsletter Sign Up
A weekly guide to improving all of the relationships in your life
Subscribe to HuffPost’s relationships email
Successfully Subscribed!
Realness delivered to your inbox