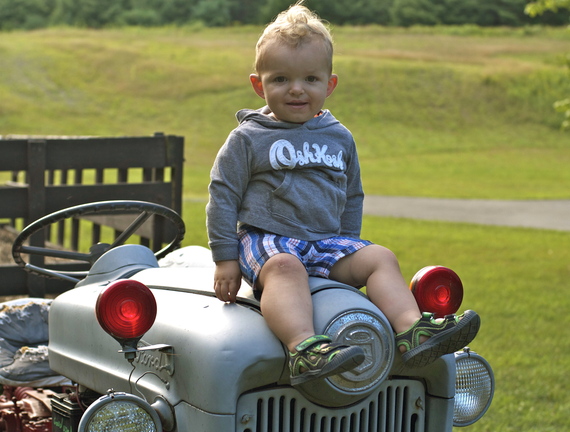 The fever strikes, and we, too, are struck by it, my wife and I suddenly jarred awake by the same cold sweat that's worked into Henry's small frame. In his 18 months of life (541 days), this is the first of these sweats, and therefore, the scariest. Mainly because it is without cause, an unexpected overture to an illness we can't yet see. Adding to our concern is that we're a thousand miles from home, tucked into a paint-peeling cabin in the Poconos. It's just far enough from civilization to ensure that we feel vulnerable, just deep enough into the wilderness to remind us that medical attention is one very rugged, mountainous drive away.

Trapped, I listen helplessly throughout Henry's first wave of wails, lost in a half-sleep that, for 18 months, I'd persuaded myself was all the sleep I needed. Meanwhile, my wife Meredith--for whom sleep has become a hypothetical--walks with her arms outstretched toward his pop-up crib, my zombie bride tripping over suitcases and still-wet swimsuits on her way to our burning boy.

She presses a hand to him and he sizzles.

"Do you want him up for the next three hours?"

The tone of her voice indicates that we do not, so I try a new tact: relying on the glow of my cell phone screen to sweep the room for the thermometer.

"Just... forget it," Meredith shouts over his wailing. "Grab a wet washcloth, would you?"

I repeat the word all the way to the bathroom, then flick on the light, startling myself by my reflection.

Jesus! I think, staring hard at the sallow-faced creature staring back. Aren't you supposed to be on vacation?

But much like sleep, vacations, too, have become hypotheticals -- another concept my wife and I once knew but now know better.

Meanwhile, just a wall away, Henry continues his ear-splitting vibrato. My blood pressure rises as he moves up the scale, until at last he hits a pitch that would put most sopranos to shame.

In that moment--as he holds his note--what I want most in the world is to take cover beneath the cool side of my pillow. But since I'm the father and this banshee is allegedly my son, I know my role is to provide protection, not take it.

Washcloth in hand, I bypass my pillow and start the walk toward his crib.

Why can't this be something simple? I wonder. A bee sting or a bear attack? Something we know how to fix.

Weeks later, long after we've returned home to a never-ending string of sleepless nights and fever-stricken days, I try to protect my son the only way I know how--by rigging the thermometer readings. I stick the probe half-heartedly beneath his arm, and upon hearing the beep, retract it with a smile.

All of this is lunacy, of course, but I am going mad -- a common side effect, I'm told, of extreme fatigue. In my sleep-deprived state, it's easy to convince myself that there is logic in tricking the thermometer into giving me the reading I require--one that reveals anything but a continual low-grade fever hovering just under a 100. Previously, I'd made the mistake of Googling Henry's symptoms; the results of which were devastating, anxiety inducing, and nothing a first-time father needs.

Prior to my son's birth, a seasoned father had warned me of the perils I would soon face. He told me that a hallmark of fatherhood was doubting oneself and failing often, but that these transgressions would pale in comparison to the more serious and unavoidable trespass: that although I would love every moment with my son, exhaustion would make certain that I hardly remembered any of it.

At least not the first year, which he'd dubbed The Year of the Great Forgetting--a phrase I'm just beginning to understand now.

Spurred by my regular, midnight consultations with Dr. Internet, I persuade the real doctors to run Henry through a gamut of tests "just to rule things out." They do -- the tests rule everything out -- and since the doctors don't know what it is, we settle for what it's not. It is not cancer, it is not Lyme disease, it is not anything we have a name for.

When I ask what to make of the continual low-grade fever, he reminds me that temperatures fluctuate, that some children just run warm.

The easiest fix, we're told, is simply to lay off the thermometer for a while.

The pediatrician's diagnosis is clear: my son's slight fever isn't half as harmful as my own fuzzy judgment.

Sure enough, two months later when we dust off the thermometer, our boy's temperature is back to normal: a perfect 98.6. He, too, is back to being perfect, just some kid who will quickly forget what his parents will long remember.

The time we made too much of too little, erring toward nightmare instead of sleep.

"Adapted from This Is Only a Test by B.J. Hollars, with permission from Indiana University Press. Available wherever books are sold."

B.J. Hollars is a writer and professor at the University of Wisconsin-Eau Claire.