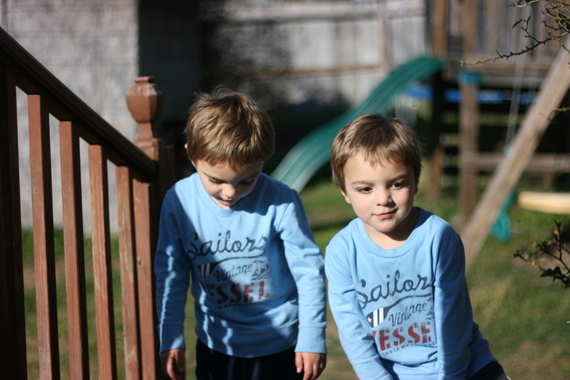 I don't know about yours, but my kids were perfect angels at 2. They were snuggly, they were respectful, they were adorable, they were brilliant, they were compliant. And the minute they turned 3, angel became devil.

This year I've had the pleasure of raising two 3-year-olds. That's been wonderful, let me tell you. You know how 3-year-olds ask a billion questions a day? Try having two of them. I'm so questioned out I could live the next 30 years without hearing another one, which won't happen. I'll hear another billion by the time I finish this sentence, because guess what? They're still 3!

Also, the number of times I've turned into a 3-year-old is quite astounding. You'd think that after all these years -- after, in fact, having survived three other 3-year-olds -- I would know better. But I'm still a sucker for getting into an argument with a threenager, mostly because they think they know EVERYTHING, and you know what? I'm the one who knows everything.

I can get myself into a lot of trouble if I say something like,

"You mean my melatonin," one of the 3-year-olds will say.

I don't like misinformation, because I spent a decade as a reporter, so, of course I'm quick to correct them.

"No, it's not melatonin. It's called Focus Factor."

Which quickly disintegrates into a clipped, matter-of-fact answer by yours truly: "I can read. You can't."

"Mama, you're doing your workout wrong," they say when I'm actually busting my rear end to get ahead of the interval training video because I'm a beast.

No, I'm sorry, I know exactly what I'm doing and you should just shut your mouth if you don't want an uppercut right to your jaw. (Not because I'd beat a kid who tells me I'm slacking while my heart rate is camped at 130. Because I'm doing uppercuts in my workout, and they're leaning in too close to tell me I'm doing it wrong.)

"I didn't have milk today," is another one of my twins' favorite things to say, even though the cup they're staring at right this very minute still has three drops of milk in it because they just finished their glass.

Um, yes you did, blindy. (To be clear, these are only the things I think in my head.)

"I'll put my jacket on," they say on mornings when we're already five minutes late for leaving, and, hey, who am I to argue, because I'm all for autonomy. Except one of them likes to turn his jackets inside out before putting it on, which I'm pretty sure defeats the purpose.

So, if I had to choose a stretch of time in my parenting that I could leap over, it would be year 3. Potty training comes at a distant second.

We're looking forward to Year 4, with high hopes that 3 will be long gone and we will have our sweet little twins back.

Wait. I can't remember. Were they ever sweet in the first place? (My gray hairs say no.)