In lieu of writing out a list of movies most people will never see, I would instead like to give some attention to a movie that will not get enough. But before that, to truly understand why this film is worthy of recognition, you must understand the climate in which it was made and released.

The 1970s film saw some of the greatest directors make some of the greatest films, but the decade also introduced new concepts behind comedy. The advent of Monty Python in England and SNL in America gave us classic comedy defining films such as The Holy Grail, Animal House, Blazing Saddles & The Jerk. These offered a relief to box office fluff like Saturday Night Fever and intense yet often sterile dramas of the auteurs (Coppola, Scorsese, Kubrick, etc.). Next thing you know, Spielberg and Lucas stepped in, and changed the climate of cinema with Jaws and Star Wars. All of the sudden, budgets shot to outer space and the studios began taking less and less risks.

1980 saw the flop that broke a studio. Heaven's Gate was such a massive monetary and critical failure it brought down United Artists even though it's director, Michael Cimino, won the Best Director Academy Award for The Deer Hunter the year before. All studios took notice, and the day of the singular visionary was ravaged. In the wake of the auteur movement came the era of blockbusters, the seed planted by Spielberg & Lucas the decade before. In the '80s there was one big budget comedy that stood tall and thrived: Ghostbusters. It was the film that informed an entire generation.

With big budget blockbusters filling seats and panoramic war films winning awards, people got weary of cookie cutter, factory print, paint-by-number bullshit and independent cinema found legs. What we saw with indies were small budgets and big risks. Enter a new era of SNL combined with the fresh voice of In Living Color, and low-budget comedies become low-risk endeavors for studios. If you grew up in the '90s, chances are you enjoyed the wave of some the best small-budget, dumb comedies to ever be sloppily made. There was Wayne's World, Ace Ventura, Dumb & Dumber, Billy Madison, Tommy Boy, Austin Powers, etc. Unlike indie films, these small budget studio flicks were making a whole mess of money. Then something happened. Chris Farley dies. Robin Williams wins an Oscar for Good Will Hunting. Adam Sandler does Punch-Drunk Love, and Jim Carrey does Eternal Sunshine of the Spotless Mind. There's a shift in the paradigm and suddenly silly isn't selling like it used to. Nobody takes an actor seriously unless he cries in a movie.

Just when it was looking bleak for foolishness and whimsy, just when we thought it might be the end of the world for gut-busting laughter... The savior of stupid, Will Ferrell, makes Anchorman with producer Judd Apatow. Then Steve Carell makes 40-Year-Old Virgin with Apatow at the helm, and there is some merger of loveable dunces with actual emotional depth. The generation that mourned Chris Farley is now making movies and reviewing movies. Critically panned in the past, Ben Stiller wins a Critics Choice Award for the sublimely stupid Tropic Thunder. Meanwhile, the public shells out big bucks for criminally awful trash including (but not limited to) colossal-budget CGI cluster-fucks like the Transformers franchise and shallow, unprogressive jerk off, gross out, star driven comedies like Grown Ups while superhero movies are crossing barriers so close into Oscar territory to no avail. That pretty much brings up to date.

Now Edgar Wright, along with the mainstay duo of Simon Pegg and Nick Frost, deserves recognition. The World's End is as exciting and wonderful in scope as Star Wars, but he sets the stage with a dumb guy, buddy-drinking movie and mixes in the imagination and genre of an Evil Dead II. What Wright has accomplished is astounding. He has sucked up every important thing to happen in film & comedy and melded it all into a seamless masterwork. Unlike his other two cinematic collaborations with Pegg and Frost (as fantastic as they may be), he has liberated himself of strict genre constraints while still reaping the benefit of classic sci-fi and horror flicks. Not only does this adventure genuinely thrill and excite and engage and entertain, it poignantly comments on the times we live in and the psychological condition our modern, media-saturated society. 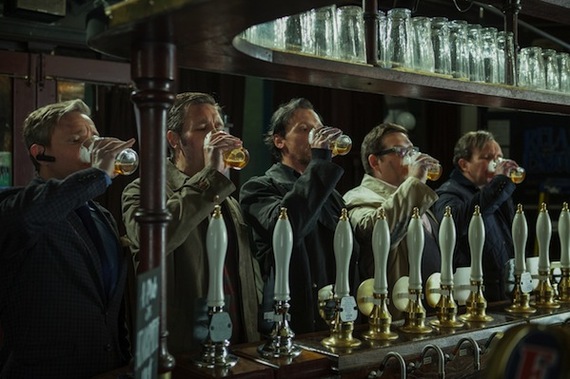 Generally, my problem with psychological analysis in movies is that it often ends up feeling sterile. It's if you're watching a (sometimes brilliant) collegiate PowerPoint presentation on how the brain works, but it's disguised as a motion picture. The two key elements in this case are: 1. Wright takes his time. You spend so much time getting to know the characters, that when the film makes clever observations and statements about culture, you're fully invested in the characters emotionally. 2. It never stops being a comedy. There is a humor about the whole thing so it feels more casual and conversational as opposed to academic and intellectual. Through the power of connecting to a piece of art with your gut and your heart fully immersed, it makes the intellectual part of the conversation more important. It sneaks up on you like an alien robot you thought was human.

Edgar Wright is an auteur filmmaker. If you look at his filmography, not only is each one better than the last, he also progressively widens the scope of what is possible. Wright's potential as a director is exponential. As one of the most remarkable achievements in recent memory, this ambitious undertaking was shot within tight budgetary and in turn, tight time constraints. The movie was shot in twelve weeks. To put that into perspective, Apocalypse Now took over sixteen months to shoot. In a world where imaginations like Terry Gilliam are not able to finance a feature for over a decade, the prodigious Edgar Wright consistently steps up to the plate and knocks it out of the park. 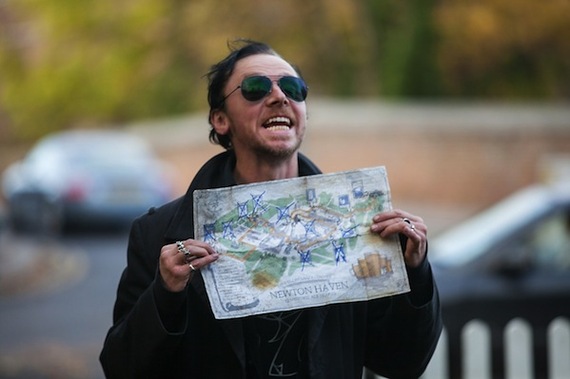 Simon Pegg plays Gary King, a man that time has abandoned, pining for the days when he was The King. His performance is deeply affecting and impressively intricate. The layers of the character are slowly pared down until we see the dark, uncomfortable truth at the core of every man. We see his fear and his faults. Pegg flawlessly and confidently waltzes from scenes of roundabout quick wit to difficult scenes of difficult fight choreography to scenes of raw, fragile, emotional nudity. This is what an Oscar-worthy performance looks like. Watching this conflicted protagonist live and die by his sword, connects us to feeling we had completely forgotten about. It's the feeling of watching a movie naively, believing in a hero. It's what it felt like watching Star Wars as a child. It is absolute enchantment. That is what the movie is about.

Technology is a force to be reckoned with. Here we are given a love letter to a simpler time. A time when you had to actually go outside to be with your friends. A time where danger and mischief where utilized as fuel. Some might write this off as nostalgia, but it's much deeper than that. It is a place past, where we believed a song could change the world and we fought and fucked and ran naked into the night. Somewhere between obligation and loss of innocence, we lose something larger than ourselves. We are confronted with our destiny and the path we've walked to get there. There is an integrity in what this story represents that cannot be denied and warrants your respect. 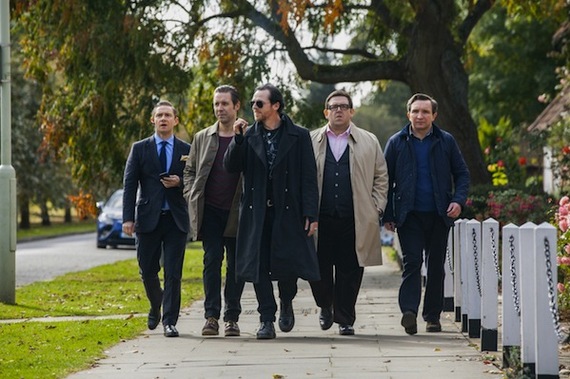 Upon subsequent viewings, all the criticisms of the movie fade away. Everything is justified. From the opening line of dialogue to the last frame of film, every move is precise. Nothing is wasted. In many ways, it is a profoundly dense comedy. There are moments of precarious darkness that are so richly juxtaposed by the levity of how supremely stupid the human race is. The World's End is a celebration of pure child-like wonderment in a world dominated by adult depression. It is a rare expression of joy like watching the sunrise on a morning after the best night of your life. Something indescribable is captured onscreen. Some waning magic, some vanishing courage, some dumb beauty. This cinema sensation will not be recognized with awards. But be there no doubt about it, The World's End is the most important movie of the year.