When my mother died in 2002, all the objects in my parents' bedroom that had once been shielded from our curious eyes were no longer private property. My father had died years before but my mother had conducted her life much as she had when he was still alive: living in the rambling house we shared with my aunt and grandparents in Washington DC, where, eventually, just she and my aunt remained. She played bridge, entertained, traveled, did all the things that she did but in a pair rather than a trio. The sanctity of her room, of their room, remained inviolate -- until it was time to go through the ritual of cleaning out and selling the family home. As the only daughter, much of that job fell to me.

Deep in the closet of my parents' bedroom was a crumbling old, brown leather, overnight bag. I had seen the bag before when my mother was alive. It was a kind of time capsule, my mother's repository of important papers: report cards and class pictures from my two older brothers and me, birthday cards, a few carefully crayoned masterpieces from elementary school, paperwork from car purchases, some house and car keys that had long ago been separated from their locks.

But now it was time to go through it again, the final sorting before the bag of once-important things was itself thrown out. At first tentatively, I still felt that I was intruding, hesitating because these items were not useless, indeed they were precious relics. Then boldly, I plunged into it. After separating the stuff of our childhood into three neat piles and throwing away papers that were useless even decades earlier when they were first put there, I got to the bottom of the bag and came upon an artifact from an entirely different time: a crumpled six-pointed yellow piece of fabric, carefully hemmed around the edges, no larger than my palm.

It was my mother's yellow star. I was startled by its presence, as if I had found something almost illegal, too powerful and too hidden for me to now handle. I flattened it on the dresser and my shock was replaced by the curiosity of being given free reign behind the velvet rope of a museum. I had always imagined that yellow stars would be made of fine, crisp cotton, not this greasy material. It felt so personal, and yet so illicit there, shoved at the bottom of the tattered leather bag.

Despite our Roman Catholicism, I always knew that my mother's family had once been Jewish (does anyone ever discover that their family had once been Gentile?). She came from a prominent Hungarian family, but in the 1920s, when my mother was still a child, the family, like many members of the Hungarian Jewish aristocracy, converted to Christianity, some out of conviction, others out of an eagerness to demonstrate their nationalistic loyalties.

My brothers and I were told about my mother's religious background when we were children and somehow, despite the strident anti-Semitism of our Washington, DC parochial school, it just didn't seem to matter much. Much like the fact that our parents were Hungarian, and we were American, the fact that her family had once been Jewish was easily consigned to the realm of things from the old country: Fabulous wealth and factories; country houses and horses; chauffeurs and servants wearing formal uniforms; dazzling jewelry and great art. Nazis.

Despite the family's conversion 20 years earlier, they were still considered Jewish when the Nazis invaded Hungary on March 19, 1944 and she, along with 40 members of her extended family, went into hiding. Her father and uncle were arrested and taken to Mauthausen. But the family was saved by a deal struck with Heinrich Himmler: safe passage in exchange for the factories and much of the wealth. In June of 1944, inexplicably, Himmler kept his side of the bargain. My grandfather and uncle were released from the concentration camp, and the family fled to Portugal.

In a diary of my mother's that I found very much later, was an entry made on April 5, 1944, while she was still in hiding: "From today, the yellow star."

And here it was.
But why would she keep it?

The star had traveled from Budapest to Portugal to the United States, where my father was the Hungarian ambassador during the brief post-war coalition government. In an album of their trip to Washington, the bag sits next to her, with an arrow and the caption, "The treasure bag." The star must have then been among her treasures. But why wouldn't she have angrily thrown the star away? Or burned it? Was it a way of showing solidarity with the 350,000 Hungarian Jews who were murdered? Did she feel guilty about the deal that saved her and her family? Perhaps the yellow star served as a reminder that she was no different. Only extraordinarily lucky.

Yet, her star was both discarded and prized among "treasures," much like the other identities that shaped our lives. Hungarian aristocrats and middle class Americans; Holocaust survivors and not survivors; Catholics and Jews. It was astonishing to me that she lived in a world where wearing such stars actually existed to mark people, yes, for Auschwitz, but also to make them conspicuously other. They may be living among you, the star said, but you will be fooled no longer. I thought of my mother and realized, for the first time, that the same way my memories are cluttered with bell bottoms or my first kiss, hers included a yellow star reluctantly pinned to her sleeve, as she hid wondering where her parents were, and where my father was.

I looked at this scrap of material, totemic, symbolic, and most important, saved for over 60 years, and I wondered, "What do I do with it now?" Then I realized: my mother had no doubt asked herself the very same question.

Now it was my turn to cope with this treasure poorly kept. Should I elevate its status, have it framed and displayed so that a guest might inquire and offer me the chance to share their story? The idea struck me as unseemly. Should I consign it to my own private collection of precious things? Wouldn't that make it too easy to ignore and forget? What on earth does one do with this discarded yet totemic relic of a time long gone, yet present in so many ways.

I took the star to my home. I ironed it. I put it in a cheap frame and placed it on my desk. And sometimes, it's as if I am seeing it for the first time. 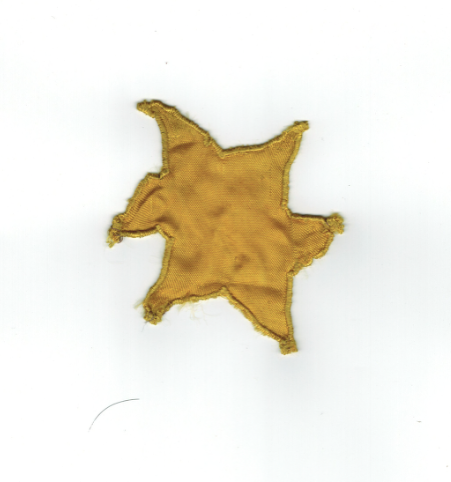