So there I was, living the good life in San Miguel de Allende just a few weeks ago, enjoying the slow lane, mucho tiempo, hot springs, frosty margaritas, blue skies, and super-conscious of just how inexpensive everything was in my new found attempt to simplify my life when Caroline, one of my colleagues, sends me an email explaining how we just got a data roaming bill from AT&T for $1,790 -- a bill that was due in three weeks.

$1,790? For roaming? Where? In the Pleiades? Pluto? Some parallel universe where the streets were made of platinum? No way, Jose. No way. Not me, Uh uh. Sorry. Not after these last six months of cost cutting and, for the first time in two years, actually having a positive cash flow. Uh uh. Nope. No can do.

Semi-catatonic, but still curious to find out which of the five phones on our AT&T plan was the culprit, I quickly discovered it was my first born, my number one (and only) son, the carrier of the family name, the Digital Media Maven, the honorable Jesse Pouget Ditkoff, a 19-year old lad at the time who, upon landing in Mexico City (and not having been on social media for the five hour flight from Newark) somehow FORGOT to turn off his data roaming and proceeded, for the next 311 minutes, while he made his way to San Miguel, to reacquaint himself with Instagram, Facebook, and who knows what other online universes, all of which were now available to him through the grace of oversized cell towers where Mayan pyramids once stood.

Yes, they stood tall and technologically advanced, but THEY WERE NOT A PART OF MY CURRENT INTERNATIONAL DATA PLAN -- the one I didn't buy, fully believing my request to both of my kids to turn off your data roaming when you get to Mexico would be the teenage mantra of the week. It wasn't.

Thus Caroline's phone call and my newly emerging existential choice of whether to offload my angst onto my son, plead insanity to the powers-that-be, obsess all weekend, or... THIS JUST IN... choose not to entertain a thousand dark thoughts about DEEP DEBT, RIP OFF PHONE COMPANIES, or TEENAGE FRONTAL CORTEXES -- which, after getting the low down from Jesse on what actually happened, is what I chose to do -- a kind of super mental tantra I am not usually good at, especially when an unexpected large bill heads its ugly rear and begs for my attention -- a cognitive bummer, disguised as a thought, that like a relative who talks too much and doesn't know when it's time to leave takes up entirely too much space.

This thought, this "YOU OWE THE PHONE COMPANY $1,790" thought quickly took up residence in what was left of my mind. Or tried to... I should say. It pulled up a chair. It kicked off its shoes. It opened a beer and starting watching a 57" flat screen TV I didn't even have.

It was then that I knew what I had to do -- CHOOSE!

I could either let this obsessive thought in and take over my house, or I could ignore it. Realizing, it was too late, on Friday afternoon, to ask for mercy from AT&T's customer service department, I was going to have to ride this one out, ducking the gale winds of my own fevered mind and choosing again and again not to engage the unwanted very expensive data roaming thought in my head for the rest of the weekend.

Easy for me to say. But thought, especially BIG HAIRY THOUGHTS have heard it all before from people like me and know exactly what to do to persist and grow larger.

Ah... but the plot thickens.

That night, you see, my amazing wife, Evelyne, and I had been invited to a sumptuous party with all kinds of great people in costumes and good moods, Day of the Dead statues all around us and music that begged you to dance.

Perfect! The environment was perfect. Like someone from Central Casting was going for an Academy Award just as the fun began, the invisible, subatomic, off the grid, holographic fun known in some parts as "God's Play."

As the fabulous Mexican evening wore on I couldn't help but notice that no matter who I was talking to, there was a kind of ghost behind them, rising slowly from the ground, a fat ghost, a slightly drunk and off putting ghost, a bulbous entity not unlike an overweight high school geometry teacher who took great pride in making kids uncomfortable with his news of cosines and tangents and pop quizzes on a Friday afternoon.

This ghost had a name -- the "DATA ROAMING GHOST", the "YOU BETTER START GETTING YOUR RAP TOGETHER, MITCH, BECAUSE YOUR SO-CALLED CASH FLOW IS ABOUT TO END UP IN THE TOILET."

Nice try, thought! But I'm not buying it! It's Friday night and I'm at a party. Sorry, dude. There just ain't no room for worry tonight. You can huff and puff as much as you want, but I'm not paying attention to you. None. Like zippo, nada, zilch. I've got other things to do. Comprende, senor? Lo siento mucho, bro, but I'm not playing your game. 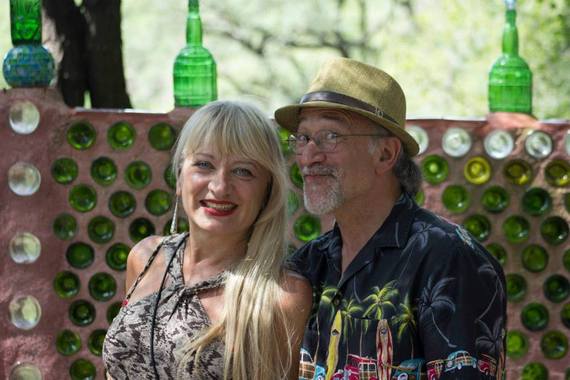 OK. Yes, I will admit, there was a time, in my early 20's, after reading way too many Zen Buddhism books, when I thought that one day I would live in a realm of ABSOLUTELY NO THOUGHT -- hanging out, as I imagined myself to be in some large, perfect, empty calligraphic Zen circle, the circumference of which would be lined with motionless monks who had long ago reached Satori and were now simply sitting or writing haiku in the sand.

Sorry, Zen friends, but it's not about that and never was. THAT whole scenario was only a thought, one among many high class thoughts that weighed me down.

This, shall we say, went on for the entire weekend, the DATA ROAMING THOUGHT popping up again and again like a teenage zit right before the senior prom... but I did not engage, choosing LIFE over DEATH, the PRESENT over the FUTURE, BEING over DOING.

Monday came round fast enough. Oh yes, it did -- the long awaited time to deal with the customer service people of the big telecommunications company and see just how service-oriented they were.

As I slowly dialed, I prayed to get someone compassionate on the other end of the line, someone not cranky, angry at their spouse, underpaid, under appreciated, hypoglycemic, menstruating, or reading from a script while pretending NOT to be reading from a script, trained as they were by the AT&T gods to listen to the customer so they could skillfully diffuse my angst while simultaneously reminding me of THE POLICY they were, by the power of their almighty Over Lords, paid to uphold.

Fortunately, I did not get that guy. I got a human being -- a very lovely man named "Daniel" who was "happy to help me" and "would do what he could" to resolve the situation.

He listened. I spoke. He listened some more. I spoke some more. I told him there was no way my 19-year old son, working all summer to pay his college tuition, could afford to pay $1,790. On and on I rambled, while the very unrobotic and Bodhisattva-like Daniel continued listening and finding new ways to let me know it was all going to be alright.

"We can just re-rate you" he explained.

Daniel went on to explain that "re-rate" is what AT&T does for its customers lost in data roaming land. Basically, they just sell you, retroactively, the data plan you should have bought before leaving the country.

So now I'm doing the math and figuring I still owe $600 or some other very large amount of dinero so AT&T's honchos can afford to send their own kids to college.

Was there no end to my good fortune? Daniel, dear Daniel, who I was now talking to as if he was my best friend, had just reduced my data roaming charges by 98%. That was it! That was all it took! One simple calculation based on one simple concept and one wise decision made by AT&T not to rake their customers over the data roaming coals.

Relief! I was relieved.

Mitch Ditkoff is the Co-Founder and President of Idea Champions, a Woodstock-based consulting and training company specializing in creative thinking and innovation. He realizes that he has a choice every minute of the day of what to focus on and is doing is best to focus on that which can never be quantified. Or, as Einstein once said. "Not everything that counts can be counted; and not everything that can be counted, counts."