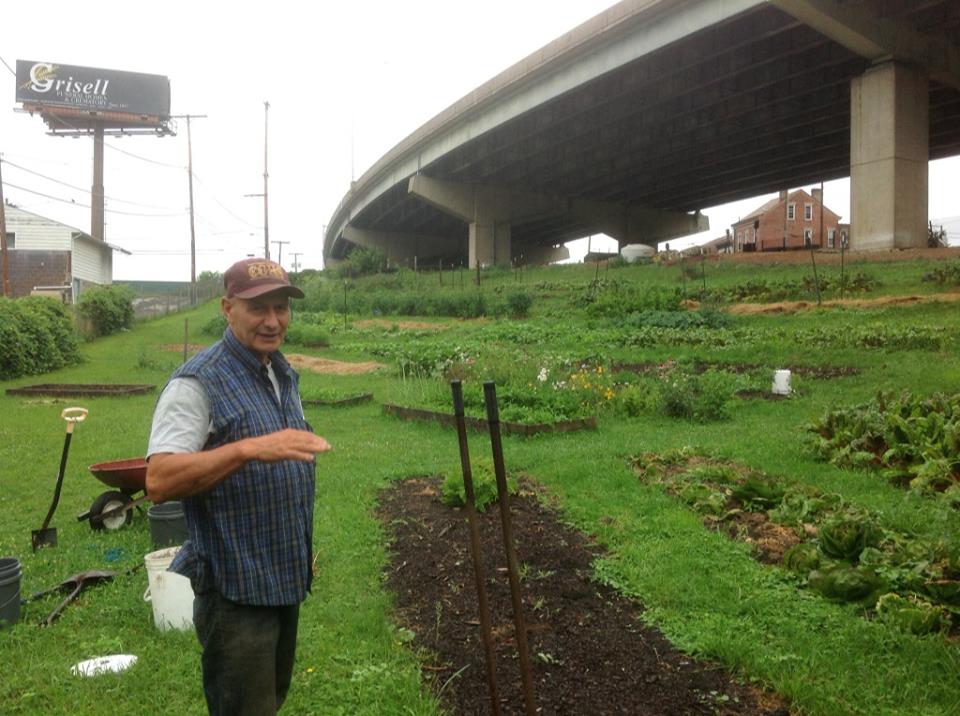 My hands in the soil eco-theology transcending my nature-deficit-disorder Farm Yatra summer tour continues as I return to a place I called home for two very formative years in my life: the New Vrindaban bhakti-yoga spiritual community, located in the Appalachian foot-hills of the Northern Panhandle of West Virginia, where I had previously lived as a monk in the bhakti tradition. New Vrindaban is the home to the Small Farm Training Center (SFTC) project, a "land based educational center and a hands-on working organic farm" with the purpose of creating "community -- a web of supportive relationships -- by making locally grown organic foods readily available and affordable with the use of simple technology." The SFTC wants to create "paradigm warriors" who can "expand the conversation and are fluent in the language of inclusion, kinship and possibility" in relation to our existential ecological crisis. I'll be here for over a month and I will be blogging on the many facets of this dynamic and spiritually revolutionary project.

For my previous Yoga of Ecology blogs on my time with the biodynamic Episcopal sisters at Bluestone Farm in Brewster, NY, click here and here.

The photo above is an epitome of the potential and reality of urban agriculture. This is the 18th Street Overpass Garden in Wheeling, W. Va., one of the community gardens which is part of the Green Wheeling Initiative. The image juxtaposes so much of what it means to try to create a green-collar economy, a sense of ownership and empowerment over one's local community and local food sources. The beautiful garden, deep in its nourishing color and emanation of a literally life-giving aesthetic, stands in contrast to the huge modern sculpture of the overpass, a type of "artwork" which has long outlived its fashion and utility. The billboard in the background advertises for a local funeral home. One can suppose the ad is hardly needed. There are few more eternally profitable and stable businesses. In a place like Wheeling and in Appalachia, in the "belly of the beast." where nearly one in four people live below the poverty line and where West Virginia has the highest obesity rate in the country, questions of life, health, death, and food culture hang ominously in many spoken and unspoken places. If one can empower the people of Wheeling to create their own local, healthy, and ecologically-sound food culture, then one is creating justice, spiritual hope, and real honest-to-goodness happiness in a place where such things seem to have been long since lost in the most visceral and essential sense.

Standing in the Overpass Garden is Terry Sheldon, one of the founders and movers of the Green Wheeling Initiative, and the head of the Small Farm Training Center project at the New Vrindaban community near Wheeling. I had previously worked with Terry during my time as a monk in New Vrindaban, and I have also written about the SFTC project here. The GWI is an extension of Terry's vision of his own work and service to the local community, driven by his understanding and his spiritual obligation to share the wisdom of the true sustainability of the soul. It is a vision of "no-harm" farming, as Terry writes:

West Virginia is hurdling towards local foods. The day is coming when grocery store shelves will be stocked with blueberries from Beckley rather than Beijing. Kudos to the ag. economists, policy makers in state government, NGO think tanks (like The Hub) and the growing numbers of pioneer-spirited, small scale farmers and gardeners statewide. That's the good news.

Now the bad news. Most West Virginians aren't paying attention. They reside in urban and rural food deserts where affordable healthy food is out-of reach. They suffer from junk food malnutrition, buy inexpensive processed food, drink large amounts of soda and are reducing their life expectancy. Their diseases--chiefly diabetes and obesity--are not preventable without lifestyle change from the bottom-up.

Simply stated, the local foods movement is out-flanked and out-financed by the titans of the fast food industry. Following Big Tobacco's lead, fast food advertising is targeting youth, the poor and the uninformed. No number of feasibility studies or private foundation grants can usher-in a local food economy from the top down. Why? Because the food choices and self destructive eating addictions that drive West Virginia's health crises are the result of policies favoring commodity-based agriculture over community-based agriculture. It currently takes approximately 25 acres of land to satisfy the average West Virginian's appetite for an animal-centric diet.

Our vision of the future? Home economics classes returning to the public school curricula. Small scale organic "farmetts" dotting the suburban, city and small town horizons. Food mentors, not armed guards, in every school, every day-care and every housing project with the skills to teach every child the basics of a healthy-food lifestyle.

The Green Wheeling Initiative is a down-home, ground-up, grass-roots revolutionary food justice and cultural movement which is responding to the food crisis which threatens not only our health and well-being, but the integrity of life for so many living entities on this planet. It is those entities on the margins, because of their race, economic condition, their species and what is considered the correct utility of their existence, who are the most unjustly treated in the trenches of this crisis. The GWI is a response of environmental justice that represents real courage, clarity, and compassion.

The goal of the GWI is simply the restoration of the very idea of community that has been lost in the industrial-technological civilization of the overpass. The 18th Street Overpass Garden is not the first garden ever to rise in that particular neighborhood of Wheeling . Before the overpass went up, there was a real sense of place which has been now been paved over. The folks behind the GWI are trying to remind people that their backyards are something that truly belongs to them. They are trying to remind people that the bounties in those backyards can provide them with a quality and quantity of life which no corporation or outside interest has the right to co-op. It is the inalienable right of the people in this and any community to cultivate, grow, share, and enjoy the fruits of their very sustenance.

Our mission is to build a local food production and distribution system that saves energy, creates jobs and circulates more money into the local economy. We partner with local farmers, community gardeners, schools and businesses to make fresh food available and easily available. We are Wheeling's green future.

In the past few years, Terry, along with co-founders Danny Swan, the pioneer of East Wheeling Community Gardens and a regular vendor at Wheeling's Farmer Market, and Gene Evans, an adjunct culinary arts professor who is currently teaching in Parkersburg, W. Va, have created a community garden network of 20+ gardens in the Wheeling area. In short time the GWI attracted the attention of private foundations such as the Hess Family Foundation and the Claude Worthington Benedum Foundation, who have given the GWI over $80,000 in grant money. The GWI regularly offers organic community workshops in the Wheeling area and its influence and inspiration continues to grow (pun intended) upon a wide and diverse swath of peoples in the Wheeling area (check out local reports on the GWI here, here, here, and here.)

There are also five ongoing raised-bed garden projects in local schools in the Wheeling-Moundsville area. Some of the current initiatives of the GWI include a grant-funded study on "Bringing our Food Dollar Back Home", which would explore shifting 10 percent of the local economy towards community gardens and localized food cultivation, along with urban-gardening micro-grants which would serve as a clearing house for persons interested in start-up money for community gardens. The GWI is also developing a campus ecology project, which would help to create strategies for measuring the ecological footprint of local universities and colleges. Students would design their own audit projects for their schools. An initiative is also in the works to help make SNAP (food stamps) double in value at the Wheeling Farmer's Market when people use them to purchase healthy, locally grown foods.

In our next Yoga of Ecology piece we will take you on a tour of a day in the life of the Green Wheeling Initiative.