In the late 1960s, when the acclaimed Vedic scholar/teacher A.C Bhaktivedanta Swami
Prabhupada brought the timeless tradition of bhakti-yoga to the Western world, his vision of spiritual renewal for a society caught up in the throes of tremendous upheaval included a bold yet elementary cure.

Coming as he was from the sacred Indian village of Vrindavan, from a culture where sustainability and a respectful relationship with the Earth where inherently coded into the fabric of life, he knew that the massive disconnect in society at large was the effect of being disconnected from our most natural heritage. Borrowing a phrase from Mahatma Gandhi, who had influenced him as a youth, he challenged and inspired some of his first students to imbibe the ideal of "simple living and high thinking."

Swami Prabhupada understood that the complexities of modern life could be a serious impediment to one's spiritual growth. If one could live very simply, off the grid as much as possible, growing one's own food and providing for one's own necessities, and following in the traditional and modest cultural example of bhakti-yoga's heritage in India, then the possibility of enlightenment even amidst the insanity of 20th-century life would be strengthened.

Now, over 40 years later, as life in the 21st century presents its own set of complications, "simple living and high thinking" is more prescient and vital than ever. Many of Swami Prabhupada's students who took up this challenge have struggled and failed yet endured to create the kinds of rural communities and cultural examples that he wanted.

During my time as a monk in the bhakti-yoga tradition, I worked for one year with Terry Sheldon, one of Prabhupada's students, on his organic farm project in the Ohio River Valley near Wheeling, W.Va. His Small Farm Training Center (SFTC) is Terry's offering to the world on how we can practically, theoretically, and spiritually understand our relationship to the planet which gives us our life, breath, and heart.

Although I've spent 30 plus years farming and gardening in Appalachia, I don't consider myself a "local." You might say I'm spoiled. My grandfather's farm in Northern Michigan, where I was raised, is both flat and fertile. West Virginia hillside farming is daunting. The soils here -- like the air, the streams and the people themselves -- have been used and abused for 150 years.

The "real" locals, those who can trace their heritage back for two or three generations, love Appalachia. That spark of original mountain culture permeates their very being, Unfortunately, their bodies tell a different story. Morbid obesity and diabetes are the norm. That's the price you pay when you no longer grow what you eat and eat what you grow.

Something is out of balance. The Small Farm Training Center is one of many local organizations challenging this dying paradigm. We farm, we garden, we teach, we encourage, we improvise and most importantly we listen to input... We nourish both person and place."

While I was there, this city-slicker suburban Super Mario kid learned how to plant, grow, and harvest a number of different vegetables and fruits, how to drive a 60-year old tractor, how to use mulch and goat poo to fertilize, how to pull weeds out with the right torque so they don't grow back, as well as helping Terry bring some of his work, ideas, and motivations into the digital world, into a blog that eventually became the Yoga of Ecology.

I was drawn to Terry initially because of the stories he told me of his days in the "radical" hotspots of Ann Arbor and Berkeley back in the 1960s. The spirit of his youth has not dulled a bit, due to his deep-rooted spiritual convictions. He wants those who join him to become "paradigm warriors":

"If you're one of those people who passively accept corporate domination of America's food supply and political life, be forewarned, we don't... They want us to believe that industrial agriculture is the only way to feed the world. That's a lie. They want us to believe that it is cheaper to destroy the earth than to take care if it in real time. That's another lie... We disagree. We choose life and we're going to tell our own story. We're looking for paradigm warriors who can expand the conversation and are fluent in the language of inclusion, kinship and possibility."

Terry's vision, like Swami Prabhupada's, is expansive, dynamic, and rooted in the earth and in the spirit. He advocates eight key tenets of sustainable development, including food independence, vegetarianism, cow protection, and an ecological framework based on the wisdom of the Vedic tradition of India. From the bottom of his heart, Terry wants to change the very soul of our over-burdened and over-stimulated shared cultural mainframe into something which can point us towards the sustainable and eternal.

Terry offers an internship program open to anyone who shares his inspiration and who would like to help him make it spring up from the ground. My own experience working with him has helped me to deepen my own calling in terms of understanding how to bring our spiritual and ecological concerns into working harmony.

Alongside all of this Terry's vision connects to the communities around him in the Ohio River Valley, through the relationships he has cultivated with local soup kitchens, environmental organizations and universities, and urban gardening initiatives in Wheeling. 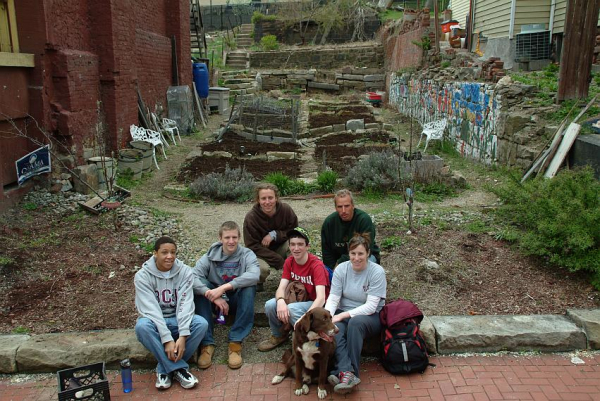 If you have a "green thumb", if your fingernails are constantly caked in dirt (like Terry's), or if you simply desire to make our ecological footprint more sane, then Terry is a fountain of knowledge to take advantage of. He is one of many "paradigm warriors" helping us to understand the sacred and essential calling we all have to the planet we live on, and to the many sources of life and spirit that surround us everyday.