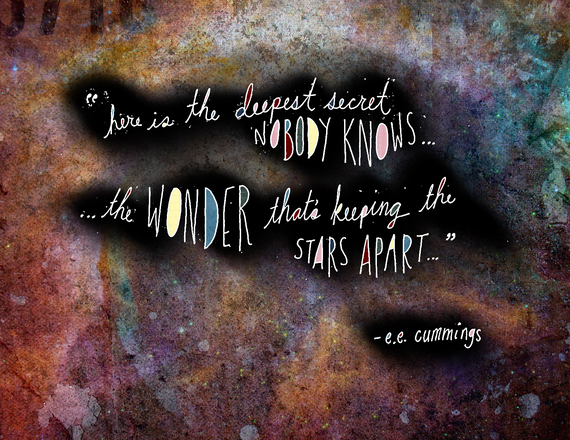 I had the gift of being with my grandmother as she died, slowly, over the last few days before winter turned to spring. When I got to hospice, she was half-paralyzed and unconscious, in a coma following a stroke. Her eyes were closed and her mouth stuck open, the lips stretched and achingly dry. She was resting under a patchwork quilt, which she'd gather with her one working hand every so often, pulling the blanket up towards her chin. It was a gesture I'd seen her do a thousand times, veiny white fingers gathering fabric between thumb and forefinger. And it made me believe there was still some of her there.

That, and the sound of her breath.

At night, the two of us were alone. The cot they'd given me was thin foam on a wooden board just a couple feet from her bed. I tried to sleep, but the sounds kept me up. There was the clock, with its ironic tick-tocking, and then the irregular, rasping suction sound of grandma's breath. The air that moved out of her seemed at such odds with what she sucked back in.

Full minutes would pass with only the clock sounding where she wouldn't breathe at all. I'd sit up in the dark, holding my own breath and straining to see her chest, waiting and wondering if this was it. Then the Shwahhrgghhhahoooosh as she inhaled, choking on her own saliva for godawful periods of time that the nurses said was just part of the process. I'd lay back down in that way that is not relief, but rather fear subsiding, and jam the pillow over my head. The second night, I left the music on -- one of our favorites, the Glenn Miller Orchestra -- so I wouldn't have to wonder.

Somewhat ironically, I'd lose my dog six months later because she, too, couldn't breathe. She was diagnosed with severe, non-regenerative anemia. Her body stopped being able to make the red blood cells that carry oxygen to organs and cells. But I didn't know that till the end. In the beginning, all I knew was her panting breath. How loud it seemed even at night or on anything beyond a crawling walk. At first I just thought she was getting old. She still loved to chase bears and coyotes and cats. But within a few short days she stopped, watching from her bed as a squirrel crossed her stairs. That's when her eyes began to change, too, and I knew that I had to let her go. Love of my life. Without the breath, there's only so much our bodies can do.

My grandma taught me that.

Losing these loves taught me something else, too. I began to believe in a certain sort of magic. The moment my grandmother died, I was on a ski run watching my friend falling head-first towards a tree, out of control, on his back, at full speed. I screamed louder than I ever have, yelling for him to DIG IN, DIG IN! He stopped a horse's hair from the tree, like a big old wind had just blown him still. Two minutes later, my dad texted to say my grandmother had passed at 12:07, just a few minutes before... at the exact moment he'd been heading towards the tree.

With Myla, it was different. I was there. I was the one who told the vet, yes, it's time, and watched my dog's eyes go distant and flighty as her panting grew ragged. Her last act in that body was tucking her eyes under the cover of my knee. Mine was to chant, my voice catching on tears and snot as I sang a Lakota Forrest chant with both hands on her body as her breath stopped.

"Aho wichi tayo, wichi tayeh... We all fly like eagles, soaring so high... Circling the universe on wings of pure light."

In the moments after the vet declared her "gone," that her heart had stopped, I was seized by an intense burning in my own chest. I felt on fire. Serious heat. My shirt was unbearable, the thin cotton like metal armor, which I started to yank off before realizing that I was surrounded by people in a crowded parking lot. So I stopped, fanning myself instead, waiting for whatever it was to pass through me.

I am not a scientist or a guru, and I have no other way of explaining what happened in those moments between Myla's death and me in a parking lot trying to pull my shirt off, or my friend heading straight into a tree, but I have a belief. It's one that makes my heart hurt a little less when I think about the loves I've lost. And it is this: What if the breath is not just the air that moves through us and keeps us alive, but the thing that is actually alive. The breath as sacred, the breath as spirit. What if we are nothing more than vessels for these spirit breaths that flow into and, someday, out of us too?

As Hafiz once wrote, "I am a hole in the flute that the Universe's breath moves through."

"here is the deepest secret nobody knows
(here is the root of the root and the bud of the bud
and the sky of the sky of a tree called life;which grows
higher than the soul can hope or mind can hide)
and this is the wonder that's keeping the stars apart

Voting Made Easy
Register to vote and apply for an absentee ballot today
Register now
More:
yogahealthy livinglosing a loved onehealingbenefits of yoga
Newsletter Sign Up
The essential guide to taking care of your mind and body
Subscribe to HuffPost’s wellness email
Successfully Subscribed!
Wellness delivered to your inbox