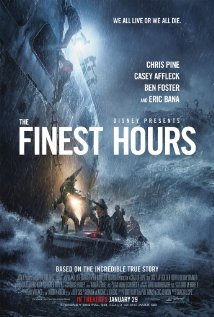 On February 18, 1952, a massive winter storm, a fierce nor'easter, struck New England. At sea, the SS Pendleton, an oil tanker bound for Boston, was ripped in half, trapping more than 30 crew as it began its inescapable descent into the black, roiling ocean. On shore, in Chatham, Massachusetts, the US Coast Guard station received word of the ship's catastrophe. The Guard's Chief Officer, Daniel Cluff (Eric Bana), an outsider to the town and despite the wisdom of seasoned local seamen, ordered a young officer to gather a three man crew, face the icy seas and gale-force winds and attempt to rescue the Pendleton's likely doomed men in the only vessel available, a way too small wooden boat.

Heading up the rescue was Bernie Webber (Chris Pine), who remarks in this film that Coast Guard rules are that "you gotta go out...you don't gotta come back." He is our everyman hero. The film counterpoints his romance with Miriam (Holliday Grainger), looking very early 1950s and ahead of her time as an outspoken woman, with a male maritime culture and the dangers and occasional brutality of life at sea.

What is the mystery of human nature that propels some to take extraordinary measures, putting themselves in great peril to assist others, even strangers? It is of course a Christian virtue to sacrifice - from the Latin sacrificare or to make holy - but the mission depicted in this film is not in the name of Jesus, or to atone as in Judaism, or to gain redemption. The actions of these four servicemen are inspired by duty and human kindness, virtues that seem is short supply in what has been called our "age of narcissism".

What is the greatness that can emerge from everyman that makes him or her a hero(ine)? Hollywood studios recently seem to have found human storylines to offer more terrestrially set yet elevating narratives instead of yet another invincible superhero tale. Consider, for example, Bridge of Spies and The Martian. While there are no clear answers the more we plumb the mystery of being human the more we appreciate that it is circumstance that gives us a chance to transcend the mundane, for heroic acts small and great, even if we can't be Superman or Wonder Woman.

Meanwhile, 10 miles out from the nasty snowstorm ashore, the men of the stern of the Pendleton are doing their best to survive. Not an easy task if the full front half of your ship has sunk. But they still have engine power (but not for long), a rudder (that they have to fabricate), and a functioning propeller. More so, they have Ray Sybert (Casey Affleck), the man running the engine room. A loner disdained by most of the other men, Sybert is another archetypical everyman hero who has to earn the trust and respect of the other men to keep them alive. His grit and capabilities mirror those of Bernie Webber, making this true story all the more compelling because alone neither of their efforts can succeed yet together they keep hope alive. Heroism is a mélange of courage, determination, and skill -- and it helps to have a touch of luck. A rescue of this magnitude and daring, recognized as the greatest small boat rescue in Coast Guard history, took both men, their extraordinary actions, and their very good luck.

This is a film about 'doers' - men and women defined by what they do, not what they say. The screenplay (by Scott Silver, Paul Tamasy and Eric Johnson) makes that point in its dialogue - perhaps more than needed because actions speak for themselves. It is also a film about the power of community; at a crucial point, and I will not say much to not be a spoiler, Webber says "We all live or we all die." And so it is aboard each vessel, the small rescue boat and especially The Pendleton, because it is only when the men align with each other to stay alive do they become a collective force to be reckoned with against the pummeling sea and storm.

Thirty two men were saved and all four of the Coast Guard team survived. It surely helps for a movie to have a great story to tell. But its rendering is no small feat. Bring warm and waterproof gear to watch this movie because you will feel at sea with the men in both ships. The calibre of the direction (by Craig Gillespie) with its intimate close ups of the men on shore and in both boats and the pace, momentum and suspense created; the keenly underplayed acting; the soaring musical score; and the believable digital images (which I saw in 3-D) of the heaving and pounding sea will transport you to the time, place, people and community of this historical and very human event.

Ernest Hemingway's fame was not set until late in his career when he gave us The Old Man and The Sea, which was written in 1951 and published in 1952, the same year as this great rescue. Hemingway was able to take readers to sea, to have us feel both a man's inner struggle and outer battle with the forces of nature, and to make a hero of an unlikely and lonely fisherman. The Finest Hours takes us on another boat ride to remember. It places four younger men at the helm of another nautical adventure that reveals the remarkable about humankind. The audience applauded when the credits began in the NYC screening room where I saw the film. They had reason to cheer: score one for human nature.

............
The opinions expressed herein are solely my own as a psychiatrist and public health advocate. I receive no support from any pharmaceutical or device company.

My book for families who have a member with a mental illness is The Family Guide to Mental Health Care (Foreword by Glenn Close) -- is now available in paperback. I am completing a book about some secrets of psychiatric practice.