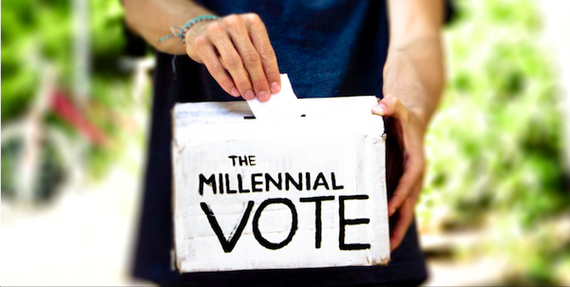 Truth: Millennials don't vote in off-year elections. Conversely, in momentous elections -- like in 2008 -- get-out-the-vote campaigns aimed at youth voters are extremely effective. Which leads me to one question: how do we get my generation to turn out in local and off-year elections?

Well, the answer is right in front of our faces. A recent study from the Knight Foundation, entitled "Why Millennials Don't Vote for Mayor" highlighted quite effectively what the problems are. And number one among them is the lack of local media coverage around local elections.

Every four years, local media turns into a one-stop shop for all thing elections. Including endless political ads, run-of-the-mill political panels/debates, and a constant stream of images from political rallies and candidate events. These images captured on our home television sets and hometown newspapers force us to focus on an election that, truth be told, really doesn't impact our daily lives.

Let's be real, neither President Obama nor any of the other candidates running to occupy 1600 Pennsylvania Avenue can affect the stop sign on your corner or the amount of local funding that goes to supply affordable housing in your community.

Former House Speaker Tip O'Neil once stated that' "all politics is local", and real change is local as well. So if we truly want to change our country, we must take the time out to focus on what is happening in our local communities -- meaning that my generation has got to get out and vote in off-year elections.

With that being said, it is also the job of local journalists and news outlets to collect, write, and distribute news that affects our local communities. And they are doing my generation a disservice if they aren't giving local elections the same time allocation as presidential ones.

I get that a lot of our local outlets are cash strapped and are feeling the pinch of our economic woes, but it doesn't mean they shouldn't be doing their jobs.

As more and more Baby Boomers retire and Millennials become a greater share of the voting population in this country, I urge local news directors, editors, and even bloggers to begin engaging with your new audience. And that starts by listening to the younger folks in your newsrooms during an editorial meeting they know what they are talking about.

Your audience cares less about endless news reads, and cares more about the issues that are affecting them on a daily basis.

And for local candidates, don't wait on until election day to get in front of the camera -- start right now!