Forget the Champs Elysees. If you really want to experience climate change this week, travel west along the banks of the C-6 canal and through the clots of cars on South Okeechobee Road to the Milander Center in Hialeah.

There, in the cultural center of Florida's fifth largest city, a film of a pink-faced, black-suited man haplessly filling ice trays in the surf plays continuously on a wall. "This water she can tell stories," a plaque declares. "150 miles out she drowned an entire village ... and she's about to do it all over again."

On an opposite wall, a blue and yellow poster beseeches, "Learn how to reduce your WAIST (Western Antarctic Ice Sheet Threat) Line!" A chart asks visitors to stick a star on a spot indicating how deep in water they will be in 60 years - all the way up to six feet. Paintings of sea creatures and images created with Arctic sea ice fill other areas of the center's display space.

All are the creation of Xavier Cortada, artist in residence at Florida International University, whose work is inspired by science and the natural world. The exhibition, called Clima, opened on November 30, the first day of the United Nations Paris Climate Change Conference, and will be on display through January 29, 2016. During the 12 days of the Paris meeting, Cortada is organizing activities for local residents that include a pesticide spelling bee, a wilderness wake, and an origami-type project in which people can print their property records, fold them into paper boats, and float them in the Milander Center's fountain. Together with Florida International University, the City of Hialeah, and cleanenergy.org (a solar advocacy group), he will also host expert panels during the Paris talks on local environmental issues.

"As Paris talks, Hialeah acts," Cortada announced to a room of more than 100 people on the exhibit's opening night, adding that climate change "is a global problem with local answers."

The show's opening week also overlaps with the Art Basel fair on nearby Miami Beach, where sea level flooding has been given a spotlight by Vanity Fair magazine and in presidential speeches. But while workaday Hialeah may be less glamorous than the beach, the city is extremely vulnerable. It was once an extension of the Everglades - Native Americans called it the "pretty prairie" - and sits on porous stone that drains poorly.

Unlike those communities, where property values are higher and residents generally have more disposable income, Hialeah's population tends to be less financially stable, Cortada said. "It's a working class community of people who have to work really hard to make a living and have the most to lose if they were to lose their property values, since their entire wealth is wrapped up in the equity in their home," he explained. "And it's a community built by Cuban immigrants, many of whom lost their properties to the Cuban revolution five decades ago and will probably lose their property again - the homes they worked so hard during their exile to buy - five decades from now."

Mayor Carlos Hernandez, whom Cortada incorporated into his opening night exhibit by having him stand on the Milander Center's staircase, surrounded by melting ice blocks and yellow "caution" tape, said municipal governments are being forced to take measures to save their communities. "If the water's up to our ankles, we have to take action quickly," he said. "Sadly, we live in a society where most people are more informed about their professional (sports) teams than about things like this. These kinds of events are important." 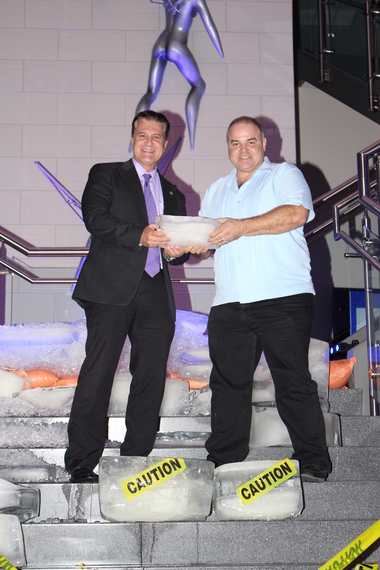