For acclaimed Chicago-based artist Theaster Gates, community revival all comes back to his training as a potter -- a practice in which “you very quickly learn to make great things out of nothing.”

That’s exactly what Gates has done with Dorchester Projects, part of an impressive cluster of formerly abandoned buildings on Chicago’s South Side that Gates has renovated into cultural hubs and community gathering sites in the struggling Grand Crossing neighborhood.

It all started with one two-story house adjacent to Gates’ studio on South Dorchester Avenue, Gates explained in a recent TED Talk. Purchased in 2009, the building today serves as a micro-library called the Archive House. A number of sister properties, including the Listening House and the Black Cinema House, soon followed. The hubs quickly began to attract attention from “very significant people from the city and beyond who find themselves in the middle of the 'hood,” according to Gates. 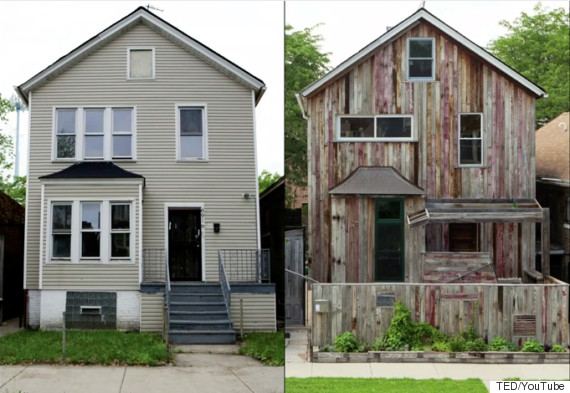 The Archive House, the first of Gates' Dorchester Projects, before and after. As is the case with Gates' art, the Archive House and his other sites incorporate many reclaimed materials.

Gates’ sites serve a number of functions to the communities that surround them. The Black Cinema House hosts regular screenings and discussions catered to people of the African diaspora. One recent program, “The Divine Feminine,” showcased video and performance-based works from artists of color exploring themes of femininity.

The Listening House is home to portions of the Johnson Publishing Company collection, including back issues of Ebony and Jet magazines, and an archive from the city's late great shop, Dr. Wax Records.

But Gates’ vision for a revitalized South Side doesn’t stop there. His non-profit Rebuild Foundation is currently working to renovate the long-closed Stony Island Bank into another cultural hub, and he has his eye on more development in the future.

“Nothing had happened there. It was dirt, it was nothing, it was nowhere,” Gates said. “But if we can land kind of a miniature Versailles on top of that and connect these buildings by a beautiful green belt, this place where people never wanted to be would become an important destination for folk from all over the country and world.”

Recognizing that he can’t “export” his work, Gates had advice to offer other communities such as Akron, Ohio; Detroit, Michigan; or Gary, Indiana, who are similarly working toward revitalization.

“When there are resources that have not been made available to certain under-resourced cities or neighborhoods or communities, sometimes culture is the thing that helps to ignite [communities],” he said, adding, “If you start with culture and get people reinvested in their place, other kinds of adjacent amenities start to grow and then people can make a demand that’s a poetic demand and the political demands that are necessary to wake up our cities also become very poetic.”

WATCH Gates discuss the project in a TED Talk, above.