Scientific experiments that fail to produce the expected result are not "failures." They provide information and feedback and insight; they have value. So it is with an interesting but flawed play. The Effect is a provocative experiment gone awry. But it's intelligent, well-staged and well-acted. If only all theater that didn't quite work could be this enjoyable an evening.

It's unlikely the people involved in the experiment we witness expected to enjoy themselves. They're going to be taking an experimental drug that ups their dopamine levels; to gauge the full effects, they'll be in lockdown for four weeks. Connie (Susannah Flood of Tribes and Mr. Burns...) is a little uptight, a grad-student who sees this experience as a chance to observe trials like this from the perspective of the human guinea pigs. Tristan (Carter Hudson) is a bearded, carefree spirit. He's going to grab the money they pay him to head for the hills, hiking and experiencing life. Connie has a boyfriend; Tristan is flirtatious and fun.

Dr. Lorna James (Kati Brazda of Our Town and A Moon For The Misbegotten) is a no-nonsense scientist who doesn't want any shenanigans interfering with her test results. Needless to say, it will.

Elevated levels of dopamine - we're told - can have a profound impact on emotions. Go bungee jumping and your dopamine levels will hit the ceiling...and you might just bond or find yourself attracted to the person who share that experience with. What's going to happen when people trapped in an intimate space for a month have their dopamine punched sky high? And will anything they feel be real or just a side effect of the drug? Is there a difference?

Playwright Lucy Prebble (of Enron) assembles the elements of an intriguing thought experiment. And for about half the evening, a strong cast led by director David Cromer and a crack technical team produce very promising results.

In a wonderful touch, both Connie and Tristan take a psychological exam at the same time on stage: they stare at words on a screen, for example "baby" written in the color blue or "father" written in the color red. Apparently, the more meaningful the word, the longer it will take you to identify the color it's written in. Prebble elicits laughs and insights into both test subjects (and how they differ from each other) in one fell swoop. It also happens to be perfectly rooted in what they're going through, a textbook case of developing story and character at the same time.

Unsurprisingly, Connie and Tristan are falling for each other. But their emotions are overshadowed by the every-increasing levels of experimental drugs they're being given. Opposites attract as they so often do. But why? And will it last after the drugs have worn off? Is it any different than being more relaxed at a bar by having a beer or two before chatting someone up? This juxtaposition of chemistry and...chemistry is very well done. Add in a backstory for Dr. James that includes depression and her own complicated take on whether drugs mask or reveal the "real" you and you've got an excellent set up for a smart funny well-written play that offers a new way to think about romance, along with food for thought about science, the over-medication of society and more. 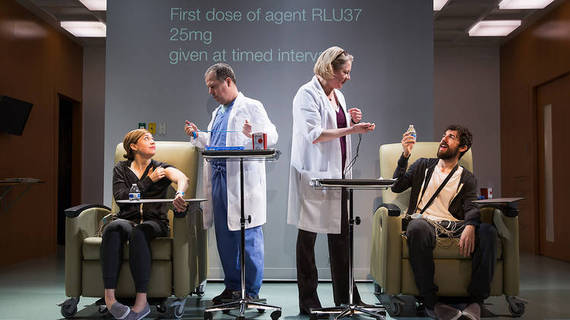 Unfortunately, the experiment goes awry shortly before intermission. Up to a scene where Connie and Tristan escape from their confines for a brief, naughty trip away from the ever-watchful Dr. James, The Effect has been subtle and smart. But soon the temptation of experimenting even further proves too strong. Prebble messes with the formula she's established and adds new variables. Instead of just one twist to the usual rom-com plot so we can measure its effect, she suddenly adds two and four and then seven more plot twists of an ever more dramatic nature.

The play goes horribly awry but since she's added so many variables to the story, it becomes impossible to tell which twist proved fatal. Is it the absurdly melodramatic finale which involves drama worthy of a telenovela? Is it the increasingly complicated backstory of Dr. James which impacts the plot in at least two significant and yet uninteresting ways?

My money is on the simple but crucial plot device of having Dr. James believe she knows which patients are receiving the test drug and which are receiving a placebo. This simply wouldn't happen since double-blind testing (in which no one involved in the study would know such a crucial fact) is essential to any good drug trial. Does it matter? Absolutely. Dr. James would never expect to know and thus the "betrayal" she feels in finding out she doesn't know is meaningless.

Worse, one thing we know about Dr. James for certain is that she's ethically rigorous and unwilling to bend the rules for a positive outcome. So when she betrays the knowledge about who is on a placebo it makes no sense for this character anyway. The ripple effects of Prebble's wrong-headed choice go on and on. Dr. James behaves contrary to everything we know about her, as does her superior Dr. Sealey (Steve Key). But the real error was in choosing to pump up a strong premise with the steroids of Plot when the play was already working like a charm.

Still, with Cromer (Our Town, Tribes) directing it's no surprise the production is impeccable. Flood and Hudson have a believable spark while playing that old saw, the incompatible couple that is (perhaps) meant to be. Brazda is similarly strong as Dr. James, giving gravitas and a nice zing to this authority figure, though none of them can rescue the histrionics at the end. Key is also good, though his role is simply less interesting than the other three.

So what did we learn from this experiment? Cromer is a terrific director and if his name is attached, the show is sure to be worth any serious theater-goer's time. If we weren't already fans of Flood, Hudson and Brazda, we are now. And Prebble remains a playwright of substance. Undoubtedly, she'll draw the correct insights and her next experiment with drama will achieve the desired effect.