Every current composer of musicals worth his salt gets compared to Stephen Sondheim sooner or later. The talented Michael John LaChiusa earns the comparison more than most for one unfortunate reason: like Sondheim, many of his musicals get staged, earn acclaim and then slip away too soon. Again and again, we see Sondheim shows "rediscovered" upon revival, becoming the hits and and gaining a place in the repertory they always deserved. Sondheim's shows aren't "difficult;" we're just slow to catch up with them.

The same holds for LaChiusa. Hello Again is a lovely song cycle that looks wiser every time we return to it. The Wild Party is going to be revived on Broadway any day now and prove -- a la Kander & Ebb's best work -- to be a smash hit not despite but because of its wicked dark wit. (Frankly, it should have been a hit the first time around.) Maybe it falls between the cracks, but Marie Christine would thrive if it could only become part of the canon for opera houses. (Not even Audra McDonald could tackle it for eight performances a week.)

And I remain astonished that the brilliant Giant -- an adaptation of the sprawling Edna Ferber novel (which is far more interesting than the stolid film starring Rock Hudson) -- hasn't even gone to Broadway yet. (Is it really possible a show with Bobby Steggert and Kate Baldwin and Brian D'arcy James and that ravishing score couldn't even get backing?) Surely it's only a matter of time.

So here we are with First Daughter Suite, a companion piece to LaChiusa's 1993 breakthrough First Lady Suite. It's intelligent, complex, beautifully sung and like a fool, I'm going to need some time to catch up with it.

It's composed of four discrete sections. Certainly they play off one another but each stands alone, just like the four sections of First Lady Suite. The first takes place on the wedding day of Tricia Nixon at the White House, a three ring circus bedeviled by the threat of rain and the imminent release of the Pentagon Papers. The second -- and best -- revolves around a dream of Amy Carter about rescuing the Iranian hostages so she can stay in her home and not return to Georgia. The third features Nancy Reagan asking the rebellious Patti Davis to join them at the ranch for Thanksgiving. And the finale shows the great Mary Testa offering a steely yet sympathetic look at Barbara Bush as she's corralled into campaigning to keep her son in the White House for a second term. With the talent on display and the track record of LaChiusa, First Daughter Suite is clearly a show any musical theater lover will want to see. 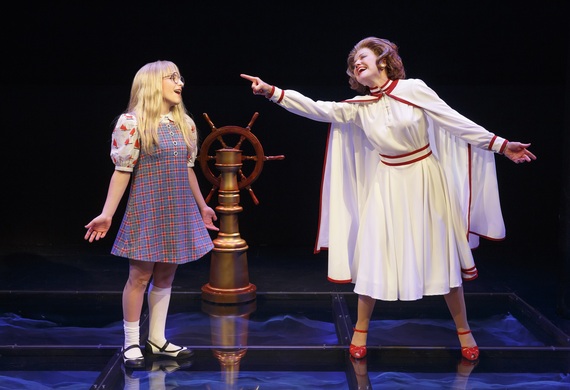 But first, let's dismiss the title. This is really First Lady And Daughter Suite and thinking of it that way will lessen any confusion among theater goers when one section or another is more about the parent than the child. Indeed, in the final piece the child died many years ago and is merely a source of grieving memory. It seems a minor point, but a misleading title or plot summary can lead audiences to spend quite a while wondering when the focus will shift or hesitate before mentally readjusting their expectations. A simple tweak in that title and that problem dissolves.

Nonetheless, at first blush it must be admitted that only the Amy Carter section felt a complete success. Every piece featured strong performances, but only the wacky antics on display in "Amy Carter's Fabulous Dream Adventure" proved what dizzying heights LaChiusa's concept could reach: it toyed with our understanding of these very public figures, exaggerated that profile for humorous effect and then revealed the very real people underneath with emotional acuity. All while making us laugh.

Amy (a terrific Carly Tamer, complete with glasses and wig for the full Amy effect) is having a dream. She's on the Presidential yacht cause yachts are cool. Her mom Rosalynn (a strong Rachel Bay Jones) is there because you can't avoid your mom, even if she's a little boring. Also there is the hard-drinking Betty Ford (Alison Fraser, letting it all hang out to good effect) because she's fun. And finally there's Susan Ford (the very good Betsy Morgan) because according to Amy, Susan is the coolest First Daughter ever! Susan cooks up the plan to get disguises and go free the hostages in Iran and Amy eagerly agrees, despite her mother's protestations. This is satire and dream-like logic to reveal a 12 year old girl's perfectly understandable desire not to be mocked by the media or have to leave her home because her dad might get fired from his job. Director Kirsten Sanderson and choreographer Chase Brock have a ball with these goings-on, the cast is excellent and all the tech elements come together beautifully. It's silly, funny and unquestionably the piece that people will remember best.

"Happy Pat" is strong too, but it suffers from being the first piece and the one that we have to work through before realizing that First Daughter Suite may not exactly focus on the First Daughters. Yes, Tricia (an amusing Betsy Morgan) is getting married and she and Julie (a wry and effective Caissie Levy) are quietly feuding while the rain comes then goes then comes again. But this piece is really about Pat (a nuanced Barbara Walsh). She's haunted by the ghost of Richard Nixon's stern, Quaker mother Hannah (a good, rounded turn by Theresa McCarthy) who blames Pat for not reining in his wayward soul. The two strands never quite coalesce -- at least on a first viewing -- since the struggle between Pat and Hannah doesn't seem to mirror in any way the travails of this wedding day or Pat's need to be decisive in this family crisis. Still, it's a fairly satisfying addition to the First Lady/Daughter body of work.

Not so for "Patti By The Pool," the one out and out disappointment of the evening. Nancy Reagan (Alison Fraser again) is sunning by the pool at the home of Betsy Blooomingdale in California in full "Nancy Reagan red," as her daughter Patti scornfully puts it. (Levy again, sporting the night's wittiest ensemble, which is funny yet almost tips the proceedings into sketch comedy territory, though for all I know costume designer Toni-Leslie James based it on photos of the time. In which case I must blame Patti.) By all accounts, the Reagans were not terribly interested in their children and that's the impression nailed down here. Nancy wants something from Patti, they dance around the topic and we get both the steely truth and a nutty, satirical spin on the truth that is an unconvincing flight of fancy. Since we're not in dream territory like the Amy Carter section, it falls flat. As a result, Fraser in particular feels unmoored: her Nancy Reagan doesn't feel like a real Nancy Reagan nor any liberal's worst nightmare exaggeration of what Nancy might have been. It feels like something else entirely, though nothing very interesting. Blame the material, not Nancy (and certainly not Patti, who got enough blame at the time.)

Finally, there's "In The Deep Bosom Of The Ocean Buried." This takes place on October 11, 2005, the anniversary of the day Barbara Bush's first daughter Robin died of leukemia just shy of her fourth birthday. Barbara is in Kennebunkport, staring at the ocean while remembering her child and imperiously deciding whether to give in and do as asked: campaign for the reelection of her son George, who she sees as damaging the legacy of the 12 years she and her husband served the country. Laura Bush (Jones, no pushover here) hovers nearby, urging Barbara to come inside and pack and get out of the cold. 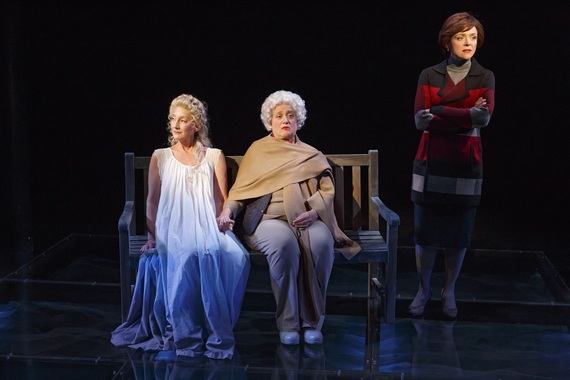 Dramatically, this final piece is at first blush a little static. Not much happens plot-wise or emotionally to the characters. The audience may well learn about Barbara but the characters don't gain any self-awareness or new understanding about themselves or each other. Barbara is the Granite Granny, a nickname she takes cool delight in. A stern figure that brooks no nonsense and certainly wants no sympathy is exactly what she seems at the beginning and exactly what she remains at the end. LaChiusa does pull off a neat trick here: those unaware of the sad loss she suffered will surely find themselves empathizing with Barbara. At the same time, hearing of how they dealt with this blow (they told no one at first, son George was ordered not to cry and they left for unavoidable business while others handled the actual burial) will surely give one pause as to what complicated, odd, tamped down people they must be to handle grief in this way. (One doesn't become President by being normal, you know.)

As with his lovely Queen Of The Mist, LaChiusa is blessed to have Testa as his muse here. Effortlessly funny when she wants to be, the mere sight of her garbed as Barbara (excellent work by Robert-Charles Vallance, as throughout) sent some theatergoers into giggles. But while there's humor here, it comes from Barbara, not at her expense. Testa brings this character fully to life in all her complexity, turning what might have been a modest finale into a more compelling, intriguing one.

The musical strengths of each section will need time with a hoped-for cast album to come. I think the finale may contain some of LaChiusa's best work here, with the "Amy Carter" a close, fun second. Hopefully, he's not done yet. I for one was expecting and hoping to see Alice Roosevelt Longworth on display as the world famous First Daughter or late in life political kingmaker she was. And if he's willing to go even further into the past, both the pithy letters of Abigail Adams and the tormented spirit of Mary Todd Lincoln beg for music. Despite my cavils, in short, I'd like to hear more.