Actor Bobby Steggert just turned 35 this month and what a gift to himself: to be performing in a new play as good and bold and moving as Boy. It's hard to imagine another actor soon equalling the nuanced, open-hearted, deeply empathetic work of Steggert. But they'll surely be trying -- Boy has both the white-hot issue of gender identity and the simple fact that it's very, very good in its favor. So they'll be performing it for years to come.

Based on a true story, this play by Anna Ziegler shares the wrenching experience of Adam Turner (Steggert). Born a boy in 1968, Adam suffers a tragic accident during his circumcision that literally mangles his penis beyond repair. Desperate, Adam's confused parents turn to Dr. Barnes (Paul Niebanck), a famous scientist just profiled on 60 Minutes, asking for advice.

Dr. Barnes happens to believe that people are blank slates, that our gender identity is formed almost entirely by "nurture," by the environment and the expectations we are raised in. He counsels the parents to raise this child as a girl, ultimately encouraging surgery that would give Adam a vagina and thus make him "complete" as a female. It is precisely what Dr. Barnes believes would be best for Adam. And it also just happens to provide the ideal opportunity to see a test case of his theory put into action.

What follows are years of confusion and misery and pain. Adam's parents dutifully call him Samantha, raise him as a girl and give him hormones to encourage breasts. Needless to say, Adam is forever out of sorts and deeply depressed...though always eager to please Dr, Barnes, the one person who seems to accept him completely. He thinks his mom (Heidi Armbruster) hates him and his dad (Ted Köch) simply can't bear to be around him. He feels a complete disconnection between his gender identity (male) and the gender of female that his family and the world insist he embrace. At some point, he must be told the truth and then Adam will have the cold comfort of finally understanding his inner turmoil. Then he'll have to try and understand the actions of everyone around him. 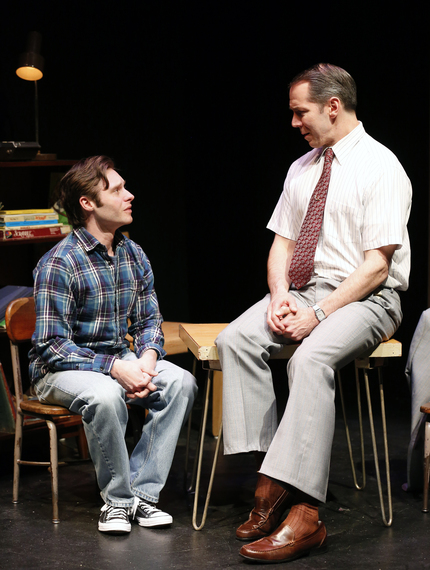 My guest for this play read a book about the case that inspired the show and says that Ziegler did a very good job of distilling the essence of Adam's journey. All I know is that Boy was billed as 90 minutes long. Yet it was so intense and absorbing I figured that estimate was off a bit. It felt more like 100 minutes or even longer, in a good way. In fact, it was even shorter than advertised, but so compelling you'd never have known. Good shows can do that.

Before you imagine an issue-heavy, movie of the week drama, rest assured this is focused strictly on the characters at hand. You won't find any villains here. And Adam is allowed to be complex and real: he's socially awkward and angry and still finding his way. That empathy for everyone -- from the awkward love of the parents to the misguided advocacy of Dr. Barnes to the confused affection of his would-be girlfriend -- is what makes Boy so good.

It has a quietly complex structure. We begin in 1989 where Adam is at a Halloween party and chatting up Jenny (Rebecca Rittenhouse). They went to grade school together but back then he was known as Samantha so naturally she doesn't recognize him. Adam's an odd duck, constantly correcting her pop culture references, expounding at length on the technical merits of her car and ignoring her obvious desire to fool around.

We immediately cut back to 1973 when Adam was in the first grade and called Samantha. Soon the mystery of Adam's story becomes clear, thanks to numerous sessions with the always patient and well-intentioned Dr. Barnes. The boy tries so hard to please this authority figure, to do what's expected of him. But he instinctively hates his bra and the hormones and he absolutely refuses (even at age eleven) to have surgery giving him a vagina.

This slow motion car wreck of a childhood is interspersed with the adult Adam's clunky wooing of Jenny. He seems so stalker-y at first, it's a little hard to understand what she sees in him. He shows up unexpectedly at her work and offers to drive her son to school some days, even though they really don't know each other yet. But as the single mom of a little boy, Jenny clearly doesn't have a lot of options and she senses deep down the sweet and kind nature of Adam. Though clearly something is up. It will take a disastrous date to meet his parents and numerous failed attempts at intimacy before she can pry the truth out of him, but pry it out she will. 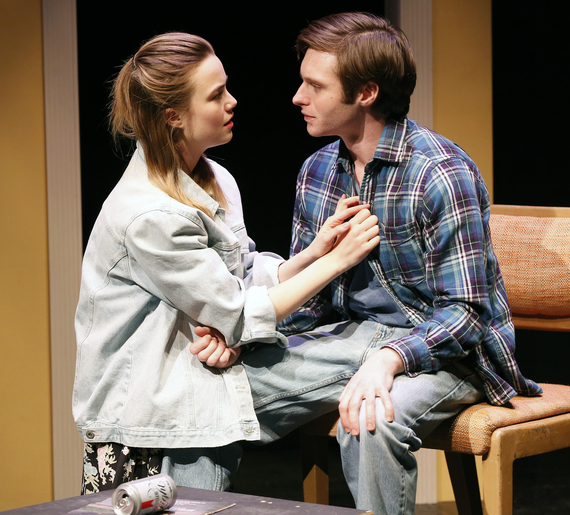 The quiet suspense of Boy is remarkable. We see Adam as the unwitting experiment of Dr. Barnes, wondering how far the trauma of his life will damage his ability to have any wholeness at all. We wait for the moment he'll be told the truth and wonder how Adam will react. We wait for the moment he'll tell the truth and wonder how Jenny will react. It's never as simple as pointing the finger of blame at Dr. Barnes or finding out whether Adam and Jenny will have a life together. It's the drama of seeing people get to know themselves and each other.

Ziegler's intelligent script lays out this complex story with precision and grace. From the very start, the ideas of the show are allowed to breathe: Jenny mentions how she's become stuck with the nickname of "Jen" and Adam tells her she can "un-stick it." But it's not that easy to forge your identity, is it?

The technical team matches her writing every step of the way. The scenic design by Sandra Goldmark rather brilliantly embodies the ideas of the play. We see a small desk with two chairs on stage right, a couch in the middle and other modest furniture on stage left. All of it is "mirrored" on the walls, with a slightly different couch suspended on the back wall just off center from where it is on stage. The same is done for the entrances, as well as the small desk and chairs (seen on the opposite wall) and other items. None of the "mirror pieces" on the wall are exactly alike to their stage counterparts. But it's all vaguely similar -- like a blurry xeroxed copy -- capturing the duality that beats at the heart of this story in one fell swoop. It's a master stroke. The costumes (Sydney Maresca), lighting (Nick Francone) and appropriately invisible sound design and low-key music of Shane Rettig all work in concert to great effect.

Director Linsay Firman (who helped launch playwright Lucas Hnath with her excellent directing of Isaac's Eye) has drawn excellent performances from one and all. Rittenhouse is warily endeared by Adam to heart-breaking effect when her roiling emotions finally come out, wondering why he won't make love to her. Armbruster and Köch walk a fine line as Adam's parents, clumsily making so many mistakes but always leading with their hearts. Niebanck is key to the show working since a lesser actor might allow us to hate or blame Dr. Barnes unconditionally for seeming to place his theory ahead of the human being in front of him. Yet his genuine concern for Adam comes out in trembling, touching fashion again and again, even if he's willfully blind to the damage done.

Above all there's Bobby Steggert, who shines in everything he does. Rightly nominated for a Tony when he starred in the revival of Ragtime, Steggert has always been good to great on Broadway, often in shows that didn't quite work, shows like the musical Big Fish and the Terrence McNally drama Mothers & Sons, an "issue play" of sorts that was limited in a way Boy is not. He's also been acclaimed in 110 In the Shade and Master Harold...and the Boys.

But the shows that didn't make it to Broadway have been so much better. Yank! should have made the leap -- it's one of the best musicals in recent years and Steggert was its heart and soul. (Happily, it enjoyed a good run Off Broadway and they made a recording of the score). The musical Giant was a triumph that also deserved -- indeed, demanded -- the big sweep of the Great White Way. It's heartbreaking that project has yet to find a new life. A Minister's Wife, The Slug Bearers of Kayrol Island -- one could go on and on about the terrific works that have benefitted from his talents.

Here however is a show that demands to be seen in a small, intimate space. So don't wait a minute to catch it. Steggert wears mostly jeans and a black t-shirt throughout. With the smallest change in his posture and voice, he captures the willful smarts of a little boy who bridles under the demand he be a "good little girl." Then he's an angry adult lashing out at his parents or a teenager finding out the truth of his life or a young man wooing his first sweet-heart or back to the child that is so, so eager to please Dr. Barnes that he'll do almost anything but speak the truth: his life is going terribly wrong and he doesn't know why. It's a performance of aching simplicity and truthfulness, never showy, never grand-standing, never anything but honest to the almost unimaginable journey of a boy raised as a girl who is finally embracing his authentic self. 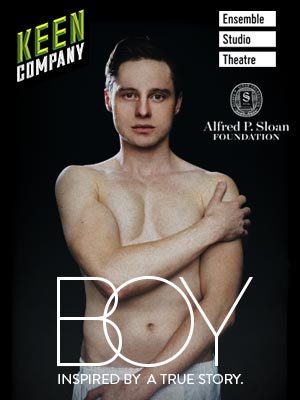