Dying is easy; comedy is hard. Playwright and actor Charles Busch obviously never paid attention to that dictum since he makes comedy seem easy, turning out amusing one-liners and vivid characters year after year. Any show of his is always good for a chuckle, thanks to Busch's wit and spirited actors committed to his crazy, cinematically obsessed vision of the world. But when you're lucky enough to see Busch at his absolute best -- like the recent, brilliant comedy The Divine Sister -- merely good Busch is not good enough. (There's a joke in there which Busch would land with ease, but you get the drift.)

The Tribute Artist is not good enough. It has a set-up you can see from miles away, which is surely a good sign. Busch plays Jimmy, a "tribute artist" (his defensive term for drag) dumped from a Las Vegas revue who is back in New York and renting a room in the Greenwich Village townhouse of the fabulously wealthy and fabulously acidic Adrianna. In five minutes, we learn that Jimmy does a "great" Adrianna; that his best friend is Rita (Julie Halston) is a spectacularly unsuccessful real estate agent; that Adrianna has no friends or relatives and hasn't been outside in literally months and months with none the wiser. No one to claim her multi-million dollar home? No one who would know or care what Adriana looks like? Hmmm.

Before the larcenous idea even lights up our brain, Adriana is dead, Rita is bringing in potential customers to sell the home and Jimmy is having a ball as a wealthy grande dame with an impressive memory for old movies. Needless to say, complications ensue, namely the arrival of a distant relative Christina (Mary Bacon) who is the real heir to this townhouse when Adriana dies and is furious to find out the woman she met and hated when just a little girl is trying to cheat her once again. In tow is Christina's transitioning child Rachel-now-Oliver (Keira Keeley) and an old flame of Adriana named Rodney (Jonathan Walker) who also hasn't seen her in decades but since gets his hands on the incriminating evidence (Jimmy can't help flirting). 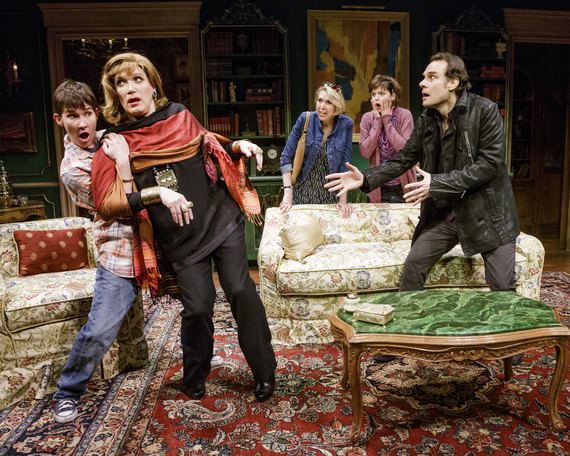 It's silly, genial fun directed briskly by Carl Andress on a wonderfully detailed set by Anna Louizos that makes you want to move in (and redecorate) pronto. All the tech elements are solid, from the wigs of Katherine Carr to the costumes by Gregory Gale. But they can't disguise the fact that The Tribute Artist is spinning its wheels.

We soon realize that the story is going nowhere. Once the various characters are introduced, they simply hang around and get to know one another. There's no sense of escalating tension or the stakes being raised, something crucial for a comedy like this to take fire. Quite simply, the script needed to scroll through the ole Underwood a good three or four more times.

Rodney is clearly a cad from the start, when he's immediately asking the faux Adriana where she keeps her stash of jewelry. Christina is brassy but harmless and just needs love. Oliver is already out and championed as much as possible by his understanding mom. And so on. The worst that happens is they get to know each other... and like each other. The fact that Rodney is always trafficking in cadavers and other body parts is a harmless distraction. Worse, various potential complications are squandered, like the various love triangles that are raised as possibilities and soon dropped, from the Adriana/Jimmy and Rodney and Christina triangle to the Rita and Christina and Rodney triangle.

What if Rodney had been truly threatening or actually stolen away someone's heart? What if Oliver had come out as transgender during the show to ratchet up the pressure on mom Christina? What if Christina had proven truly flexible in her desires rather than just paying it lip service? We're told that Jimmy has transformed from a great impersonation of Adriana into a fire-breathing, old movie-quoting drag queen but in fact that development is never shown: Busch is pretty much himself from start to finish. Seeing him become more convincing as he simply embraced his own personality more and more might have been an entertaining comment on what's "real" versus what's "fake" in drag and art and life but we don't get within a mile of such thoughts here.

Busch has a funny late scene where he can't stop himself from quoting old movies at every turn (with Rita nailing him for it) but it's the sort of thing he could do in his sleep. Despite not tackling the journey his character claims to have traveled, Busch is always funny of course. Stalwart Busch veterans like Halston and Walker do their best and Bacon is dependably funny. But Keira Keeley is most memorable as Oliver, an easily caricatured part she makes fit into the Busch world without making it become a joke.

Except for Rodney, these are all nice people who get along despite themselves and have a grand time doing so. Jimmy isn't a scam artist so much as an Auntie Mame figure for both Oliver and his mom. Rita isn't a sad sack; just loyal to Jimmy. And so on. So, the stakes are too low here. (Dramatically, of course; a NYC townhouse is well worth murder and mayhem.) As a tribute to an artist like Busch, we simply expect more from him.

Thanks for reading. Michael Giltz is the founder and CEO of BookFilter, a book lover's best friend. It's a website that lets you browse for books online the way you do in a physical bookstore, provides comprehensive info on new releases every week in every category and offers passionate personal recommendations every step of the way. It's like a fall book preview or holiday gift guide -- but every week in every category. He's also the cohost of Showbiz Sandbox, a weekly pop culture podcast that reveals the industry take on entertainment news of the day and features top journalists and opinion makers as guests. It's available for free on iTunes. Visit Michael Giltz at his website and his daily blog. Download his podcast of celebrity interviews and his radio show, also called Popsurfing and also available for free on iTunes. Link to him on Netflix and gain access to thousands of ratings and reviews.