The opening scene of Molly Smith Metzler's comedic play Close Up Space is the only good scene. But in fairness it does briskly and efficiently introduce our main character, his perspective on the world and his troubles in this new production by Manhattan Theatre Club.

The marvelous actor David Hyde Pierce is Paul, an editor at a boutique publishing house and he's lecturing us on editing by using plaintive emails from various heads of boarding schools as samples to dissect. Pierce deftly reduces these desperate pleas to come pick up his rebellious daughter (who is wandering campus naked and pulling off this or that unfortunate shenanigan) by red-lining them and eliminating the redundancies, poor grammar and rambling tone. It's funny, tight and delivers a lot of information.

From this opening, we learn Paul is an old school publishing editor (though in the slow-to-adapt world of publishing, his use of an overhead projector might seem daringly modern). He's precise and dedicated to his work. He doesn't suffer fools gladly. And his daughter is either troubled or a free spirit but definitely a handful.

Even this scene misses a joke. When the new intern he's lecturing tries to talk about the software she can use, Pierce says it certainly didn't help her write a coherent cover letter and shows the editing it needed, a nice visual gag. We immediately wonder why she got the job (out of 140 applicants)? If she'd asked, Pierce might have whipped out letters even more heavily red-lined or perhaps a pile of shredded documents and said, "This was the competition." It hardly matters, given the confused nature of everything that follows.

The intern Bailey (Jessica DiGiovanni) makes no sense on any level. She can't speak intelligently, immediately starts pining for the chips and soda available at some other publishing house and blathers on to the house's top writer during a meeting when she was told to remain quiet. (Bailey compliments the writer on her choice of font, when Bailey was just told the writer uses an antique typewriter, leading us to believe Bailey is a complete idiot.) Ultimately her character is so superfluous that at one point she is simply sent home for the day and never heard from again.

Even more tiresome is the "wacky" receptionist Steve (Michael Chernus) who is literally camping out in the office because his dog has shown affection for Steve's roommate. This goof somebody's relative or friend; he needs a job and is somehow forced on Paul. Steve makes nutty jokes and isn't remotely believable on any level but at least he's an identifiable cliche (the oddball life-force). Rosie Perez brings her considerable charms and distinctive voice to Vanessa Finn Adams, a high maintenance best-selling author. She's both terribly demanding and a sweetheart who has a thing for Paul. Adams is both street savvy and high falutin', sassy and Shakespeare-quotin' at the same time.

But not even she can challenge Paul's teenage daughter for sheer unlikeliness. Harper (Colby Minifie) is an 18 year old teen who shouts out Russian at the top of her voice for endless stretches of the show because her mother committed suicide, Paul sent her away to boarding school and she feels exiled. Hence the Russian, which she speaks so fluently that Harper translates poems into English during her spare time. It's an idea so heavy-handed and a conceit so labored in its whimsy that Wes Anderson would avoid it.

This child terrorizes Paul, brings in a crack team of anarchists to strip his office completely of every item and refuses to speak English for far longer than you would imagine. Oddly, Minifie is far more passionate and believable when shouting out Russian. When she (finally) speaks in English, Minifie adapts an exceptionally deliberate, odd cadence; perhaps she's trying to make sense of the story.

The even odder touch is that the fine office set by Todd Rosenthal slides off stage after Harper had the room stripped by her unseen associates. But it remains in the wings, a lurking presence. One assumes it will slide back into place at some point -- else why have it there in plain sight? But in fact it too has been banished and without even the decency of a divider or wall or even a curtain to shield the now abandoned set from our view. We literally stare at it just out of the actors' reach for the rest of the play, a scenic choice one struggles to understand.

I wouldn't judge anyone's acting in a play like this so I'll pass over most of the cast in silence. Rosie Perez and David Hyde Pierce have a fun chemistry at moments; they're an unlikely couple it's fun to see together, however brief and confused their scenes may be. Pierce actually holds the show together in a way with his considerable skill, though by the end he is jumping around to try and shake some life into this mess. Even the finale is misjudged, wasting a modest visual flourish by slamming home the obvious fact that Paul and Harper will come closer together. 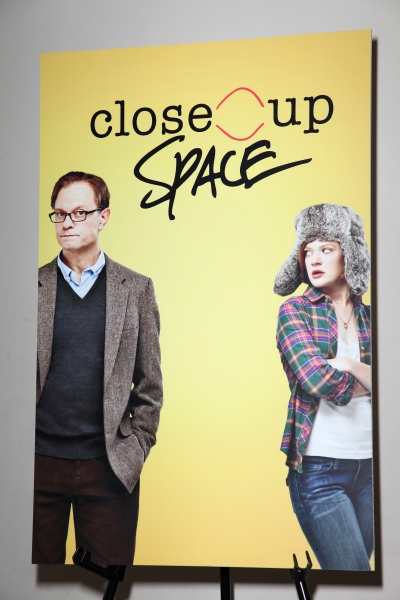 Note: Michael Giltz was provided with free tickets to this show with the understanding that he would be writing a review.