A BRONX TALE: THE MUSICAL ** out of ****
PAPER MILL PLAYHOUSE

Well, why not? A Bronx Tale began as a one-man show that launched the career of actor Chazz Palminteri. It was one of those rare cases where friends probably told him time and time again he should turn the stories of his youth into a show, he did, and it actually worked! That in turn became a movie marking the directorial debut of Robert De Niro. Like Sylvester Stallone, Palminteri wisely sold the rights on the condition he be cast in it, in this case the magnetic supporting role of the mobster Sonny. And now De Niro has co-directed with Jerry Zaks yet another incarnation of this coming-of-age tale. This time, it's a musical.

Unfortunately, by and large they forgot the songs, not to mention any distinctive choreography or movement. As one would expect, De Niro and Zaks have done a good job of bringing out solid performances from the cast. Certainly the book (penned by Palminteri) isn't the problem. This story of a young kid becoming enamored of the tough guy who lords if over their street and rebelling by calling his hard-working dad a sucker is familiar territory...and not just because we've seen it on film and stage. But too many squandered opportunities keep A Bronx Tale: The Musical" from taking flight as a musical.

It starts with a couple of guys singing doo-wop under a streetlamp as the grown-up young man Calogero (Jason Gotay) launches the show with "Belmont Avenue." The show sets up the doo-wop singers as a potential Greek chorus (and who doesn't love good doo-wop) but that idea is mostly squandered. (The guys become friends of Calogero and sometimes break out the doo-wop but it's not really a consistent thread.) Further, Gotay is at his most appealing vocally thanks to a melody that sits comfortably in his upper register. Unfortunately, most of his other numbers have melodies that sit much lower on the scale and fail to show off Gotay to his best advantage. Since an upper register also suggests the innocence of youth here, that's a shame for several reasons.

This launches into the words of advice from the bus-driving dad of Calogero to his pre-teen son (Joshua Colley). Unfortunately, it's called "Look To Your Heart," sentimental clap-trap that pushes against the increasingly grim world that the story depicts. In fact, "look to your heart" becomes the show's mantra and oft-repeated refrain, a Hallmark style slogan that lands flat. Worse, Calogero's dad (Richard H. Blake) is a frustrated sax player, though a love for soul or jazz or big band never comes into things, another missed opportunity to be specific and give characters some link to the music they're singing. The lyrics by Glenn Slater and music by Alan Menken rarely get better.

Yet for a moment they do. Topping the modestly pleasing opener is "I Like It." The young Calogero has sung a few earlier bits, but as with the adult actor, the melodies he's given don't suit his voice. But suddenly Colley is given a song that expresses the giddy pleasure this kid finds in receiving the attention of the mobbed-up Sonny (Nick Cordero). Once everyone knows he's a favorite of the feared gangster, Calogero gets free soda, free comic books, friendly smiles from one and all and cash in his pocket. No wonder he likes it! This number is a genuine winner, pushing the story forward and letting Colley shine with a melody and lyrics he nails gleefully, receiving by far the biggest applause of the night. It's all downhill from there.

The young Calogero is replaced by the teenage version (Gotay) and the songs and story quickly become generic. He fights with his dad, he works for Sonny and yes he loses his way. We suddenly discover there are black people in New York City, (before, his world was strictly Italian-American) and in about two minutes we get rising racial tension and Calogero falling for a sweet, friendly black girl named Jane (Coco Jones) in his high school.

It's too much too fast, though Jones manages to be winning even in a truncated part and with about half a song she gets to sing. Jones works at a record store, but any thought that the show might use that for musical inspiration is also lost; she might as well work in a library.

Only Sonny's song of how to survive on the streets dubbed "Nicky Machiavelli" has any personality to come close to matching "I Like It," thanks in no small measure to Cordero's turn. But that's also in Act One, leaving Act Two devoid of any memorable songs. Cordero's magnetism and genuine presence give this show much needed gravitas. Gotay is a capable and amiable lead, but the songs and story feel so anonymous he never really comes alive. Frankly, events mostly seem to swirl around Calogero, so it's hard to make this passive role feel vibrant.

The choreography is by Sergio Trujillo but this show never really feels like one that moves. The scenic design by Beowulf Boritt runs out of steam; eventually large walls simply block off parts of the stage to create more intimate moments, a tactic that feels intrusive and unimaginative. Paper MIll often boasts an excellent orchestra. But here it's smaller than usual (perhaps to go for a more rock and roll vibe?) and the arrangements by Ron Melrose include a lot of very mechanical drumming that makes it feel tinnier than usual.

Palminteri's heartfelt ode to his childhood and tribute to his dad has an innate appeal. A Bronx Tale proves Tony nominee Cordero has the chops to succeed in drama as easily as he has in comedy. And it offers a showcase number for Colley that any kid would kill for. But what surely was imagined as the next Jersey Boys is more likely to make you wish Palminteri would hold the music and just bring back the one-man show that made his name.

This is my first time seeing Sam Shepard's Buried Child. I can use my imagination to dimly guess at the wild, woolier production that helped garner this work the Pulitzer Prize in 1979 (a year after it debuted). Certain scenes I assume had a disconcerting power, constantly subverting expectations and spinning an apparent family drama into surreal territory. But onstage in the ideal space of Pershing Square Signature Theatre, imagination is mostly lacking in a revival by the New Group and directed by Scott Elliott that feels moored to the ground.

Happily, it stars Ed Harris as Dodge, the cantankerous, essentially couch-bound old bastard who is stewing in his own juices (and a quantity of alcohol) as the family home crumbles to pieces around him. Upstairs we hear the hectoring voice of his wife Halie (Amy Madigan, uncharacteristically uncertain in her part) and then in comes their grown-up and eldest son Tilden (Paul Sparks) clutching some ears of corn. Corn? What corn? They don't have any corn. Did he steal it from a neighbor? Whomever the corn belongs to, there it is. Tilden shucks it, bizarrely puts both the corn and the detritus in a bucket, then scatters the trash over his now sleeping father. When another son (the one-legged Bradley played by Rich Sommer) comes in brandishing a razor to aggressively shear his dad, you know something odd is going on.

That sense of dislocation is doubled when Vince (Nat Wolff) shows up with his girlfriend Shelly (Taissa Farmiga) and insists he's the grandson Dodge hasn't seen in six years. Dodge and everyone else insists they've never seen him before, until it suits their purpose to claim differently. Exactly who is nutty here? 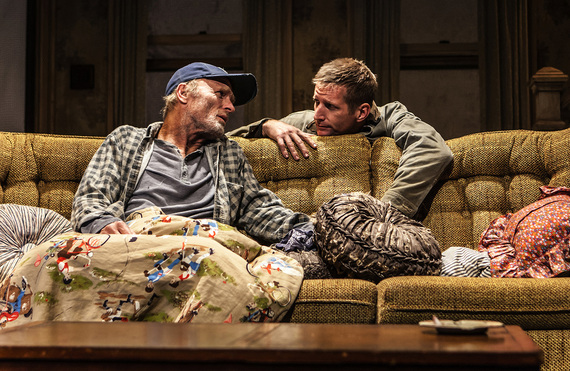 You never really care. Wolff and Farmiga are particularly adrift, with Wolff making little of his one memorable monologue and Farmiga lacking the vocal technique in her stage debut to do much of anything but deliver her lines in a flat, robotic style that hits one note and sticks to it. When Larry Pine wanders in later as a priest utterly befuddled by the goings-on and insisting he not be dragged into the middle of it, you understand completely.

Sommer has one effectively creepy moment with Farmiga, though it's immediately squandered. We should get a Pinter-esque sense of anarchy unnerving us, the realization that this is a world playing by rules we don't understand. But the moment is almost erased, with no sense it ever happened or anything similar might happen again. It's the difference between a production that keeps you off-kilter and one that simply presents one bit of lunacy after another with no conviction that any of it matters.

The miracle is that throughout it all, Harris is magnetic. He's surrounded by some actors who can be very good but most everyone else is off their game. Not Harris. For Dodge, the frustration and confusion and horror and humor of it all is piercingly real. Harris barely moves but you can't take your eyes off of him. I'd much rather see him in a good production, of course, but there's something amazing about talent that can flourish even under the most adverse circumstances. I'll need to wait for another production to get a better sense of the potential of Buried Child. But for Harris, no further proof is needed.