Two solo shows offer a chance to see the legendary John Hurt and the rising star Cillian Murphy use all their talents to populate a stage with emotion and in Murphy's case a wide cast of characters. Though neither experience is ideal, the actors make them essential viewing.

Theater is so nebulous and fragile, it's no revelation to say that going to the same production on different nights can give you a very different experience. Even being seated in a different part of the theater can change the show you experience. At $25, it's a bargain to see actor John Hurt in action even if you're in the last row of the balcony. But if you do get a chance to see Krapp's Last Tape, surely the closer you are the better and richer your experience will be.

I saw Hurt perform this Beckett monologue in London some years ago, when I was one row from the stage and mesmerized by his haggard, beaten-down face and the emotions that flitted across it. Seeing it again at BAM just nine rows away, the show was very different indeed. This time, my focus was more on the humor and the voice of the younger Krapp captured on those spools of audio. (I think Hurt even toyed with the way he said, "Spool;" something every actor must do to keep the story fresh. The Harvey Theatre has a wonderfully run-down aura, but it's probably too big and expansive for this very intimate piece. But Hurt is too talented to make the night a disappointment. This performance may not have worked its way into my bones the way the last one did, but it was funny and sharp.

The lights dim and then slowly rise. Hurt seems to literally materialize in front of us, sitting at a wooden desk on a spare stage in a pool of light. (The show is directed invisibly by Michael Colgan and lighted nicely by James McConnell.) Beckett toys with the obvious for a while. His character's name is Krapp and he has bowel troubles. Then a banana peel is tossed onto the floor before Krapp slips on it. The audience isn't quite sure whether it's supposed to laugh. That's after Krapp takes a whole banana and inserts it in his mouth -- with most of the banana hanging down -- and stares dolefully out at the crowd. This does cause titters. But then Hurt does it again. It's essentially the same goofy image -- Krapp standing there with a banana in his mouth -- but because of the repetition and the way Hurt embodies this role, the sight is suddenly not comic. It's terrifyingly sad and absurd the way life is absurd if you think about it for more than a moment. This surely is the essence of Beckett. 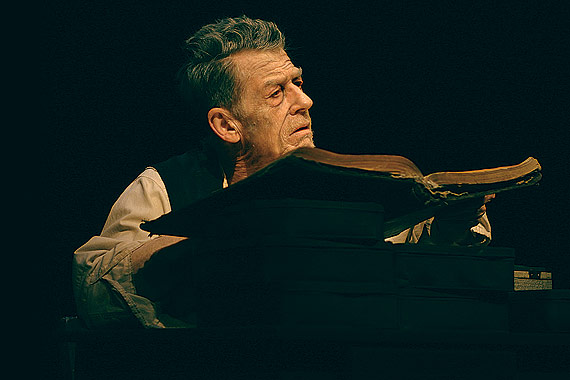 The grumpy, distracted Krapp is performing an annual ritual. Every birthday he records some thoughts and listens back on previous annual diaries. Invariably, he returns to his 39th birthday when Krapp had a brief moment of happiness -- or at least a glimpse of happiness -- with a girl in a boat on a river. The 69 year old Krapp is disgusted with the pretensions and glib pronouncements of the younger Krapp. But he's also devastated at how even the frustrated 39 year old version of himself still had some fanciful feelings alive inside him. The younger man was a fool, of course, but if only Krapp had the ability to be a fool again.

Staring out at the audience with an emotion to thin and weak to be called despair, Krapp is a frightening figure. Whether speaking out loud or listening to his younger self on audiotape, Krapp is desperately alone and knows it. The show only lasts 55 minutes but it's a rich and enjoyably exhausting 55 minutes, wherever you may be seated.

Misterman by Irish playwright Enda Walsh (enjoying a huge success with the musical Once) is a distant cousin to Krapp's Last Tape. In this show, the town idjiot Thomas Magill (Cillian Murphy) relives one fateful day in his life via the copious audio recordings he's made of the people around him.

Walking into St. Ann's Warehouse is always a treat because the open space seems to transform itself for every show. In this case, the audience is seated along bleachers of seats and a set rambles on from one end of the warehouse all the way down to the other, with a scaffolding and stairs providing access to a second level and various bits and pieces scattered about in the background. How in heaven's name will we keep track of going on and who exactly will have good seats in this expansive setting?

Everyone it turns out, for Murphy runs up and down the set and fills up the space wherever he may, whether on the second floor of a gymnasium, standing on a street corner or home having a cuppa with his mother.

Thomas is a sad figure and for a while he seems to be reliving and reenacting his daily routine, pausing at moments to redo a bit of dialogue or fumbling over his "cue." But eventually the story takes over and it seems we are witnessing the actual day in question, with the usage of audio recordings of other voices a fresh way of telling the tale.

Thomas is a bit of a nutter and unquestionably a prude who uses religion as a bulwark against his own feelings and as a bludgeon to make himself feel superior to others. He's always scribbling down comments about his neighbors. As Walsh has shown in The Walworth Farce and other shows, he is obsessed with storytelling and how we use it in our lives. But his shows really come to life when he moves beyond elaborate conceits or meta-trappings (like audio recordings in lieu of other actors) and lets his characters breathe.

Misterman comes to life when Thomas is cajoled into dancing by a waitress (even if she is a bit of a fun-time gal) or treated kindly by a mechanic who politely humors Thomas and his idea of them becoming missionaries. We can see he's the town eccentric but also that Thomas has a place in this world. Still, a loose cannon like this is an all-too familiar sight. When Thomas bludgeons to death a helpless dog at the halfway mark, it's all too easy to spot where the story is headed. Unfortunately, we are not surprised in the least.

But getting there is fun thanks to a sterling production that is top-notch on every level. Walsh directs Murphy clearly and the creative team he assembled is excellent. Designer Jamie Vartan, lighting designer Adam Silverman, composer Donnacha Dennehy and especially sound designer Gregory Clarke all do marvelous work. (Still, when Thomas is talking with his mum or other characters and their dialogue is on audiotape, I wonder why they let the ambient sound of the tape be cut off. Obviously, they want to allow Murphy to freedom to respond to the rhythm of that particular night's performance so the audio is paused, but surely they could allow the ambient sound of the audio to continue so this would be less obvious and let us believe more completely that the conversation is taking place? Since Murphy isn't literally turning an audio player on and off, that would seem to be the better choice.)

But above all, there's Murphy, who I've never seen on stage before. The actor -- so good in films like 28 Days Later, Girl With A Pearl Earring and The Wind That Shakes The Barley -- made his bones with Walsh and the breakthrough 1996 play Disco Pigs. He commands the stage with authority in a very tricky role. Murphy gives voice to numerous characters, interacts with audio tapes and balances between madness and despair with consummate ease. Misterman may be too familiar a tragedy to truly impress but Murphy and this talented team certainly present it as fully as possible, mining the story for all its worth.

Note: Michael Giltz was provided with free tickets to these shows with the understanding that he would be writing a review.