Nellie McKay celebrated her birthday by kicking off a stand at the New York City cabaret venue du jour 54 Below. She rocked the house -- surely it's the first time 54 Below shook to the sounds of Frank Zappa -- delivering a clutch of 1960s covers ranging from the classic to the obscure. It was protest music delivered with a sly smile and a sincere heart, exactly what McKay has been doing since she burst onto the scene in 2004 with her debut album Get Away From Me. If the evening never quite soared, it's because some of the songs she chose to perform were so challenging to sing but uninteresting melodically, an unfortunate combination. They were delivered with verve, but a vocal showcase it wasn't. 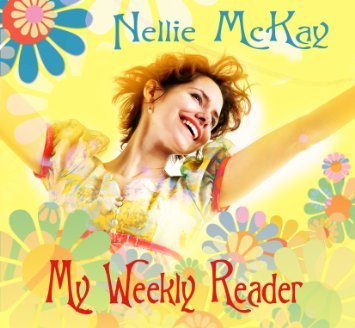 Ten of the tunes came from McKay's new album My Weekly Reader, which delights in reminding us of the Occupy vibe that dominated that era, though in the 1960s people still believed they could change the world. ("We can!" Nellie might chime in.) Co-produced with sonic sophistication by Geoff Emerick, one could just as easily focus on her whimsical covers of "Mrs. Brown You've Got A Lovely Daughter" by Herman's Hermits or the left-field rendition of the Paul Simon-penned curio "Red Rubber Ball." Still, the socially committed McKay clearly feels a deep affinity for protest via song, an almost lost art these days and that's where the heart of the album lies. I haven't lived with it long enough yet, but repeated listens have made this collection hang together more and more.

Unquestionably it has some tunes that may work well in the album context, but are a little flat musically for singers: "Murder In My Heart For The Judge" (by Moby Grape), "Hungry Freaks, Daddy" (the Zappa tune) and the bleak Richard and Mimi Farina tune "Bold Marauder" were all delivered capably in concert by McKay but proved better opportunities for her fine band to stretch out than for the performer herself to shine as an interpreter.

Happily, many other songs gave McKay a chance to deliver. The buoyant "Itchycoo Park" by Small Faces made clear the band-first vibe that would predominate could be fun. (The Doors gem "People Are Strange" had a first-night ramshackle nature to it, but did much the same towards the end of the night.) And McKay thoroughly reawakened me to the Kinks tune "Sunny Afternoon" by helping me remember it contains the bitching of a one percenter annoyed about paying taxes.

I've never paid much attention to Joe Allen McDonald -- aka Country Joe of Country Joe and the Fish. (Maybe it's their name, which always sounded so silly to me.) But with three covers spaced throughout the evening, McKay made a case for me to do some catching up on this songwriter, thanks to "Janis," "Not So Sweet Martha Lorraine," and that protest classic "I-Feel-Like-I'm-Fixin'-To-Die Rag," a tune about gleefully going off to war that is sadly all too timely and probably always will be.

The band did offer strong backup, with bassist Alexi David shining on a delicate version of Steve Miller's "Quicksilver Girl," guitarist Cary Park freaking out appropriately on "Hungry Freaks, Daddy" and drummer Kenneth Salters doing formidable work throughout. It's a little hard to rock out while you're sitting down, but they stirred up the crowd here and there.

Still, given the cabaret setting, the high points were often the quiet numbers, like that gorgeous "Quicksilver Girl." The Sopwith Camels' "Hello Hello" ("Would you like some of my tangerine?") was an off kilter delight, Dylan's "Clothesline Saga" allowed her comic timing a workout and "If I Fell" worked charmingly, even without the double-tracked vocals that make the album version such a treat. And McKay -- alone at the mike with her trusty uke -- stopped time with a simply lovely delivery of the Gerry & The Pacemakers chestnut "Don't Let The Sun Catch You Crying."

McKay is such a protean talent, you want to follow her anywhere her interests go, from covers of Doris Day to originals to covers of the 1960s to -- hopefully -- a full-fledged Broadway musical someday, a context I think will allow her songwriting gifts to find their focus and then flower more fully than ever. As McKay's stand at 54 Below continues, the band is sure to gel further, allowing tunes where they take flight to become more and more frequent. This particular show may not win her new fans, but the faithful will surely be glad to see her again.

This was my overdue first visit to 54 Below, by the way, and it's easy to see why this has become a key venue in the cabaret world of New York. The setting has a speakeasy vibe, thanks to stairs heading down and down to the warm, intimate space. The staff took care to be as quiet as possible during songs, from the bartender mixing drinks down to the handsome waiters and waitresses stepping in quickly and thoughtfully during every momentary break. And while it's classy, it's not snobbish: you don't worry about not sporting a tux, the way some stuffy venues can make newcomers feel. One could get addicted to seeing great talent in such close proximity.

PlayCo -- the company behind the critically acclaimed work Generations -- is back with another genre defying piece of theater. In fact, it's a world premiere and the first piece the ambitious PlayCo has commissioned.

It certainly fits their international perspective. Written and directed by Aya Ogawa, this is a piece haunted by nuclear power gone awry. In Part One, a woman who fled her hometown after the Chernobyl meltdown is disturbed and thrilled to see her nephew and a friend playing a video game set in that desolate landscape, giving them tips about where to head to find food and safety, while flashing back to the traumatic day her life changed forever.

In Part Two, a pair of Japanese sisters struggle to reach an understanding as one tries to convince the other it's time to leave a town near the Fukushima disaster, a place where devices to measure radiation are now commonplace. Oddly, the action of this section is guided by the audience, as they are repeatedly given options about what could happen next and vote for one of two or three choices.

In Part Three, two humans -- perhaps the last two real humans in the world? -- struggle to connect while surveying the many "ground zeros" they observe on the Earth's surface and looking for signs of life.

This is heady, rich material and Ludic Proxy has an innate intelligence and commitment to the work that keeps your interest, even if the dramatics are lacking. The first piece, especially scenes with young kids talking in Russian while an adult narrates her flashbacks, is easily the strongest. Young love, naive refusal to accept what's happening and sibling rivalry all place us on firm ground.

Still, the distancing effect of technology quickly steps in. Cleverly, we watch them play a video game by seeing the actors manipulate tiny cameras and moving them through a doll-house style maze that represents our heroine's childhood apartment. It's neat, but the stunt doesn't really pay off.

That distance from the material is doubled in Part Two. A woman who chooses to live near Fukushima out of loyalty is faced with a wrenching moral dilemma (I suppose; the choice seems obvious to me -- run! Though of course that ignores the deep bond to family and ancestors in Japanese culture.). But the laborious stunt of having the audience vote on what happens next keeps us at arm's length again. It doesn't resonate in any sense of fate controlling your destiny or the characters being like avatars in a video game or anything else. Indeed, it barely seems to make sense in terms of what comes before or after except on the chilliest of intellectual levels.

I've read a lot of sci-fi, so Part Three is comfortable territory for me, with its post-apocalyptic landscape and humans who are hold-outs in a world where everyone has been "upgraded" to automatons of one sort or another. But with a red herring or two and a murky storyline, it's hard to feel engaged. So after a successful start to Part One, we spend the rest of the show working hard to enjoy each piece on its own or connect them one to the other.

On the plus side, Ogawa has a fine cast that gives their all and the tech elements are strong, from the minimal but effective sets of Jian Jung to the herculean effort of Jeanette Oi-Suk Yew on lights and video (with surely a small budget) and especially the well-crafted and crucial sound of Michael Kiley, which sets the mood effectively even before the show begins. All six actors have strong moments, from Megan Stern's sweet turn as Past Nina to Saori Tsukada's convincing Dad to Chris Henry's winning appeal in every era. It doesn't begin to add up, but the teamwork on display makes it a pleasure to mull this over. Ludic Proxy is surely the very sort of downtown theater that should be supported by bold companies and even bolder audiences who want to encourage new voices.