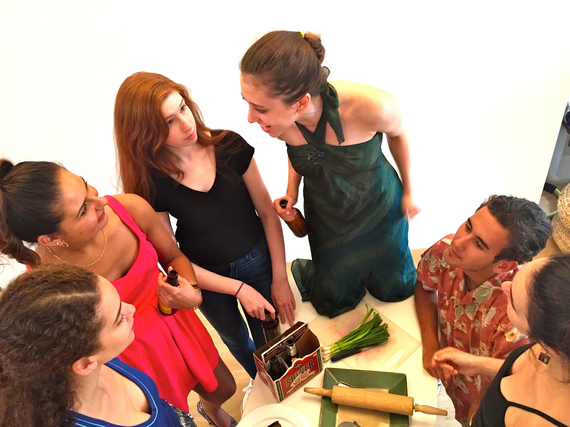 It's Saturday night. Raina wants Casper. Nicky wants Raina. Vivian wants Perry. Perry wants Willow. Willow's a lesbian, in love with Salima. High school is almost over. It's a party. And nobody is dancing.

Except it's not Saturday night. It is in fact a humid Thursday afternoon in early July, high school is now over, and this is actually a rehearsal for a new play, due to open soon in New York City. The actors in the room are all recent high school graduates and the struggles they are depicting - boredom, unrequited love, sexual identity, grasping for the future, holding onto the past - aren't so distant for the young actors themselves.

In fact, these struggles are what inspired the play in the first place.

The Tangibles will be the debut production for Rascal Arts, a new theater company founded by members of the 2015 graduating class of New York's famous performing arts high school, LaGuardia. The play was written by India Kotis, an emerging playwright who has already won a Young Playwrights National Award, as well as a Scholastic National gold medal, for her work. Kotis will also play Raina in the upcoming production and while taking a quick break from rehearsals she describes how she was "hyper-conscious" that she and her friends were "at the tail end of an era." When her friend and fellow classmate Lily Berman expressed an interest in directing a play, India set about writing something that would capture "golden snippets from high school."

"It is scary and interesting working on characters that are close to ourselves," says Leilah Rosen, who plays the flamboyant but disheartened Vivian. "India is eerily perceptive, seeing things in us that sometimes we didn't even see." Stephanie Rey has similarly learned about herself in her role as Salima. In particular, she's learned a lot about how other people perceive her. "I'm Puerto Rican and live in the Bronx and India's play captures how people see a girl like me, from a neighborhood like mine." 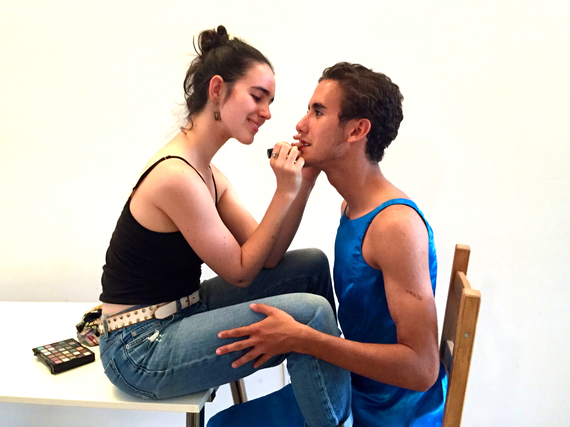 Rick Rocha recently joined the cast and was not the original inspiration for his character Nicky. However, he's making Nicky his own and Rick believes that the play captures the teen world in which he lives and is deeply familiar. "It's a mirror of a reality that exists in New York among young people," he says. "A fifty year old, not even a twenty year old, could write this." Watching the teens rehearse with such presence, awareness, and honesty, it's hard to imagine anyone older acting this play either.

The Tangibles holds up a mirror to a very specific world of artsy New York high schoolers, yet the play wrestles with bigger questions of meaning, communication, and our very humanness. The Tangibles is as much about intangibility and how hard it is, in spite of our shared want for connection and happiness, to understand each other. "No one really says what they mean in this play," says Rose Stoller, who plays the hip but struggling Willow. "Our job as actors is to say what we mean by saying what we don't mean."

Consciously or not, the play also pays homage to the theater greats. The ennui, the unity of space and time, and the sense of an era slipping by are perfectly Chekhovian. While the waiting, the silences, and the oblique exchanges between characters, not to mention the play's final line "Now what?" could easily be found in Samuel Beckett.

The precocity of the group, the show, and their playwriting skills is not surprising, of course. "We learned so much at La Guardia," says Margaret Leisenheimer who plays Zoe in The Tangibles. She added that New York's "Fame school" gave the young company "the skills and training to go out there and do this." However, this experience of actually creating a company and writing, directing, and producing an off-off-Broadway play is completely new for everyone involved. 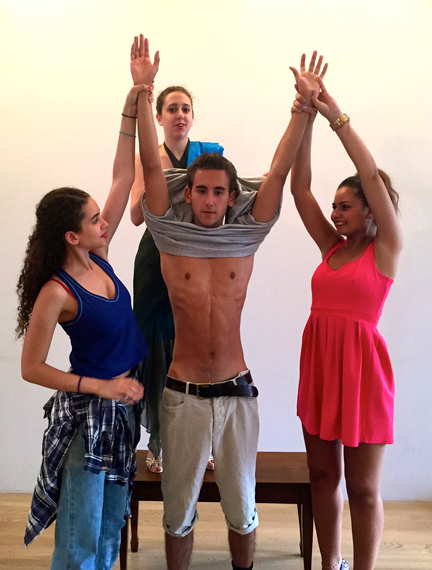 Lily has never directed a full show before and has gone through a "huge learning curve." "Directing friends has its challenges but it has been a great training ground because I know the actors well and know their acting." Paige Simunovich, the show's assistant director, who played Jane Banks in a national tour of Mary Poppins when she was younger, echoed this: "We have been taught by the same people. The show has come along so much quicker than any every show I've been in, because we are free to ask questions and simply say, 'I don't get it.'"

Willem Marx plays Perry and is rehearsing for this show amid preparations for the shooting of Red Oaks, a new Amazon TV series in which he will have a recurring role. Willem thinks that The Tangibles is more authentic than other productions he's worked on, mostly because of the way they have "grown and shaped it as a group." The collaboration has not only been limited to the artistic aspects of the show, but also to the fundraising, promotion, and logistics of forming a new theater company and putting on a play in New York City. Leilah feels the Rascals have created for themselves "an intensive for free," which is providing valuable experience for the theater and acting careers many of the group wishes to pursue.

Most importantly, the production has given the Rascals an opportunity to make theater "on their own terms." India points out that her play has "five roles for women, and just two for men." This ratio is unusual in theater, even today. But in creating her own play, with a lot of input from her peers, India could write an array of interesting and unique roles for young women. Thanks to the freedom allowed to India and the group, Stephanie is especially pleased not to play a stereotype: "I know that in the professional world I will go to a million auditions and walk into rooms full of girls with tan skin, curly hair, and hazel eyes, all trying out for a one-dimensional 'Hispanic girl' part. But Salima in this play is smart and interesting. She has dimensions."

The Tangibles is a play of dimensions. It captures a slice of teen life in New York, but also speaks to struggles and joyfulness, ambition and languor, that is much more widely felt. Unlike the characters in the play, however, the recently graduated Rascals do not seem stuck asking "Now, what?" It is clear that this group of young people know exactly what they want and they are doing it now. They are making New York theater their own.

This is my second article about teen-produced NY theater. See here for my first article about an off-Broadway production of Alice's Adventures in Wonderland.