In 1939, when Gertrude Stein published her novel The World Is Round, it was ostensibly for children even though Stein hadn't retreated one bit from the elusive, modernist style that perplexed so many who preferred their novels to have plot and characters and dialogue of a sort.

Dr. Seuss it ain't (though in fact, it sort of is). The publisher offered up this advice to adults on the dust jacket of the book:

It is one of the less likely sources for a satisfying work of theater. But director Rachel Dickstein and the Ripe Time company chose it to follow up Septimus and Clarissa, their marvelous adaptation of Virginia Woolf's Mrs. Dalloway. That novel was also shocking for its time, with a stream of consciousness style that bewildered many. Today, however, while it feels as fresh and bold as ever, Mrs. Dalloway seems eminently accessible. The World Is Round remains more gnomic and surreal.

And yet, here it is, playful and musical and beautifully presented. Utterly faithful to the text and the spirit of Stein's quicksilver intelligence, it also reveals with simplicity the fable that undergirds the word play, the rite of passage that delivers a young child into the fearful adult world of responsibility and possibility and wonder.

The tale is straightforward. Rose is a defiant, smart, willful child. She learns at school, plays with her cousin Willie, is frightened by the lions of her imagination and finally notices the mountains that have always been nearby. Intrigued, frightened and challenged, she decides to climb a mountain, bringing along only her comforting, blue chair. 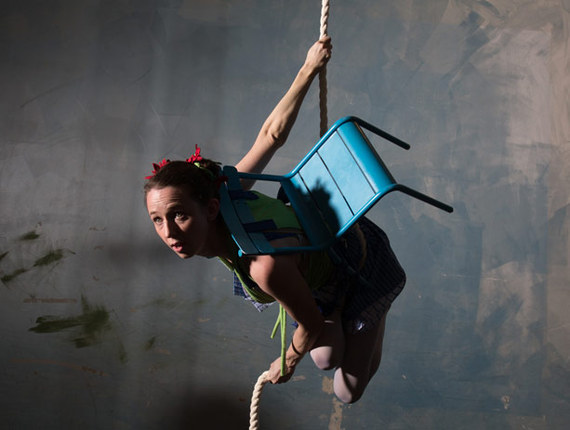 She climbs higher than high, but discovers others have been there before and that spurs her on again. Rose climbs even higher, all the way to the top and sees others have climbed their own hills and she is ready for anything, a little awed by the new vistas but ready nonetheless.

This narrative is presented by four actors who work seamlessly as an ensemble. Kristen Sieh delights as the winning young heroine, Grace McLean is the grown up Rose looking back at this transformative time, Blake DeLong is the Lion and other various creatures and Hannah Heller steals the show as the willful Willie.

Conceived, written and directed by Dickstein -- with the ensemble billed as collaborating on the creation -- The World Is Round takes place on a bare stage with a large, circular screen overshadowing the space, a circle in the middle opening up to the darkness beyond. The spare, effective set is by Mimi Lien, with evocative costumes by Ilona Somogyi that straddle the line between dress-up and child-like. Somehow the actors seem like kids playing adults and adults playing kids and both and neither. The lighting (Jiyoun Chang) and sound (Jane Shaw) and playful projections (Hannah Wasileski) combine throughout to change the tone and mood on a dime.

And it's filled with music, thanks to a wonderful score by Heather Christian with lyrics taken from the text. The rhythmic pulse was always there, of course. The publishers weren't the first to suggest tackling Stein as pure inventive wordplay, as sense built out of seeming nonsense. But the songs created that propel the story forward make crystal clear how Stein's words properly presented are not gibberish, but emotional, funny and true. (Go here to listen to selections from the show on Sound Cloud.)

But what's impressive is how even more obscure passages come to life. I'd never read The World Is Round (or, forgive me, more than bits and pieces of Stein's work) and this show held me firmly in its grasp. I was briefly lost -- like Rose -- during two passages. A section involving the Lion and her dark night of the soul while climbing the mountain felt murky to me. But I never doubted the show would pull me back in.

The actors were so engaging as kids with forceful adult-imagining personalities, it felt for a while to me like some sort of avant garde You're A Good Man, Charlie Brown. But once Rose began her journey up the mountain, it became less rooted in the imagination of kids and more timeless. My guest is deeply familiar with both Stein's work and the novel The World Is Round in particular and was delightedly stunned by what they accomplished.

The clever swirling video projections, the simple effect of watching Rose climb a ladder into the sky (with a blue chair strapped to her back), the marvelous musical settings and the committed performances show this to be a collaboration in the truest sense between the artists and all of them with Stein. Hopefully, we won't have to wait years to see what Dickstein and Ripe Time tackle next.

YOUR MOTHER'S COPY OF THE KAMA SUTRA ** out of ****
PLAYWRIGHTS HORIZONS

I shudder to think of my mother's (Battered? Dog-eared? Overly thumbed?) copy of the Kama Sutra. But the provocative, meaningless title of this new play by Kirk Lynn isn't the only hook for playgoers.

Just like the bait-and-switch title, this elaborate scheme proves to have very little bearing on the play. It's elaborately described, begun in earnest and yet goes nowhere emotionally or dramatically.

Indeed, the entire purpose of this conceit seems to be to highlight the fact that Reggie (Chris Stack) suffered some incestuous sexual abuse from his older brother, a fact he's reluctant to share with his fiancé (Zoe Sophia Garcia), even though his old girlfriend and best pal Tony (Rebecca Henderson) knows the story. But Carla hardly needed to posit such a strange pact for Reggie's painful past to act as a barrier between them. Adding to the confusion is a subplot that takes far too long to reveal its link to this couple's story. Despite some fine actors, the result is a murky, shambling tale that director Anne Kauffman can't bring to life for more than moments at a time.

Lynn's nutty scheme makes sense in context. The show begins with Reggie and Carla playing sex games quite readily, though Carla is clearly the driving force. She's blindfolded Reggie with his tie and he's stumbling around the stage as Carla provocatively urges him on. Utterly at her command, Reggie pulls out the ring he's been hiding and asks her to marry him. Not even certain of where Carla is standing, he holds out the ring tentatively first this way and then that.

Thus, Carla's proposal hardly comes out of left field, however odd it may be. And the sexy Garcia lets us wonder about how in control this woman is with a man who offers uncomplicated love. In the next scene, they've reenacted one of her memorable bouts of love-making from the past and Reggie is reeling from the strap-on she employed. He's game, but a little overwhelmed.

It's clear this hasn't been terribly well thought out or that Carla is maybe manipulating things as they go along. Is she provocateur or just deeply confused herself? Reggie thinks they're going backwards chronologically in terms of sexual history. (Which would have a nice dramatic arc - two lovers could move together from the jaded sexual antics of adults towards the innocent sweetness of youth where a kiss and holding hands was wildly fulfilling). Carla mocks his need for "rules." Then she upends his -- and our -- understanding about the purpose of this ritual. It's not to see if they're suited for each other, she insists. They are already committed as far as she's concerned; this will just deepen their bond.

Okay, but then we're thrown for another loop by a lunch between Carla and his old flame Tony, who clearly still has feelings for Reggie under her brittle, business woman surface. Tony is going to be Reggie's best man, but Carla asks her to refuse. What power play is this? Is Carla just messing with Reggie? Must she control every aspect of his life? Does she even love him?

Well, toss all those questions aside. Act Two reveals that Carla and Tony became bosom buddies and she and Reggie were as far as we can tell a very happy couple.

SPOILER
Our head spins as all the plates in the air from the first act simply disappear, along with Carla, who has died.

At least one question is resolved: In the first act we kept cutting to scenes of teenagers, including the creepy Cole (an effective Will Pullen) who is pushing his pal Sean (Maxx Brawer) to use the date rape drug on a girl he likes named Bernie (Ismenia Mendes). Finally, in the second act I realized these were flash-forwards to the dilemma of Reggie and Carla's daughter Bernie, who is reeling from her mother's death, feels surrounded by ghosts and her grieving dad and doesn't know how to deal with the fact that she has her own sexual abuse to deal with.
END SPOILER

If your head is spinning, join the club. The show begins with a very elaborate sexual game, tosses in sexual abuse, grieving, parent-child relationships, unrequited love and more -- all of it handled haphazardly and uninterestingly.

This barren plot is reflected in a near empty set by Laura Jellinek. At first, I assumed Reggie and Carla were playing their sex games in an apartment or home they'd just moved into and was thus unfurnished. But this banal space dominates for the entire show, anonymous and undefined. The actors are uniformly solid, even when their characters are not. Garcia adds a mysterious quality to Carla, while Chris Stack is a reasonably befuddled Reggie, just as lost when dealing with the controlling Carla as he is when trying to parent his defiant, unhappy daughter. Henderson has the best lines as Tony, a savvy negotiator who treats every interaction like a business deal.

The kids are equally strong. Mendes must moan about her dad at every turn, but somehow keeps Bernie likable. Brawer is very appealing and has a nice wry way with his dialogue. And Pullen is utterly convincing in a James Spader-like way as the manipulative Cole.

It's a credit to the skill of all the actors involved that the show maintained what little interest it did, even as Lynn's story went off into various meandering directions, capped by the useful if banal idea that treating sexual assault as a shameful secret can take its toll. The Kama Sutra, needless to say, is never even glimpsed.

Thanks for reading. Michael Giltz is the founder and CEO of the forthcoming websiteBookFilter, a book lover's best friend. It's a website that lets you browse for books online the way you do in a physical bookstore, provides comprehensive info on new releases every week in every category and offers passionate personal recommendations every step of the way. It's like a fall book preview or holiday gift guide -- but every week in every category. He's also the cohost of Showbiz Sandbox, a weekly pop culture podcast that reveals the industry take on entertainment news of the day and features top journalists and opinion makers as guests. It's available for free on iTunes. Visit Michael Giltz at his website and his daily blog. Download his podcast of celebrity interviews and his radio show, also called Popsurfing and also available for free on iTunes.