How many Broadway musicals can you name that concern themselves with the agony and ecstasy of creating art? I remember one: Sunday in the Park with George by Sondheim. And now there's a second, the Kennedy Center's Little Dancer which debuted last night. Commissioned by the Center's former president, Michael Kaiser, this seven million dollar musical evokes the glamour, backstage politics, and social underbelly of the Paris Opera Ballet, a company that expected its youngest dancers to mingle with its wealthy patrons. So along with its art motif, this show, set in 1880, becomes a soaring paean to the majesty of ballet while also revealing the price of being a dancer in the nineteenth century.

If you're seeking charming, often winsome melodies you can't get out of your head, stirring performances by the leads with fine work from the supporting cast, and a book that will intrigue and ultimately move you, run to the Kennedy Center box office. Sadly, for D.C. audiences, the show will close on November 30, but with some tweaking this highly original musical will enchant theatergoers if it moves to to New York. Director-choreographer Susan Stroman has created palpable magic in tandem with composer Stephen Flaherty and lyricist-book author Lynn Ahrens, the Tony winning team responsible for Ragtime and Rocky. 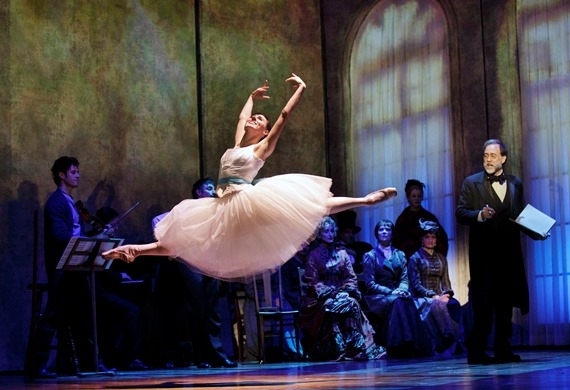 Little Dancer is unique in its use of ballet, one of the inspirations for the work of Impressionist painter Degas. The curtain opens with its titular heroine, Tiler Peck, dancing alone on stage. Ms. Peck, a principal at New York City Ballet, has a gorgeous technique, and her talent is beguiling as she whirls into the hypnotizing opening number, "C'est le ballet." The way she whips off a dozen or more fouettes is a treat, and her radiance shines and grows ever brighter as the plot unfolds.

Ms. Peck plays the teenage Marie von Goethem, a petit rat (or member of the corps) at the Paris Opera Ballet. Marie's older self is portrayed by Broadway veteran Rebecca Luker who becomes a solo Greek chorus, interpreting the young Marie's actions and emotions in song. This is an intriguing device that occasionally seems redundant, but Ms. Luker's luminous, resonant soprano is another of the show's highlights, and her final scene with Janet Dickinson, who brings elegance and wit to the role of artist Mary Cassatt, is heartbreaking.

Marie, of course, is the poor but ambitious "rat" whom Degas decides to paint, then sculpt for his controversial statue, "Little Dancer Aged Fourteen." In the hands of four-time Tony winner, Boyd Gaines, the half-blind painter is irascible and lovable, and sings with a reliable baritone that communicates his angst. Degas forms an attachment to Marie that is the emotional core of the musical, and the scenes between Mr. Gaines and Ms. Peck are touching. Right now, the ballerina's brilliant dancing outpaces her acting and singing, but she is a natural on stage and her other skills may develop. Sophia Anne Caruso as Marie's kid sister Charlotte sings angelically, and adds pathos to her duet with Ms. Peck, "Little Hole in the Wall." Kyle Harris plays Christian, a violinist who courts Marie, and his solo, "Musicians and Dancers and Fools" is another delightful number.

In a role without billing (which seems like an oversight), Karen Ziemba portrays Marie's abusive, alcoholic mother and nearly steals the show. Ziemba's worked on Broadway for years, and she acts and sings with panache. I also enjoyed Jenny Powers as Marie's courtesan sister, Antoinette, whose silvery soprano was thrilling in "Little Opportunities," and Sean Martin Hingston as her unfaithful lover, who danced with abandon as he tried to seduce Marie in a maze of hallways.

Little Dancer offers something unique, a dream ballet , once a staple of musicals such as Oklahoma! and Carousel. In the tradition of Agnes de Mille, Ms. Stroman cleverly allows the audience to view Marie's sad future. Little Dancer is not a "feel good" musical as it moves toward its climax, but a thought-provoking one.

I've seen many clever theatrical devices in recent years, but few have affected me as much as this show's last scene. "Art isn't easy," as Sondheim wrote in his musical about painter Georges Seurat. But sometimes it's more beautiful than you can imagine, and Little Dancer proves this again and again especially during the finale which took my breath away.

Special kudos to Beowulf Boritt, scenic designer, and William Ivey Long, costume designer, for creating an impressionistic and visually stunning world of nineteenth century Paris with all its vivid colors and flounces. Conductor Shawn Gough does an admirable job in the pit, making the score sound lush and lyrical.

Little Dancer runs through November 30 at the John F. Kennedy Center for the Performing Arts in Washington, D.C. For information, visit www.kennedy-center.org.