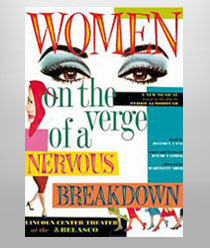 Neither the complete train wreck some people predicted nor the fizzy blast of fun promised by the marriage of Pedro Almodovar's classic comedy with songs, Women On The Verge Of A Nervous Breakdown is simply a new musical that doesn't work and has almost no good songs. Undoubtedly Laura Benanti will be singled out for her winning performance (it helps that she has the only good song) -- they might say she's the only one to remain unscathed by a show overstuffed with talent. But in fact, no one is hurt here. It was a great idea and simply didn't work. It happens.

If you haven't seen the film, by all means rent it. It's one of the best films of the Eighties and wildly entertaining. Transposed to the stage, the story is about voice-over actress (and TV commercial star) Pepa (Sherie Rene Scott) who has been dumped by her lothario boyfriend Ivan (Brian Stokes Mitchell). Ivan has a crazed ex-wife Lucia (Patti LuPone) and a son he rarely talks to (a solid Justin Guarini in his Broadway debut). Pepa has her ditzy coworker Candela (Benanti) and a taxi driver who is always there when she needs it (Danny Burstein). Throw in a terrorist, gaspacho laced with valium, the police, a burning bed and a two-timing lawyer named Paulina (de'Adre Aziza) who is supposed to represent Lucia but has fallen for Ivan instead and you've got yourself a wacky comedy.

Where to begin? The sets are frantic and always in motion. The design is meant to evoke the charming collages that Almodovar created for the film. But done digitally, the collages just look messy. Plus, with lines moving in and out as frames of sort, the design echoes Mondrian instead of Pop Art. Then when a taxi goes for a spin, the backdrop is animated and looks like nothing that came before. It's a mess. Worse, it's cluttered, with images displayed on the back of the set partially blocked by all the moving parts (stairways, furniture, a balcony and much much more). It's such a problem they desperately plaster the video of one of Pepa's commercials on the back wall and the side of her fridge, just to be sure people can actually see it.

And I do mean the set is frantic. Everything is constantly in motion to create a cinematic effect that is simply exhausting. Sometimes, characters exit towards one side than spin around and walk across the stage so they can be near a prop that will pop up on the other side (like a phone booth) in the next scene. If someone places a piece of luggage on the ground, it's certain to be mechanically whisked across the stage sooner or later.

Most of the lead actors are not Latino and certainly not Spanish. Unfortunately, they're encouraged to speak with a Spanish accent of sorts, which is just distracting. With this cast, why didn't they just decide that Madrid was a state of mind and not worry about the accent? Lead Sherie Rene Scott actually sings with an accent and the need to maintain her accent keeps her from singing the way we know she can. LuPone doesn't really bother when she's singing. Only Benanti belts it out with any sort of convincing style.

it doesn't help that the songs are almost uniformly weak. The opener "Madrid" is a so-so scene-setter sung without panache by the taxi cab driver/narrator (Danny Burstein). A whip-smart, frantically paced comedy doesn't need a narrator -- forward motion is everything and narration just slows us down. One or two early tunes have a genuine Latino lilt. But only Benanti's show-stopper "Model Behavior" hints at what might of been, with its amusing lyrics, twisting pace and comic punch.

The behind the scenes talent is exceptional, including director Bartlett Sher (South Pacific), book writer Jeffrey Lane and songs by David Yazbek (The Full Monty, Dirty Rotten Scoundrels). But a show can be overstuffed, especially in its cast. Both LuPone and Mitchell are such big stars, the creative team clearly felt obliged to showcase them rather than do what's best for the show. That's why the minor character of Ivan has not one but two solo numbers, with the second one -- "Yesterday, Tomorrow and Today" -- especially weak. That appears in the second act and is soon followed by Lucia's second big number. LuPone is given an entirely made-up court room scene so she can belt out "Invisible," a song about growing older and less attractive to men. It's serious and stern and completely out of character with the rest of the show. (As is her earlier number, which oddly echoes Sixties pop songs from America. Why?) Anyone can see that both these numbers needed to be cut, but who's going to tell them that? Amidst all the additions, we lose sight of the evil lawyer Paulina who in the movie at least gave us someone to root against and set the plot in motion.

The two people to benefit the most from this unfortunate misfire are former American Idol finalist Guarini and Benanti. Guarini probably wisely avoided making his Broadway debut with the Beach Boys musical Good Vibrations, which he was involved with during its early stages. This is a much better showcase for his genuine talent. Guarini sings nicely, especially in his tune with Mitchell, "The Microphone." And he gets to be sexily paired to stammering delight with Benanti. Benanti doesn't ham it up -- that's not quite the right word for her charm here. But she relishes the ditzy, over the top nuttiness of her character (dating a terrorist, falling off the balcony, flirting with Guarini) and is clearly the one person having a blast throughout. Certainly no one else could be.

What others are saying:

Ben Brantley of The New York Times said, "Packed with talent and creativity, and a cast and crew bristling with Tony Awards, "Women on the Verge of a Nervous Breakdown" is nonetheless a sad casualty of its own wandering mind."

Joe Dziemianowicz of the New York Daily News gave it a 2 out of 5 and said, "The show-stealing performance comes from a laugh-out-loud Laura Benanti, as Candela, a model who's accidentally hooked up with Madrid's most-wanted terrorist. She turns "Model Behavor," a song made up of ever more desperate phone calls to Pepa, into a delirious jolt of joy. At that moment, the show's antic energy makes sense, but otherwise the production just seems frantic.... But despite the constant motion, "Women on the Verge" doesn't go anywhere."

Elisabeth Vincentelli of the New York Post gave it 3 out of 4 and said, "The show is flashy, breathless, busy. It's a mess, but it's a big, fun Technicolor mess. Flinging itself forward with desperate energy, this new musical never coagulates into a coherent whole. Luckily, many of its parts are vastly entertaining."

John Simon of Bloomberg said, "Heroic efforts from the remarkable singing actresses Laura Benanti, Patti LuPone and Sherie Rene Scott and the equally accomplished Brian Stokes Mitchell can't disguise the fact that "Women on the Verge of a Nervous Breakdown" is an unholy mess. Along the way to Broadway from Pedro Almodovar's off-beat Madrid, inspiration suffered its own breakdown."

David Finkle of Theatermania.com said, "If waste were the eighth deadly sin, Women on the Verge of a Nervous Breakdown, now at the Belasco Theatre under the auspices of Lincoln Center Theater, would be accused of committing it big-time. Rarely has a show squandered so much major musical comedy talent."

NOTE: Michael Giltz was provided with free tickets to the show in previews with the understanding that he would be writing a review.