One of the greatest talents in film history, Preston Sturges is best remembered for four stellar comedies: The Palm Beach Story, The Lady Eve, The Miracle At Morgan's Creek and Hail The Conquering Hero. Others also treasure Sullivan's Travels and Unfaithfully Yours, but however you order them, these are some classic films. And of course he won the Oscar with The Great McGinty. But before all that he was a playwright. In 1928, he starred on Broadway in one show and wrote another one called The Guinea Pig that opened to raves in Massachusetts and transferred to Broadway. But the real monster success came next when Sturges delivered the comedy Strictly Dishonorable. He wrote it in six days, it ran for 16 months and he grossed a remarkable $300,000 just as the Great Depression was hitting its stride. Sturges then wrote three more shows (including a musical!) but Hollywood came calling and he was soon gone for good.

Now The Attic Theater Company has revived Strictly Dishonorable with panache and it sure makes me hungry to see his other theatrical works too. Honestly, I only showed up out of polite interest as a Sturges fanatic, wondering if glimmers of his genius would be visible. Indeed, his sparkling, distinctive gift for dialogue and whiplash changes in emotion from sincere to silly are on full display. And from what I can tell by clips online, this production looks markedly better than the creaky 1931 film version and much, much better than the godawful 1951 remake starring Ezio Pinza and Janet Leigh. You'd be foolish to miss it. 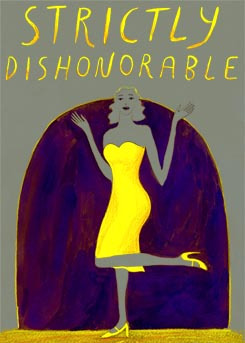 Set in a speak-easy in 1929, it begins with the Italian staff squabbling amongst themselves until their regular customer the Judge (John Robert Tillotson) ambles in for just one drink. Almost by accident, a couple of squares arrive, the prickly Henry Greene (Thomas Christopher Matthews) and his sweet, Southern, slightly put-upon fiancee Isabelle ((Keilly McQuail). He wants to leave immediately but she's eager to sample a speakeasy and surely none too eager to return to his mother-in-law in West Orange, New Jersey. (The play was written almost one hundred years ago and the jokes about Jersey are still getting laughs.)

Henry's an unlikable fellow in the usual Sturges manner: he batters down his girl with fast talking, brusquely demands his drink and then wonders why the service is so poor, takes offense easily and is so clueless in his rude indifference to her and everyone around him that you can't help feeling sorry for the guy just a little, even as you suspect most of us barrel through life just as blithely indifferent at times to others as poor Henry. In walks the good-looking professional opera singer and amateur (but very successful) lothario named Gus (Michael Labbadia) and, well, Henry hasn't got a chance.

Director Laura Braza keeps this romantic comedy rolling with aplomb, striking the right note with the entire cast. Some judicious pruning might have made the first act fly by quicker. And it's to be hoped the cast will tighten up and move things along even faster as they settle into the run of the show. But they are in sync with the material from the start and the actors are essentially faultless.

Gus might easily be a cheesy wooer of women, but Labbadia -- in his New York debut -- gives him heart and humor. And when he's asked to sing, I imagined they might get a quick laugh by playing a record and having him lip sync (he's supposed to be a world famous talent, after all) but instead he pulled off a nice little number well enough to maintain the illusion. Funny and winning, he also sports an Italian accent just this side of silly (like all the actors in the show) which is part of the evening's charm.

As the speakeasy owner Tomas, Christopher Tocco is also excellent, anchoring much of the evening with his affable presence and mining subtle laughs throughout. William John Austin as an Irish cop who happily looks the other way when a glass of "ginger ale" is offered as an inducement, is similarly fun in a smaller role. As a waiter and lookout, Ryan Trout and Nick Ritacco are also spot-on. It's a pleasure to see a show so well directed where everyone is on the same page.

The handsome Matthews for me was the most empathetic to the style of performing perfected by the actors who worked with Sturges in film after film. He steamrolled through his dialogue with verve, exploded in futile anger with just the right level of indignation and even took a nice pratfall. If Sturges were around, he'd make sure Matthews worked in his next project as well.

Tillotson is a pro as the Judge. I'm not sure if it's the writing or his performance choices, but I wasn't always clear as to where the Judge was coming from. And with Sturges, characters are often driven by an all-consuming quirk or passion. Is the Judge in love with Isabelle himself? Or perhaps fancies Gus? An old busy-body? A self-important fool? Mostly Tillotson plays him -- rightly -- as sweet and good-intentioned. To be clear, he delivers some of the play's best lines with dead-pan accuracy.

The Judge is perhaps a gentle voice of conventional morality when Sturges will have none of that -- we soon see Gus proving his love for Isabelle by not sleeping with her while she's convinced his refusal to bed her is proof that he doesn't. And when he begs her to marry him, why she's convinced even more that he doesn't! (It makes sense, somehow, while it's happening.)

And that brings us to the show's star Keilly McQuail. This is a very fun revival that would surely work with another actress in the part. But McQuail is a genuine find -- convincingly Southern, sweetly sexy, timidly bold, believable in her relationship with Henry (hey, it gets her out of Yoakum, Mississippi!) and yet just as believable when she finds the courage to blaze her own path. McQuail brought out the best in everyone around her, handled physical comedy and emotions ranging from aroused to uncertain and looked great in her flapper outfit while doing it.

With modest means at their disposal, the scenic design by Liz Sherrier, the costumes by Travis Chinick and the lighting (David M. Upton) and sound (Beth Lake) all worked in harmony. I'll be remembering this show fondly at the end of the year. Given the talent on display, I'm hopeful it will be even tighter and better at the finale of what should be an extended run as it was at the beginning. Now bring on The Guinea Pig!

_____________
Thanks for reading. Michael Giltz is the founder and CEO of the forthcoming website BookFilter, a book lover's best friend. It's a website that lets you browse for books online the way you do in a physical bookstore, provides comprehensive info on new releases every week in every category and offers passionate personal recommendations every step of the way. It's like a fall book preview or holiday gift guide -- but every week in every category. He's also the cohost of Showbiz Sandbox, a weekly pop culture podcast that reveals the industry take on entertainment news of the day and features top journalists and opinion makers as guests. It's available for free on iTunes. Visit Michael Giltz at his website and his daily blog. Download his podcast of celebrity interviews and his radio show, also called Popsurfing and also available for free on iTunes.