Because I'm a list-making fool, when I was shuffling through two decades of Playbills and deciding what to keep I also decided to merge all my lists of play-going over the years and then list them alphabetically, then by rating and then by year. (Sadly, I'm that kind of guy.) The result is my Theater Master List, a quick overview of two decades of theater-going in New York City as well as some surprises. Despite seeing multiple Shakespeare plays every season, is it possible I've never seen The Merry Wives Of Windsor? Pericles, Prince of Tyre? No King John? (And god knows how many other History plays I've missed; they do tend to blur a bit.) No Troilus and Cressida? Heck, one of my favorite playwrights is Tom Stoppard and bizarrely until a few weeks ago I'd never seen or even read Rosencrantz and Guildenstern Are Dead.

So the most famous playwrights surely offer a few blank spots for even avid theater-goers to fill in, since so often they're represented again and again by the same plays. Bizarrely, I've never seen The Threepenny Opera (the last Broadway revival slipped by) despite loving the score. That gap will be mended thanks to the upcoming version starring F. Murray Abraham. And while I've seen Brecht's Galileo many times starting in college, it was Abraham I saw recently in another staging at Classic Stage Company. (You can see this company all over my list, including quite a few rare four star raves.)

They've been on a Bertolt Brecht kick and all credit to them. It's not just the well-known titles like Galileo and The Caucasian Chalk Circle. Now they've presented the earlier work A Man's A Man, a show they present as a turning point for the playwright, the pivot on which he found his voice and began to discover greatness. This production directed by Brian Kulick doesn't come close to making the case for A Man's A Man, but we do get a sense of the shape of the thing and why it excited them. How can you find your way into a work unless you start tackling it? They've begun the process here and hopefully others will pick up the ball and run with it. 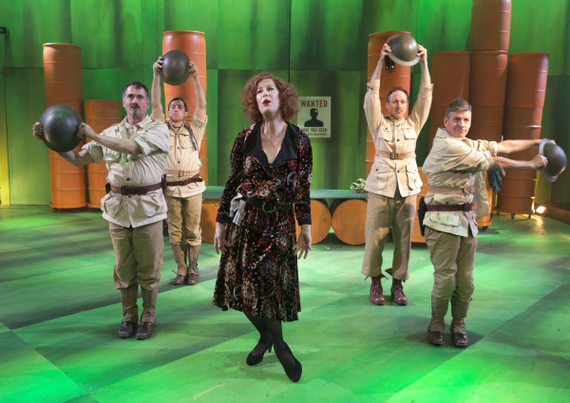 At first glance, the production design (so often a highlight at CSC, whose bare stage and modest resources often bring out the best in designers) is promising. Paul Steinberg has filled the stage with pillars of garishly orange oil drums, hinting at the base reason for all colonialism/war and more directly the jungle-setting for much of the action. Brecht's piece follows soldiers at war in India in 1925, men happy to pillage a local temple when they're not avoiding the wrath of their commanding officer or being marched off to Tibet for more "civilizing." Unfortunately, like so much of the show, it promises inventiveness but the drums are so laborious to move around and position -- here imitating a train, there an elephant -- that it feels more like drudgery than cleverness. The drums are always rolling about, calling attention to themselves, having to be hoisted in and out of the way of actors trying to enter or leave the scene. You can see all too clearly the effort going into each scene change and the magic is spoiled.

Similarly, Brecht's piece at least intellectually might appeal. Urged on by Kulick's enthusiasm, you can spot the playfulness on display here, how Brecht was tearing down walls, playing with form and finding his own dispassionate, merciless objectivity.

The action of the play is simple. Four soldiers -- members of a machine gun unit -- break into a temple and steal some loot. One of them is delayed for roll call and they con a local man named Galy Gay (Allan K. Washington) into taking the place of their friend. When their ruse is almost uncovered, they are desperate to keep the man in place and slowly bully and brainwash him into taking over the name and persona of their absent friend. It doesn't quite work until a court martial and potential execution looms -- what man would cling to his identity if it meant losing his life? Gay becomes a proper soldier and to their horror outshines them all in the machinery of war. Pity us all, Brecht seems to say, for how pitifully malleable we are.

The play has many shifts in tone and style but everyone seems to be stuck in their own particular version. The three soldiers seem to have wandered in from Gunga Din, lads more playful than rapacious. Jason Babinsky captures this mood best of the lot. Justin Vivian Bond plays the Widow Begbick, the proprietor of a traveling canteen and willing participant in their schemes. Bond seems to be in a broad satire. Begbick is a romantic foil for the murderous leader of their unit Bloody Five (Stephen Spinella in terrific costume and makeup by Gabriel Berry). Spinella is in a crushing drama. And as the key central character Gay, Washington straddles the line between naivete and Everyman with considerable skill, like Voltaire's Candide in a play by Beckett. His tone seems the most fitting and effective for this work but since everyone is at odds with everyone else stylistically, one can't be sure.

It's not a musical at such, but songs punctuate the show. Composer Duncan Sheik has set text by Brecht to music with effective results, never more so than the tune "cut" from the show that Bond performs at the end of intermission before the second act begins. No wonder Bond didn't want to give it up; the tune is the highlight of this laborious if noble effort. When Bloody Five reveals how he got his name (blithely executing some Indians for no good reason), the others are revolted, despite their own callous behavior. And when the man they strip down to his bare hunger to survive turns out to be an even more accomplished killer, they feel the horror of Dr. Frankenstein.

At least, that's what is suggested. What we feel is the sight of a rarely produced play that we -- and perhaps the talent involved -- has barely gotten a handle on. Whether it's just an awkward early effort or an unappreciated work of substance will take another mounting (or two) to figure out.