Why are some theatres like salad bars? The answer is simpler than you might expect. If you attend a production whose set is in full view as the audience enters the theatre, all kinds of possibilities come to mind before the performance actually begins. Although the architecture and props on display may look deceptively familiar, one never knows what might happen 30 minutes after going for the bait.

Two productions greeted Bay area audiences with sets that radiated an unusual sense of foreboding. One looked like a messy apartment with some tables, office chairs, and a large beanbag. The other was a decrepit, ominous-looking coastal shack resting on a cluster of eerily-lit wooden pilings.

Over the past few years, Bennett Fisher has been one of the driving forces behind the Flying Island Lab and San Francisco Theatre Pub. In addition to serving as an associate artist with San Francisco's Cutting Ball Theatre, he has collaborated with the California Shakespeare Theatre, Stanford Summer Theatre, and Crowded Fire Theatre Company (among others). Now working toward his MFA degree at the University of California, San Diego, the extremely prolific (and fast) writer can be seen discussing his creative process in this 2011 interview about Disinfect (Fisher's zombie aftermath play that was performed by the Un-scripted Theater Company).

Fisher's Campo Maldito is set in the unkempt office of a disruptive digital startup business headquartered in San Francisco's Tenderloin district. Ingersoll (Walker Hare) is a young CEO who has bet his entire future on bringing a killer app to market that could make him incredibly wealthy. White, arrogant, and with an unquestioning sense of entitlement, he has recently become increasingly paranoid and suspicious that he is being watched by some kind of avenging ghost. He's also been making some very poor business decisions.

A friend of Ingersoll's has referred him to Acosta (Luis Vega), an Hispanic man whose mystical powers as a Santeria priest may be able to purify Ingersoll's office space. However, unlike Ingersoll (who has never really been challenged by life), Acosta is a recovering alcoholic who has been living sober for 348 days. While he has no problem charging Ingersoll $1,000 as a consulting fee, Acosta quickly starts to realize that what Ingersoll views as a supernatural nuisance might be something quite different and much more commonplace.

Remounted from UC San Diego's Wagner Festival and presented in conjunction with the Bay area's Ubuntu Theater Project, Campo Maldito made its San Francisco Fringe Festival debut as an almost site-specific piece of theatre about gentrification and the spiritual cost of angering a dead (or sorely neglected) spirit. If hell hath no fury like a woman scorned, just wait and see what happens when that woman is a vengeful, alcohol-based demon.

Bennett's skill as a dramatist makes clever use of magical realism as the demon of addiction takes control of Ingersoll's body and uses it as a puppet to berate Acosta for abandoning her by giving up booze. Through the eyes of a terrified recovering alcoholic who is struggling to live sober one day at a time, Ingersoll's increasingly dangerous constellation of symptoms are revealed to be a direct result of the budding entrepreneur's growing dependence on alcohol.

In the following clip from their Kickstarter campaign, Fisher and Jesca Prudencio discuss the origins of and itinerary for their traveling production of Campo Maldito.

Intensely directed by Prudencio, Campo Maldito's two-man cast takes its audience on a riveting roller coaster ride through white privilege, around hairpin turns of desperation, careening downhill in a life-and-death struggle with the forces of addiction, and ending when dawn breaks over a terrified and confused alcoholic who is bottoming out. Walker Hare and Luis Vega turn in two grippingly athletic and memorable performances. Their work easily made Campo Maldito the most interesting entry I saw at the 2014 San Francisco Fringe Festival.

Over at the Ashby Stage in Berkeley, Shotgun Players presented Enda Walsh's 2005 dark, twisted and deliciously dysfunctional dramedy of nostalgia entitled The New Electric Ballroom (which may well rank as one of the few Irish plays in which alcohol is neither a major concern nor a steady presence). When Walsh received the 2012 Tony Award for writing the book for the musical stage adaptation of Once, he told the audience at the Beacon Theatre that:

"Anyone who knows my work knows that it's terribly dark. When I told my friend I was going to take on this delicate little love story, he said 'That's like the equivalent of producers having the stage rights to It's A Wonderful Life and then getting Charles Manson to do it.'" 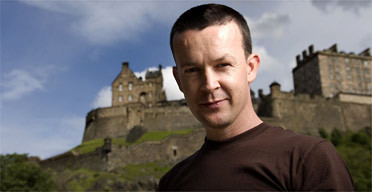 Unlike Anton Chekhov's whiny Three Sisters (or Gilbert & Sullivan's giddy "Three Little Maids From School,") Walsh's trio of bored spinsters is trapped in a tiny Irish fishing village where nothing good -- or even slightly interesting -- ever seems to happen. 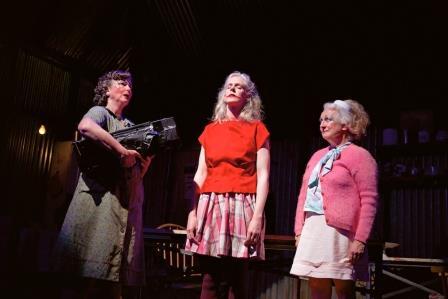 Anne Darragh, Beth Wilmurt, and Trish Mulholland in a
scene from The New Electric Ballroom (Photo by: Pak Han) 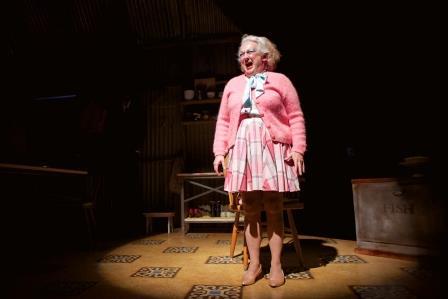 Trish Mulholland as Clara in The New Electric Ballroom
(Photo by: Pak Han)

The only man who visits these women on a regular basis is a fishmonger named Patsy (Kevin Clarke), who has certainly seen better days. Although Patsy usually arrives with a delivery of dead eels that get dumped into a bin marked "Fish" or dropped all over the floor, he is the odd subject of Clara and Breda's warped fantasies. 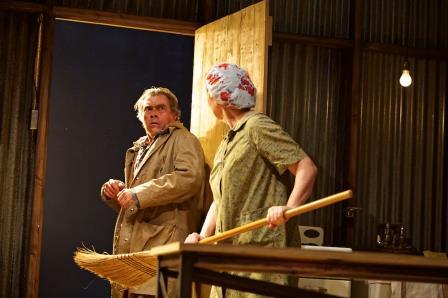 Patsy (Kevin Clarke) and Breda (Anne Darragh) in a
scene from The New Electric Ballroom (Photo by: Pak Han)

One dark day, when even the poetry of doom offers nothing new, Breda decides to seize the bull by the horns and break out of her dismal rut by inviting Patsy in for a surrealistic makeover. As Clara pours water into a tub, Breda starts removing Patsy's clothing until, together with Clara, the two women perform a ritualistic cleansing of the smelly (and mightily confused) fisherman. 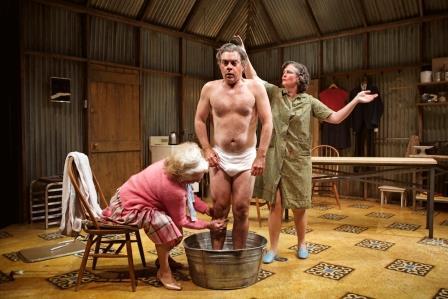 Once he's been cleaned up, Breda dresses Patsy in some tight and shiny pants she's been saving for her special ritual. Soon he is transformed into Roller Doyle, a rocker from her nearly hallucinogenic memory who seductively grinds his hips like a reincarnation of Elvis Presley as he performs atop the sisters' dining room table. 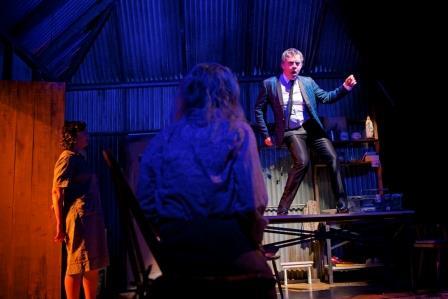 Patsy (Kevin Clarke) struts his stuff in a scene from
The New Electric Ballroom (Photo by: Pak Han)

Bathed in Jim French's ominous lighting, Erik Flatmo's creepy unit set provided a strange framework for a play that begins with a generous helping of inanity and ends with three lipstick-smeared crones stepping over dead eels as they transform the village grunt into the man of their twisted dreams. While Walsh's writing combines a certain amount of fetid wish fulfillment wrapped in poetic babble, The New Electric Ballroom definitely belongs to the genre known as "Theatre of What The Fuck?" As the playwright explains:

"I love the risk factor that a good production demands. It always looks like none of it should work. It's artificial. It could collapse at any minute and then it becomes this suddenly real thing, where themes are flying about in the air, language is splitting apart, and it's just electric. Really, there's nothing better."

Director Barbara Damashek staged Walsh's script as a perverse passion play for three women who have long been terrified of silence. In her program note, she describes it as "a desecration ritual, an anti-mass in which the characters speak to avoid the living."