Growing up in the South, I learned at an early age that talking about money "just wasn't done." How was it that my best friend's parents could afford a new car and an annual trip to Disney World when we had a ten-year-old Ford Taurus and vacationed at a campsite where the most exciting feature was a public pool? You don't discuss such things, I was told. It just isn't polite to talk about money.

If that childhood edict is the case, then Ben Rimalower's most recent one-man show, Bad With Money, isn't just impolite -- it's downright rude. Not only does he talk about money, he confesses to us that he is bad with it. Really bad. 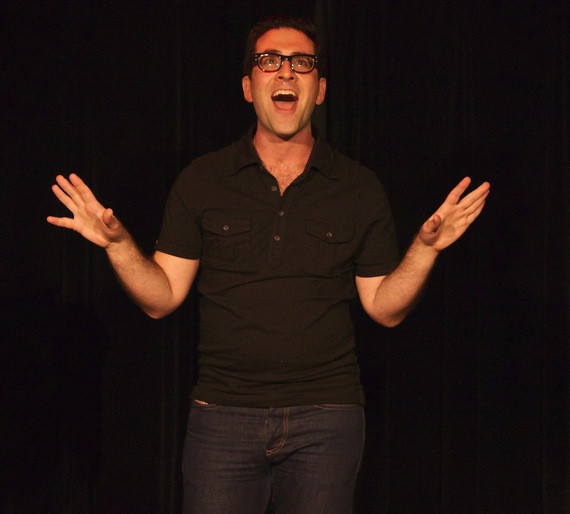 Rimalower opens by singing John Meyer's "I'd Like to Hate Myself in the Morning," a song sung by Judy Garland on The Merv Griffin Show in the last years of her life. Everyone knows about Judy's drug and alcohol problems, he tells us, but very few people understand the crippling debt she faced in those later years:

"There is nothing glamorous about Judy's debilitating financial problems. I never wanted to identify with that aspect of Judy Garland. And yet here we are."

Rimalower then lays out the financial issues that have plagued him throughout his life, beginning at an early age and following him through college at Berkeley, a move to New York, and all the way to the present day. It's not an easy story to hear. And despite the fact that his story includes lies, theft, prostitution and rehab, the most shocking and revelatory part of the show is the openness with which he discusses his finances.

Not just because it's about money, although it's worth thinking about the political ramifications of keeping our finances quiet in an era where the truth about the fiscal irresponsibility of the richest among us and the big banks that support them might lead to an understanding that the poor and middle class are getting the short end of the stick.

But what makes this a powerful piece of theatre is the fact that Rimalower exposes his inner demons right in front of us -- sometimes with great volume and force. It's uncomfortable to see someone lay bare such a painful part of themselves, but he does so with insightful wit and painful self-awareness (helped by Aaron Mark's precise emotional direction). This is the power of Bad With Money -- I'm not sure many of us would be able to stand in front of a crowd and explain our worst failings -- but Rimalower does so with grace, humor, and humility. To his credit, Rimalower doesn't end the show by tying everything up neatly with a bow or coming to any pat conclusions. Instead, we are left with evidence of a struggle, an ongoing sense that we have to keep working at those things that leave us incomplete.

It's clearly moment of catharsis for Rimalower -- you get the sense that he hopes leaving himself emotionally bare under the glaring and harsh lights of the Duplex stage might expose his demons in a way that won't let them take control of his life again. But as he does so, we are also left with hope that we might ourselves be that brave and able to work through our own failures and things that plague us. And as we leave the theatre, we realize that even just acknowledging them at all might be a good start.