And then there were still three. The three declared candidates in the New Orleans mayoral race for 2010 are becoming luckier by the day. State Rep. Karen Carter Peterson just declared that she will not run for mayor next year, following Mitch Landrieu and Arnie Fielkow's similar changes of heart.

With mayoral qualification coming up in just over two months and the primary in four, it's becoming late in the day for a surprise contender. The current declared candidates, Sen. Ed Murray, James Perry of the Greater New Orleans Fair Housing Coalition and Rep. Austin Badon, constitute a relatively small field this late in the game. 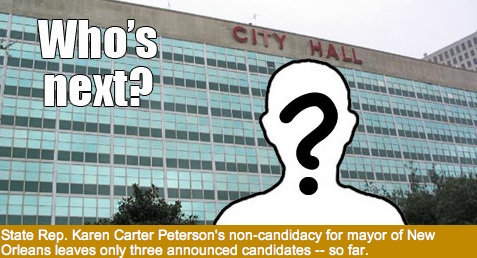 The remaining undeclared candidates could be waiting for an outcry of "Why isn't a _________ (entrepreneur, soccer mom, libertarian, librarian) running?" Surprises notwithstanding, in the months ahead New Orleans will get to know candidates Murray, Perry and Badon in ways that only the glare of a run for mayor of a major American city can reveal.

"I respect State Representative Karen Carter's decision and wish her well on her re-election," Perry commented after learning of her announcement. "I think it's clear to everyone that is the politicians' top-down leadership that has failed all of us and failed us miserably. We need someone who can bring bottom-up leadership, fresh ideas, and a fresh approach to how we do business here in New Orleans. We need to dramatically change the course we are on and we must do so quickly. I don't think anyone really believes the person who's going to do that is a person who helped steer the ship that has gotten us into this mess that we're currently in as a city."

As the candidate who filed for a preliminary injunction against the administration over the hiring of attorneys without City Council approval, Perry is likely out of the running for an endorsement from Mayor Nagin.

"My hope with today's filing of a request for preliminary injunction is that the court will act expeditiously to halt the abuse of power by the Nagin Administration by awarding contracts in violation of the City's Home Rule Charter," Perry said the day the injunction was filed. "The City Charter expressly prohibits any city department or agency with the exception of the Sewerage & Water Board, Civil Service Department, the Public Belt Railroad Commission and the Board of Liquidation from the hiring of special counsel without the approval of two-thirds of the New Orleans City Council."

Perry further described the foundation of his mayoral platform in a Huffington Post op-ed written with his partner, frequent MSNBC Commenter and Princeton Professor Melissa Harris Lacewell HERE. They concluded with:

"The lesson from New Orleans is clear: racial injustice and racialized politics too often stand in the way of doing what is best for the whole community," Perry and Lacewell concluded. "We need both local and national leadership that will stand for fairness for all people while also refusing to misuse historical racial antagonisms for their own purposes. The survival of New Orleans is no longer just about restoring America's most distinctive city. We are all living in Katrina Nation now. Learning the lessons of New Orleans may just have the power to save all of us."