In Part 2 of what with this becomes a three-part review of Landscape Urbanism and its Discontents: Dissimulating the Sustainable City, I discussed the fundamental distinction between a focus on streets and a focus on campuses and other open spaces that distinguishes a built-environment-oriented urbanism (such as New Urbanism) from Landscape Urbanism. This streets/campus dichotomy is not, however, the only distinguishing factor; there is also the distinction between the city and the metropolis.

In the book, urban designer Neal Payton identifies this distinction in his essay, "The Metropolis versus the City." As Payton sees it, while New Urbanists, exemplified by Andrés Duany, Elizabeth Plater-Zyberk and Jeff Speck in their Suburban Nation: The Rise of Sprawl and the Decline of the American Dream, focus on the city and the town and replicating them, Landscape Urbanists, exemplified by the writings of Charles Waldheim, identify their work with the extended metropolis -- the city and its suburbs.

Not that Payton, a New Urbanist, makes a party-line criticism of Landscape Urbanists for their metropolitan focus. He credits both them and his fellow New Urbanists for making radical critiques of contemporary suburban development. They come, however, to their criticisms from differing perspectives, he says, and as a result "argue for different responses."

Payton's view is that the Landscape Urbanists see postwar development for what it was, the "product of the forces of technological and economic modernity," and that they want to work with this reality, including its "automobility" (a word the Landscape Urbanists use). They "make the case for a 'Landscape Urbanism' that is vehicular in its scale yet fundamentally guided by a commitment to environmental restoration."

New Urbanists (and other urbanists), in contrast, emphasize the distinction between city and country. Payton describes this distinction in terms of speeds; the city is slower, down to the speed of walking. In the metropolis, the highway is the most important connector, and highway speeds are the paradigm. This is where Landscape Urbanists, embracing "the Metropolis with its boundlessness and corresponding speed of movement," come up with their concept of "automobility."

Payton argues that Waldheim's and other Landscape Urbanists' push for landscape rather than buildings to become the basis for urban design is highly theoretical and anti-empirical, and to a great extent it's hard to argue with him. Yet Landscape Urbanists would counter that it is they who see the reality -- namely, the speed of the automobile and the conflation of city and countryside in (and as) the metropolis. Payton quotes Lars Lerup (from his 1995 "Stim and Dross" essay that prefigured Landscape Urbanism) as follows: "'[t]he hegemony of the pedestrian, the plaza, the street and the perimeter block must be challenged not because the values they embody are no longer valid, but because they are suffused with a set of fundamental misconceptions about the nature of contemporary civilization and its outside, leading to a false understanding of the whole.'"

As Payton expresses it, in concluding his essay, the metropolis may be destiny, but "an urbanism of streets, spaces and buildings continues to be relevant."

What is missing from this book, and seemingly from any discussion by either Landscape Urbanists or New Urbanists of the future of the metropolis or the city, is any contemplation of the polycentric conurbation that is most representative of what the future of cities will likely be, namely, Los Angeles. (Since "Los Angeles" can refer variously to a city of four million, a county of 10 million, or even a metropolis of amorphous physical (or mental) boundaries, here I'll call it simply, "L.A." (borrowing a usage from William Alexander McClung's Landscapes of Desire: Anglo Mythologies of Los Angeles)).

L.A. was the first automobile-based sprawl city and it is the first post-sprawl city. It baffles urban theorists of all sorts, most of whom choose to wish it away.

L.A. does what great cities do and what only great cities can do: provide a focus and a locus for the creativity -- cultural, intellectual, and economic -- that defines civilization. L.A. sprawls for thousands of square miles, over mountains and deserts; it exists because of landscape-altering infrastructures; it's crisscrossed by freeways and has a weak urban core; it was the first great city to epitomize single-family suburban living. These facts, however, have not prevented L.A. from becoming the world's headquarters for popular culture, a great magnate for industry and trade, and a warm incubator for entrepreneurs and anyone with a dream.

Yet L.A. is post-sprawl. Its automobility reached a dead end decades ago when there was no more room in its (large) core to build more freeways and the compounding of vehicle-miles-traveled resulted in the inevitable logic of latent demand, making further capacity irrelevant to reducing gridlock. Since then L.A has been rebuilding its rail network of a century ago, its core is becoming ever more dense, and residents and businesses increasingly concentrate themselves in defined urban centers (with streets!) that by themselves have economic and cultural activity and resources equivalent to that of mid-sized or larger cities all across America.

If you want to predict the future of all those sprawling cities around the world, why theorize when there is a reality -- L.A. 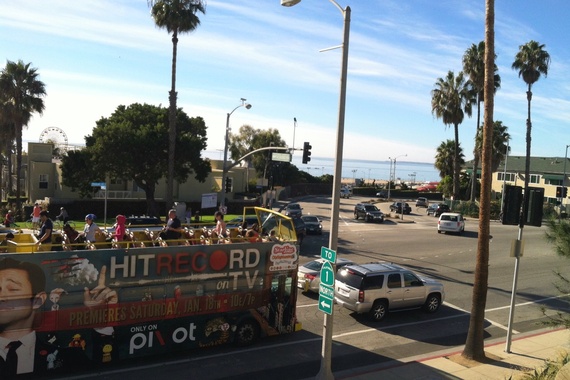