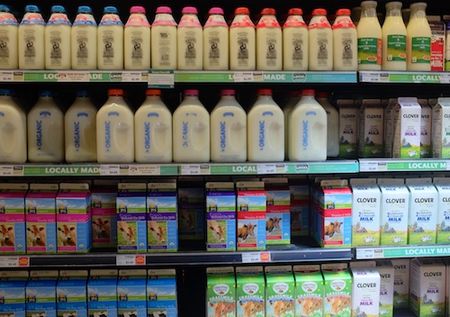 As far as I know there is no such thing as a milk sommelier, but based on the variety of milk available at my local grocery store, perhaps there ought to be. There seem to be more choices now than ever, and that's a good thing, although it can be a bit confusing. Most conventional milk is from Holstein cows but milk from other breeds are also available as well as many non-dairy sources. Here are some of the milk varieties I've found recently and my take on each.

Organic milk: What makes milk organic? Organic milk comes from cows fed organic feed and not given synthetic growth hormones or antibiotics. It's possible that organic milk has higher concentrations of some omega-3 fatty acids and antioxidants, but that's not the only reason to buy it. Organic dairy cows are required to spend time on organic pastures and organic practices are better for the environment too.

Grass milk (a registered trademark): Grass milk sounds like milk made from grass, but it's not. It's the name for milk that's from cows that graze on pasture all year round. Research show it is richer in omega-3 fats, vitamin E, beta-carotene, calcium and conjugated linoleic acid. Recently I got a chance to visit the Regli family Organic Valley dairy farm one of the producers of grass milk in Humboldt county. Some grass milk comes from Holsteins but the Regli's raise beautiful Jersey cows. Organic Valley does not homogenize their grass milk and this month it is being launched nationwide.

Guernsey milk: Guernsey cows produce a richer, sweeter flavored milk with more nutrients than most dairy cows. Guernsey milk has 12% more protein, 30% more cream, 33% more vitamin D, 25% more vitamin A and 15% more calcium than average Holstein milk. It's hard to know which milk cows dairies are using, but sometimes you will see it on the label. Guernsey cows were mostly phased out in favor of Holsteins.

Jersey milk: Locally there is another producer of Jersey milk where I live, St. Benoît. The milk is very rich. Jersey milk contains 18% more protein, 20% more calcium and 25% more butterfat than average milk. Like grass milk it is non-homogenized.

Raw milk: Even more controversial than homogenization is raw milk. It is not even available for purchase in some states. Raw milk is not pasteurized. Some people maintain that pasteurization destroys beneficial bacteria, proteins, and enzymes that aid digestion. However raw milk can harbor dangerous microorganisms that can cause harm including listeria. You can read what the FDA says about raw milk and decide for yourself.

Lactose free milk: Have you ever wondered how milk can be lactose free? Lactose free milk simply contains lactase, a natural enzyme that helps break down lactose. Since many people are lactose intollerant, this enables them to enjoy dairy products with ease.

Goat's milk : Over half of the world's milk consumption is goat's milk. The levels of Alpha s1 Casein in goat's milk are about 89% less than cow's milk which means it's less allergenic. It's naturally homogenized, so the cream does not separate and it has less lactose than cow's milk. More similar to human milk, it's also easier for us to digest.

Soy milk : Soy milk is a controversial form or milk as well. It has less protein than dairy milk and unlike fermented soy products like miso and tofu, it contains "antinutrtients" that actually decrease assimilation of calcium, magnesium, copper, iron and zinc. Drinking it interferes with vitamin absorption as well. There are also concerns about how soy is grown and the chemicals used on it that do damage to the environment.

Rice milk: Rice milk has no saturated fat or cholesterol, but barely any protein. Some rice milk is shelf stable until the package is opened. It's mild flavored and easy to digest.

Almond milk: Although almond milk has calcium, vitamin D, and the antioxidant vitamin E it does not have very much protein. Unsweetened almond milk is naturally low in calories.

I've heard of hemp milk and oat milk, but I've never seen either in my local grocery store. What kind of milk do you drink and why?

The Secret to Stress-Free Weight Loss