Lukas Moodysson is known for his moving cinematic debut, Fucking Amal (1998), which was retitled Show Me Love in English, and Together (2000). The writer and director's latest film, We Are The Best!, is inspired by his wife Coco's autobiographical graphic novel, Never Goodnight, and involves three Swedish teenage girls in the early 1980s who decide to start a band: Bobo, Klara, and Hedvig.

Lukas and Coco have three children--their daughter appeared as Hedvig's little sister in the film--and in our interview, Lukas emphasized the importance of celebrating contrarianism and moments of serendipity at any age. His Tumblr, HIERSEIN IST HERRLICH (It's Glorious Here), functions as paeans to various cultural icons from Miley Cyrus to Marcel Proust. Like a child writing a punishment on the blackboard, his Tumblr features a repeated line from Emily Dickinson: "That it will never come again is what makes life so sweet."

I spoke to the writer and director of one of the best films in the box office right now about punk music, Christianity, and Abba, and the results are below. 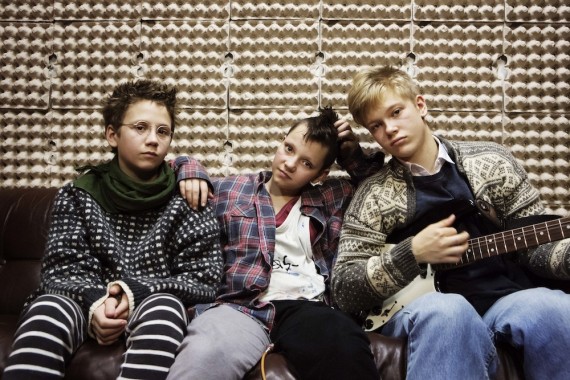 
Kathleen Massara: I'd imagine you've fielded a lot of questions about We Are the Best so far, but what have you not been asked yet?

Lukas Moodysson: What I don't get asked enough about is the really small details, like why did I choose that kind of guitar, because those are the things that interest me about working. I don't have an ideology when I wake up in the morning--I just think: I have to find the perfect guitar for Hedvig.

There was that great moment where the guys at the youth center said that it was a Stratocaster, and then immediately revealed it was an imitation. You could see the girls light up at the brand name, and then get deflated.

It's actually a funny story because it was really important for me to find the right guitar. It's a Tokai, which is almost a Fender, but there was a big fight between the Japanese corporations making copies of Fenders and Gibsons, but they were actually making them more or less better [than the originals]. That's when Fender and Gibson got really angry and sued them, so they're called 'lawsuit guitars'. They're quite expensive now.

Liv [LeMoyne], who plays Hedvig, is really good at playing classical guitar, but she had never touched an electric guitar in her life.

So that was true?

Yeah. So we needed to find a guitar coach for her, to teach her the technique of playing the electric. Well, maybe this is not interesting for you as an American, but someone knew this legendary guitar player, Janne Schaffer -- he played guitar on Abba records -- he's not punk at all, but he's really nice. He came in, and he sat down with Liv and he taught her to play a solo. The two of them went to different music stores in Stockholm and picked that Tokai guitar themselves.

I loved the mansplaining moment where these well-meaning guys at the youth center are trying to teach Hedvig how to play the guitar without first asking her if she knew how to play.

Those guys are from the band Sabotage, who had the song 'Brezhnev-Reagan, Fuck Off'. They knew how to be those guys, because they encountered them growing up. Those guys in real life had to come to the basement to teach the kids how to play their old song. It was a touching moment.

The film addresses the schism between punk and Christianity in the scene at the dinner table. What are your ideas surrounding these two themes, and conformity?

First of all, I think it's interesting to talk a little bit to God or about God in my films, but not as the main theme. I sometimes contemplate making a really religious film, but my faith is not that strong; it's very confused. I just find it important to just talk about it in my work in some way.

The genesis for this in my film is the [Ebba Grön] song 'Hang God', because I remember that when I was growing up. I come from a very non-religious background, but I remember that song was a bit strange. [I had] a childish, naïve feeling--how can they sing about hanging God, because then you have to believe God exists, because otherwise you cannot hang God! That discussion isn't in Coco's graphic novel, but it's something I felt I needed to include. But then it turns into how a subversive movement turns into something that is a very conforming, very simplified worldview, and how it's funny and interesting and good that someone from the outside comes into that group.

Hedvig begins to question everything, just by being there.


She continues to be subversive, but she turns out to be the diplomat, negotiator, and teacher, the one who keeps them together. Maybe it's utopian or idealistic, but I'd like to think that someone from an outside perspective can come in and solve things. It's funny. There's been a lot of different reactions to the religious things in the film.

In its world premiere at the Venice Film Festival people were laughing so much at those parts and I didn't expect that, I thought I'd sneak in a little bit of religious discussion in the film and no one would notice, but in Italy everyone felt it was the funniest part of the film.

Religion in Sweden is not as controversial as in Italy.

But is it as didactic? Catholicism is arguably the metal of religions.

It's a sensitive subject in Sweden as well. For example, I'm in a lot of discussions with my son. I try to let him win, but I'm really bad at that because he's enormously anti-religion and anti-God. Like, I hate all Christians. But his father believes in God just a little bit, at least. He sees religion as oppressive and anti-gay, and conservative and a terrible force involved, he doesn't see anything positive.

But with the new pope, there is this idea that he can be a force of change, especially against rampant capitalism and poverty.

It's not like he has a completely new agenda, of course, but I'm a fan myself. But he always puts the standard really high, so you feel like you're not living the life you really should, especially when talking about poverty in the world, and how Christians should actually act. Even though it's just words, it's important. Don't judge -- it's nice to hear him say that.

One more parenthesis. Liv, who plays Hedwig, is not religious at all, so she struggled when she had to improvise. All that I had to tell her, how there are things in the world you cannot see, like feelings. I used to tease her that we were making this really strong religious film. She didn't laugh.

There's such a gap between the films that are serious and depressing, and happy and stupid. But there are very few films that are happy, and serious, and that's what I've tried to do.

We Are The Best opens June 20th in select cities.