Christian films, or faith-based films, with the exception of Passion of the Christ, share a characteristic I don't like.

Fireproof looks like it was shot in about two days, with the lighting crew borrowed from Days of our Lives.

There Be Dragons is one of those few faith-based films that knows what "cinematic" looks and sounds like. It is photographed by Gabriel Beristain with a clear eye for decadence. Spain, whether it's 1911, or the 1980's, comes alive here. The action sequences and the level of historical detail would make Stanley Kubrick proud.

That's what a $35 million dollar budget gets you.

Scripted and directed by English filmmaker Roland Joffé (The Mission, The Killing Fields), the film treads lightly on its Christian based themes. If someone asked Joffé if this was a religious film, I think he would play coy. It is mostly advertised as a historical epic first, and a faith-based film second.

It's both, sort of. There is an ambitious historical account in here somewhere, but the story is ultimately diluted by the film's greater need to send a message about faith.

The film begins with a text scrawl that gives us a brief Spanish Civil War history lesson. Fascists and communists are fighting for control of the country. We begin in 1911 and span many decades following two characters: Josemaría Escrivá (Charlie Cox), a Spanish priest who was eventually canonized by Pope John Paul II, and Manolo Torres (Wes Bentley), a soldier who left the priesthood and became a spy for the fascist regime. The film is based on a true story, although Torres is fictional.

Both begin in the priesthood and end up leading very different lives. One a product of faith, the other a product of the state. Neither of their characters endure dramatic changes. They serve as pieces of a larger message, to show how dichotomous a life of faith can diverge from a life without it.

Charlie Cox plays Escrivá with the qualities of a general, who doesn't have to step into battle to enjoy the benefits of an army. He has faithful followers who help guide him to safety during the Civil War. Wes Bentley's Manolo by contrast comes off as a spy who's troubled by jealousy and anger. Without faith, he's just stumbling around with a gun. His character is briefly interesting for his infatuation with Ildiko (Olga Kurylenko), a fascist sympathizer, which manifests into jealousy and ends with disturbing consequences.

While it's hard to feel sympathy for Torres, I think Bentley brings just enough to the role so that we at least feel sorry for him. The man is a coward, but at least he admits it.

When trying to judge the film on whether it's a historical epic or a faith-based film, there is a strong tip in favor of the latter. Escrivá is not portrayed with any real faults. I suppose the judgment here is that he was always a saint. But unless I'm wrong here, and I don't think I am, he was also human.

More often than not, watching There Be Dragons feels like you're reading from a pamphlet. One part of the pamphlet venerates Josemaría Escrivá, while the other part of the pamphlet gives a brief history lesson about the Spanish Civil War. If you want an education in either subject, the film is not where you should start.

Some of the film's producers also belong to Opus Dei, the institution that Saint Josemaría Escrivá founded. Opus Dei is never mentioned in the film, but there are references. That could account for the immense budget, which Roland Joffé must have seen as a golden opportunity to make a historical war epic.

The film almost succeeds as one, until Joffé has to tithe the hands that feed him. 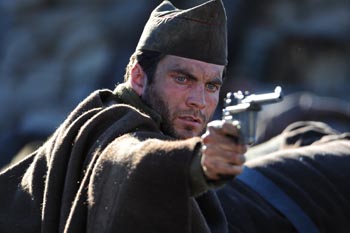 There Be Dragons opens in limited release today.

Richard Karpala: Can you talk a little about how you got involved with the film?

Wes Bentley: I got the script and it was at a time when nobody was making movies. It was right after the economic collapse. I was just hoping it would be a good job. I get the script and it says Roland Joffe on it. I got to go meet with him and I've been a fan of his since The Mission, it was a huge film for my family. So I was excited to meet him, we had a great meeting and connected right away. I feel like it was a miracle they had the budget they did. So we got to go make a movie and it was great.

What was the budget?

There's lots of special effects to account for it. And you're in make up for part of the film. Could you describe the process of playing a 78-year-old version of yourself?

It was the hardest thing to do as an actor. It took a lot of preparation. A lot of body work. There was a movement teacher that came to work with me. He was 78-years-old himself but he moved like he was 60 [laughs]. So he had to work on it with me. I had to do a lot of research about Spain in the 20th century, because where Manolo drops off from the 30s to the 80s, I had to fill a whole life there. And that was where I found the most important part of preparing for him as an old man, was all the things that happened to him in his life, and piling that on his soul, which in turn affected his body.

I basically did something I don't do, which is stay in character all day. Roland had everyone refer to me as "Mr Torres" and treat it like it was a documentary being filmed at my house. But I needed that, it was hard to stay there the whole time. It was challenging but also rewarding.

You play a fascist spy, I don't know if you're painted as the most sympathetic character. How would you describe Manolo?

Yeah, he makes a lot of bad choices, and is a cold person. You have to play it without judgment yourself, just approach him with his pre-conditions and what affected that in his life. There would be a lot of stories like his if we explored the war. It's such a chaotic bloody war. There was a lot of backstabbing. Manolo is also a metaphor for the choices we make in our life. Manolo and Josemaria being two sides of the same coin. Showing one maintaining his calling while the other fell into all the pits and traps of something chaotic as the Spanish Civil War.

I wasn't very familiar with the Spanish Civil War. I did a little research on it, since this is based on a true story -- was Manolo based on a true character or written for the film?

Manolo is a fictional character but I also heard he's a culmination of a few people in Josemaria's life. For the purpose of the film he was drawn into one particular character.

Was it hard to sustain a Spanish accent?

The accent was a tricky one. We had so many characters from all over the world. American, English, Scottish, Brazilian, Spanish and Argentinean all trying to fit into the same accent. [laughs] So at one point, we were like, "should we even do an accent?" But then we realized we had to. With Argentinean and Spanish there, and us without one? So we tried to find an accent that doesn't really exist. It's not really a Spanish accent. We don't want to play it like someone struggling with a language. But rather speaking their language. But we needed the accent so as to not really jar the audience.

We all shared one dialect coach. He was a busy man.

Did you have a background in Catholicism?

Both my parents are Methodist preachers, I grew up in a church. I literally grew up in churches. Then my extended family, there are preachers and evangelists, former priests. So I have quite a bit of history with Church, religion and spirituality. But now I don't go to church. I still consider myself a very spiritual person but the structure of the church isn't really for me.