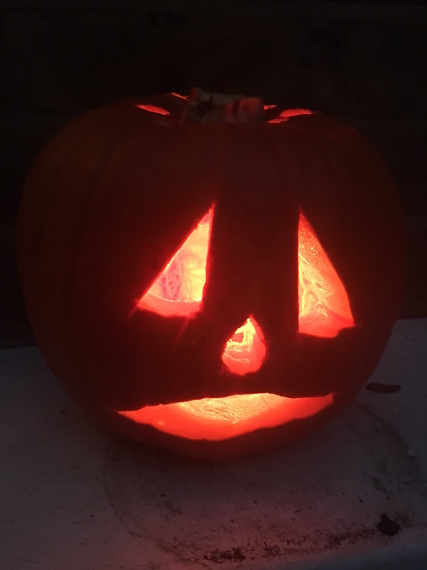 This is a scary Halloween story from long ago involving a bunch of kids known as....the Little Neckers.

Right about now a chill will be running down your spine if you're gray at the temples and you grew up where I did on the edge of Queens, in a sweet neighborhood called Douglaston.

Little Neck was our neighboring town, and every time there was any kind of mischief in Douglaston, we blamed the Little Neckers - right or wrong.

A broken street light? Tire tracks across somebody's lawn? It couldn't have been any of us!

It was those damn Little Neckers, officer!

Little Neckers could be tough. They smoked cigarettes and leaned on the fenders of cars that didn't belong to them. They took the Lord's name in vain.

We took His name in vain too, but they did it with a lot more style, and I don't think they worried about eternal damnation. In the afterlife I imagined I'd see Little Neckers leaning on the Pearly Gates, bumming smokes from St. Peter.

Until then, they liked hanging out at the Howard Johnson's parking lot on Northern Boulevard, daring people to make eye contact.

Hey, what are you lookin' at? You took your life in your hands going to HoJo's for a fried clam sandwich.

Okay, that's an exaggeration. Little Neck was a sweet neighborhood, too. This wasn't West Side Story. We were the Sharks and the Jets, Lite.

But the rivalry was there.

We had the same artillery but a lot fewer people, and it wasn't going well for us.
One bold Douglaston girl from my class opened her door to yell at them, and quickly closed it in time to avoid being pelted by half a dozen eggs.

We were losing our neighborhood! We needed a miracle!

And here came the miracle, in the form of a skinny, spirited Douglaston boy who must have made a trip to Chinatown to get what he pulled from his pocket - the biggest firecracker I'd ever seen.

He broke from our retreating crowd, calmly lit it and tossed it toward the advancing Little Neckers.

What an explosion, ten feet in front of them! It didn't hurt anybody but it rocked the night, and the Little Neckers scattered.

So did we, at the sound of an approaching police siren. I ran all the way home, breathing hard as I plunged through the back door.

"Did you have a good time?" my mother asked.

"Great," I said. That was the truth. I was stoked. Fleeing from the cops! What a night! Who said Queens was boring?

"Hey, you didn't get any candy," my mother said.

She thought I'd been trick-or-treating. Mothers always think you're a little younger than you actually are.

I never did tell her what really happened on that crazy night 46 years ago, until now. (Hi, Mom!)

And I realize now how lucky we all were to get through it unharmed. Our mothers washed eggs and shaving cream from our clothes, and the damage was undone. I saw some Little Neckers at school the next day and we all had a good laugh about it. No hard feelings.

Anyway, that was a long time ago, and of course everything has changed. That orange-roofed Howard Johnson's where the Little Neckers hung out is long gone. Seems to me that the art of hanging out is gone, too.

Kids would rather stay inside these days, for the better reception. Everybody lives in the same wretched neighborhood now, and it's called the Internet.

But old habits die hard. I now live an ocean away from Douglaston, and the other day I saw a smashed jack-o'-lantern on the street. A crime for which I had just four words.

Charlie Carillo is a TV producer and a novelist. His website is www.charliecarillo.co.
(Jack-o'lantern photo courtesy of Catherine Allen)