As I walked along the beach hand in hand with my six year old daughter, we scanned the sand beneath our feet in search of interesting seashells.

"Look at this one, Mommy," she said as she bent over to pick one up.

"I see, but that one is broken," I responded. "Put it down and let's look for a better one."

"What about this one, Mommy?" she asked, again picking up a broken shell.

Along the way, we did find some unbroken shells. We marveled at them and dropped them in our bucket as we walked. However, my sweet daughter continued to pick up some shell fragments as well.

Eventually, she excitedly held one up for me to see. "Mommy! Look! I know it's broken, but it has purple on it and purple is your favorite color! See? It's still pretty since it has purple, right?"

Through the eyes of my child, I finally saw the beauty in the broken shells. 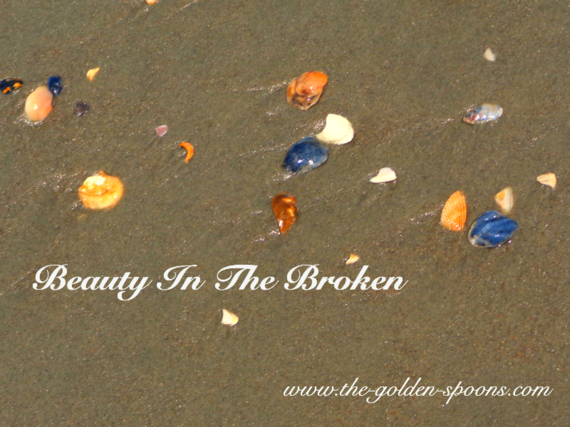 I thought about all those shells had been through before they ended up there on the beach under our feet. They had been, perhaps, a home to some sea creature, eventually abandoned and discarded. They had traveled untold miles, tossed around among the waves. They had grown and changed and become mere pieces of what they once were. The tossing had shattered them, but it also had polished them. Eventually, they had come to rest right there in that spot, decorating the sand like confetti scattered about on the floor of a party and the beach would not have been the same without them. Their journey had ended beneath my toes and in the fingers of my sweet little girl.  While she was fascinated, I had discounted them as broken and useless. She made me realize that, even in their brokenness, those delicate shells still had something to offer.

It seems to me that people are often like those seashells. We travel great distances, both figurative and literal. Along the way, we get beaten and bruised; injured and scarred. Some of us end up more broken than others.

Just like those shells, though, we still have something beautiful to give. We have talents and gifts that are unique to each of us. Sometimes, they are difficult to see, but they shine through the jagged cracks when we let them and when we make an effort to see them.

As I looked at those shells with the fresh perspective my daughter had given me, I was reminded that there is beauty to be found in the broken. There are stories, fears, hopes, and dreams. They are there, in pieces and fragments, among the divots and crevices. Often, we just need to adjust our lens a bit so we can see them more clearly and appreciate them more fully.

Lisa Witherspoon is a wife, mother, and blogger. She writes about the joys, frustrations, chaos, and laughter of motherhood on her blog The Golden Spoons. You can also connect with her on Facebook and Twitter.