DeSmog has uncovered Exxon corporate documents from the late 1970s stating unequivocally “there is no doubt” that CO2 from the burning of fossil fuels was a growing “problem” well understood within the company.

“It is assumed that the major contributors of CO2 are the burning of fossil fuels... There is no doubt that increases in fossil fuel usage and decreases of forest cover are aggravating the potential problem of increased CO2 in the atmosphere. Technology exists to remove CO2 from stack gases but removal of only 50% of the CO2 would double the cost of power generation." [emphasis added]

Those lines appeared in a 1980 report, “Review of Environmental Protection Activities for 1978-1979,” produced by Imperial Oil, Exxon’s Canadian subsidiary.

A distribution list included with the report indicates that it was disseminated to managers across Exxon’s international corporate offices, including in Europe. 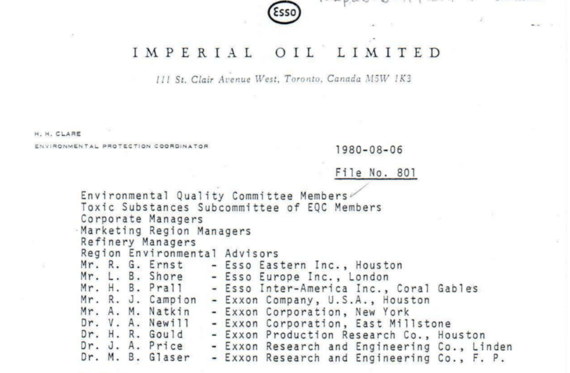 The next report in the series, “Review of Environmental Protection Activities for 1980-81,” noted in an appendix covering “Key Environmental Affairs Issues and Concerns” that: CO2 / GREENHOUSE EFFECT RECEIVING INCREASED MEDIA ATTENTION.

InsideClimate News unveiled much new information in its Exxon: The Road Not Taken series clearly demonstrating the depth of climate science knowledge among Exxon’s U.S. operations. Additional revelations about the company's early climate research were published by the Los Angeles Times in collaboration with the Columbia School of Journalism.

“CO2 Greenhouse Effect:  Exxon-supported work is already underway to help define the seriousness of this problem. Such information is needed to assess the implications for future fossil fuel use. Government funding will be sought to expand the use of Exxon tankers in determining the capacity of the ocean to store CO2."

Now DeSmog’s research confirms that the knowledge of the carbon dioxide pollution threat was indeed global across Exxon’s worldwide operations, earlier than previously known, and considered a major challenge for the company’s future operations. The new documents revealed today were found by DeSmog researchers in an Imperial Oil (TSE:IMO) archival collection housed at the Glenbow Museum in Calgary, Alberta. We first learned of the existence of the collection in one of the articles published in the Los Angeles Times in collaboration with the Columbia School of Journalism.

A document discovered by DeSmog reveals that Exxon was aware as early as the late 1960s that global emissions of CO2 from combustion was a chief pollution concern affecting global ecology.
Those details were found in a 1970 report, “Pollution Is Everybody’s Business,” authored by H.R. Holland, a Chemical Engineer responsible for environmental protection in Imperial Oil’s engineering division. [click to download PDF of "Pollution is Everybody's Business]

“Since pollution means disaster to the affected species, the only satisfactory course of action is to prevent it -- to maintain the addition of foreign matter at such levels that it can be diluted, assimilated or destroyed by natural processes -- to protect man’s environment from man.”

Included in Holland's report is a table of the "Estimated Global Emissions of Some Air Pollutants." One of those "air pollutants" on the table is carbon dioxide with the listed sources as "oxidation of plant and animal matter" and "combustion." 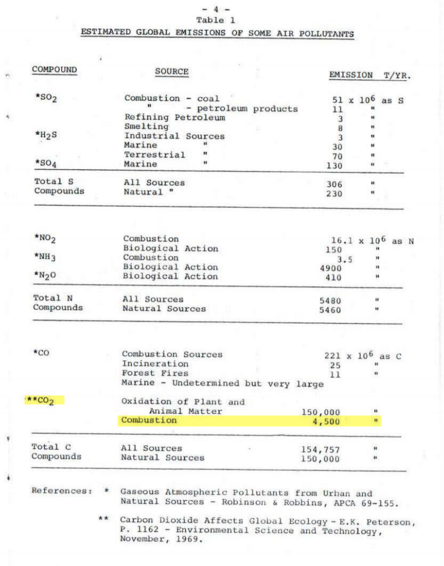 The double asterisks beside CO2 in Holland's list of pollutants refer to a citation for a 1969 scientific study, “Carbon Dioxide Affects Global Ecology,” in which the author explains the connections between the burning of fossil fuels, the rise in CO2 in the atmosphere and the potential effects this will have on future weather patterns and global temperatures.

Holland emphasized the need to control all forms of pollution through regulatory action, noting that “a problem of such size, complexity and importance cannot be dealt with on a voluntary basis.” Yet the fossil fuel industry has long argued that its voluntary programs are sufficient, and that regulations are unneeded.
Advertisement

Despite Exxon’s advanced scientific understanding of the role of CO2 pollution from fossil fuel burning causing atmospheric disruption, the company shelved its internal concerns and launched a sophisticated, global campaign to sow doubt and create public distrust of climate science. This included extensive lobbying and advertising activities, publishing weekly op-eds in The New York Times for years, and other tactics.

Exxon and Mobil were both founding members of the Global Climate Coalition, an industry front group created in 1989 to sow doubt — despite the GCC's internal understanding of the certainty.

While the GCC distributed a "backgrounder" to politicians and media in the early 1990s claiming “The role of greenhouse gases in climate change is not well understood,” a 1995 GCC internal memo drafted by Mobil Oil (which merged with Exxon in 1998) stated that: “The scientific basis for the Greenhouse Effect and the potential impact of human emissions of greenhouse gases such as CO2 on climate is well established and cannot be denied.”

And the most obvious evidence of Exxon’s pervasive efforts to attack science and pollution control regulations lies in the more than $30 million traced by Greenpeace researchers to several dozen think tanks and front groups working to confuse the public about the need to curb CO2 pollution.

Advertisement
Imperial Oil, Exxon's Canadian subsidiary, as these documents demonstrate, had a clear understanding of the environmental and climate consequences of CO2 pollution from fossil fuel combution, yet its public denial of these links grew stronger throughout the 1990s.
Imperial Oil chairman and CEO Robert Peterson wrote in "A Cleaner Canada" in 1998: "Carbon dioxide is not a pollutant but an essential ingredient of life on this planet." 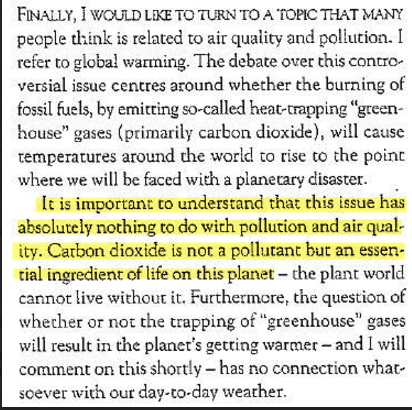 (DeSmog will take a deeper look at Imperial Oil's conflicting CO2 positioning in public vs. its internal communications in future coverage.)

"Your conclusions are inaccurate but not surprising since you work with extreme environmental activists who are paying for fake journalism to misrepresent ExxonMobil’s nearly 40-year history of climate research. To suggest that we had reached definitive conclusions, decades before the world’s experts and while climate science was in an early stage of development, is not credible."

Legal Implications of Fossil Fuel Industry’s Knowledge of CO2 Pollution and Climate Impacts
Calls are growing louder to hold Exxon and other fossil fuel interests accountable for funding climate denial campaigns given their advanced understanding of climate science and the implications of CO2 pollution for the atmosphere going back many decades.

In multiple U.S. states and territories — including New York, California, Massachusetts and the Virgin Islands — state Attorneys General are investigating Exxon’s depth of knowledge regarding the climate impacts of burning fossil fuels, and whether the company broke the law by fueling anti-science campaigns through corporate contributions to organizations and individuals working to sow doubt and confusion about global warming. [DeSmog coverage: State Investigations Into What Exxon Knew Double, and Exxon Gets Defensive]

Climate activists and even presidential candidate Hillary Clinton are urging the Department of Justice and other relevant government agencies to investigate the fossil fuel industry’s deliberate efforts to delay policy action to address the climate threat.

Democratic U.S. Senators Sheldon Whitehouse (RI), Ed Markey (MA) and Brian Schatz (HI) introduced an amendment to the energy bill expressing Congress’s disapproval of the use of industry-funded think tanks and misinformation tactics aimed at sowing doubt about climate change science. But it remains to be seen what action Congress might take to hold the fossil fuel industry accountable for delaying policy solutions and confusing the public on this critical issue.

Imagine where the world would be had Exxon continued to pursue and embrace its advanced scientific understanding of climate change decades ago, rather than pivoting antagonistically against the science by funding decades of denial?