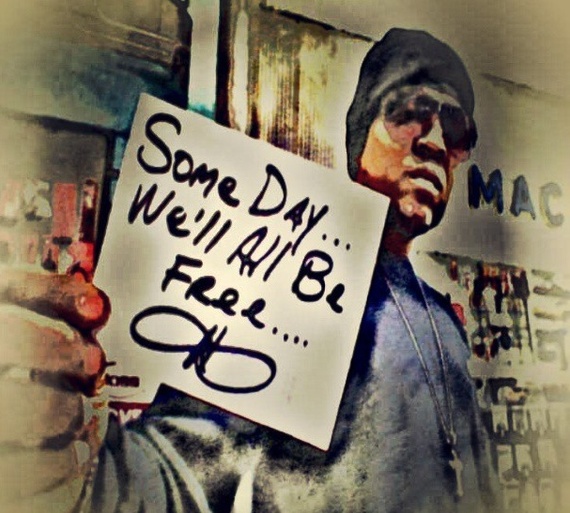 Laquan McDonald was killed in cold blood by a Chicago police officer on October 20, 2014. And, the murder was covered up until a court order demanded release of the police dash cam video on November 19,2015. Why did it take a year, court order and public outrage for Laquan McDonald's life to matter? Why didn't the police officers who lied to protect Jason Van Dyke care enough to tell the truth? Perhaps Van Dyke mattered more to them because he was their "own kind". Aren't we more than our basic drives and instincts for survival? We are all "humankind".

Chicago is just one example of the toll racism and prejudice have taken on humankind globally. The world is exploding. Without justice, there can be no peace. A year after Laquan's murder on October 9, 2015, just thirty miles from Chicago, the Gary International Black Film Festival screened The Black Panthers: Vanguard of the Revolution to a packed house at Indiana University Northwest. The following day Minister Luis Farrakhan led the 20th anniversary of the Million Man March with the call, "Justice or Else" in Washington, DC. Over 50 years after the civil rights movement and Black Panther revolution, why does justice elude people of color?

The struggle continues because crimes against humanity have yet to be addressed. There is no justice until they are. How can government address the ravages of the African slave trade and colonization of North and South America, Africa and most of the world, which forced people to relinquish their cultural identity, land, language and traditions? Reparations for the African slave trade alone could cost up to $14 trillion. And that's just for the free labor. How do you repay the loss of identity, rape of women, destruction of families, and breeding of men? We have never recovered from these crimes against humanity. Blacks in America suffer from high rates of depression, anxiety and Post-traumatic Stress Disorder. And the descendants of slave owners have a legacy of wealth, while the legacy of descendants of slaves is poverty and violence. Our global government, economic, justice, and education systems were built by European male world domination, so the legacy of institutionalized racism and prejudice continues. And although slavery was abolished in 1865, it never stopped. Human trafficking is a $32 billion industry. As long as greedy, heartless people profit from slavery, it will always exist. Right the wrongs.

Here are my suggestions for reparations:

1. Bring criminal charges against former slave owners who raped, murdered and breeded people. They may be deceased, but it needs to go on record that they committed crimes against humanity. Africans were considered 3/5 human and the current police murders of black young men and women sends the message that this is true. Prove that African and black people are 100% human just like everyone else by charging and sentencing their murderers and rapists.

2. Rewrite the constitution. Revisit national, state and local laws and abolish all that are based on racism and prejudice. Include all races and genders in the process.

3. Tell the truth. Rewrite history books (including religious history books) and teach all children the truth. Include the truth from all perspectives, not just the European perspective. Include African, Latino, Hispanic, Indian, Asian, Middle Eastern history. Include the truth about these beautiful cultures. Include all religions, not just Christianity. Include all genders, not just the male, patriarchal historical perspective. We have been lied to in order to accept oppression and it is time that all truth is revealed at all levels. All children deserve to see beauty and greatness in themselves.

4. End discrimination in all its forms. Jim Crow laws and lynching continued to keep blacks in chains after slavery was abolished and Black Wall Street , which had a thriving economy, was burned to the ground. Divisive tactics were used by the FBI and other organizations to circumvent any attempts to rise. And modern day discrimination occurs in public housing and gentrified communities. Discrimination also continues to thrive in real estate, business and education. For example, largely black and Latino communities are targeted by scam educational institutions that capitalize on their hopes and dreams of a better life offering bogus degrees and certificates that are not marketable.

5. Share power. Ensure that all groups are represented in every level of decision-making in government, economic, justice, religion, and education systems. Like all lives matter, all perspectives matter. True diversity (not just a trendy term) is beautiful and different ways of life are not a threat to anyone's existence. People of different cultures and religions are not savage or inferior. There will never be justice and equality where only one group dominates.

6. Share resources. End the rule of colonists globally and return the original inhabitants' land and way of life. Natural ways of living will restore the natural balance and flow of natural resources. No one should be filthy rich and no one should be dirt poor. People will live in peace and harmony instead of fighting and competing for land and resources.

The solutions I propose may sound like Utopia, but look at the alternative. If we continue on our current path, it will lead to all our destruction. You may not care because you are not personally affected. We all are personally affected by the crimes of our ancestors. In order for humanity to evolve, we must right the wrongs of our ancestors. Show the world that all lives matter. There is no justice until we all are free.

What do you think are fair reparations for descendants of African slaves? Please post your thoughts in the comments.