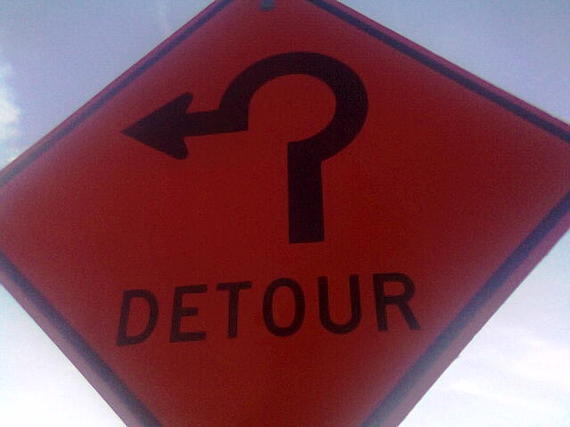 photo by Chris Dlugosz
I was recently working on a deal with Costco to have my book sold in their stores. At the last minute, the deal fell through. I won't bore you with the details, but I worked very hard for the better part of a year until it was beyond my control and there was little I could do but watch the green light turn yellow and then sadly, red.

For months leading up to this, I was excited with anticipation. January would be the month the book would debut at Costco. This marketing coup, I had envisioned, would be the answer to this indie author's dreams. So when I found out about this change in direction, I was very surprised by my reaction. I didn't feel awful. Okay, I did feel awful, but I wasn't devastated.

Maybe it's because I've recently come to believe that there is no such thing as failure, really. Yes, while rejection, mistakes and unfulfilled goals are very disappointing, they are not Failures and they should not be perceived as Stop signs. They are merely Detour signs. Life's way of saying, find another way to succeed. Did you fail to win a new client's business, get in to your top college choice, get a publishing deal, a promotion, a dream job? There is a difference between when an objective fails to happen and Failure. Adopting this mindset is powerful. The very thing about failure that's so painful is that it makes us feel weak. It makes us turn inward and feel badly about ourselves. It pricks a hole in our balloon of confidence.

Instead, if we look at the experience we've garnered and truly value the work we've done (which is an achievement itself) and the direction it's taken us, as a detour, it gives us the license for contemplation. It allows us to regroup, reassess, redirect, and pursue recourse with confidence and positive energy. Maybe it's the same goal that will now be attempted with a different strategy. Isn't that powerful? Yes.

I recently read The New York Times article, How to Cultivate the Art of Serendipity. It noted that, "A surprising number of the conveniences of modern life were invented when someone stumbled upon a discovery or capitalized on an accident . . . many blockbuster drugs of the 20th century emerged because a lab worker picked up on the "wrong" information."

It went on to ask, "So how many big ideas emerge from spills, crashes, failed experiments and blind stabs? Thousands of inventors reported that their idea evolved when they were working on an unrelated project -- and often when they weren't even trying to invent anything. This is why we need to know far more about the habits that transform a mistake into a breakthrough."

In a world that prizes how fast something can be done, we are no longer allowing ourselves to sit in the middle of a mistake or a failed attempt and mull it over, view it differently, or to even make a mistake at all. We all know people who have worked for years toward a certain goal, only to give up when it hasn't come to fruition and become disgruntled or depressed because they view themselves as a failure. But what if instead, we could view this course of action as leading to something else, not as a dead end because it didn't lead to what was intended? By adopting this mindset we are no longer a passive victim of failure. Instead we are active in valuing the course, work, dedication and experience, and wise to direct it elsewhere.

Eva Lesko Natiello is the award winning author of the bestselling psychological thriller, THE MEMORY BOX, about a woman who Googles herself and discovers the shocking details of a past she doesn't remember.