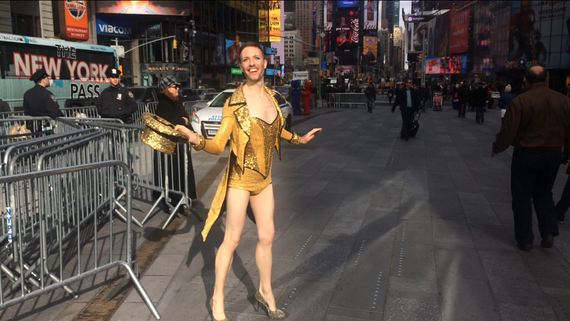 There is nothing wrong with me (and it only took 37 years to figure that out).

I knew it was time to come out when I was 11-years-old. I had been secretly dancing around dressed as Wonder Woman in our rural Pennsylvania barn. I was savoring every solitary moment, belting out the hits of Bette Midler's debut album, The Divine Miss M. When the time came to tell my mother, I pictured myself triumphantly saying, "I have an announcement: I'm from Planet Spectacular! I have come to take over and rule, with Scott Bakula by my side!" All I could muster, though, in a creaking, changing voice, was a stammer that sounded something like "I think I like boys." There were a million more hidden, stuffed and shamed parts of my story, but that tiny sentence would have to do for then.

Mom hit the brakes. I was scared. She was scared. We were driving home from church; I couldn't tell if my timing was impeccable or exceedingly unfortunate. She swerved off the road, perhaps with God on her mind (she is, after all, a Lutheran Pastor): "You can't say that! You're 11 years old. You don't know anything about that!" It would take two more messy "coming outs" and seven more years of stammering to finally tell Mom the whole truth.

Let me be clear: Mom loves me. My mother is a hero, my hero. She has always fought for me. She is one of the strongest, smartest people on the planet. And she was told that who I am, how I expressed my gender, was her fault. She was told that this child she loves would lead a disease-riddled, psychologically-disturbed shell of a life.

With each video I make, I hope to give people, including parents, additional tools. I make silly, happy Vines and sincere, touching Vines, all trying to show the humanity of someone who is different. Sure, on one level it's clear that I'm helping LGBT teens face the school bully with pride; but also, in my clearest moments, I realize I'm also trying to put together my own pieces. Every six second video I create is a time machine, extending a compassionate hand to 11-year-old me. "It's ok to come out now, you can be happy now", says the "now" me.

Today, I dress like Wonder Woman as my life's work. Several times a week I'm making glam music videos and sending out little messages of self-worth for my hundreds of thousands of followers. I love interacting with all kinds of people online. Messaging with folks that wouldn't normally "get it" excites me the most. It proves that we're all more alike than we often admit. Everyone seems to be drawn to my message of "there is nothing wrong with you."

I am often head over (stiletto) heels happy when someone doesn't even think about my gender identity; they just look at my videos and see themselves reflected back. Most of the time, people aren't even looking past my gender identity, the fun and openness are undeniable; they're just connecting.

Labels are important to a lot of people. I'd go so far as to say they're even useful much of the time. But when a label or political stance separates me or isolates me from others, it also saddens me. Maybe I'm still coming out, still becoming, still creating this life, and I'll need to teach Mom more truths for years to come.

Anyone who wants to join me in sharing our truth is most welcome.