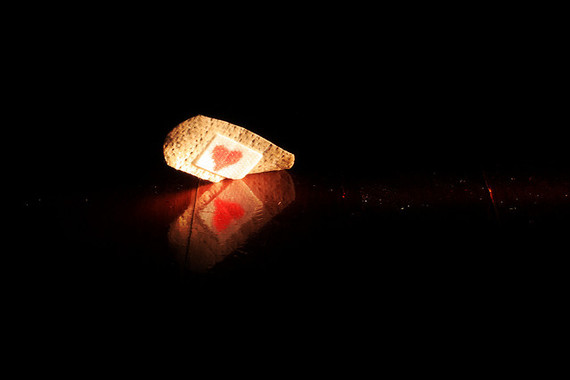 I'm sure all of us cut ourselves at some point during our childhood, and the first thing we did was rush directly to our mothers for help. She may have addressed this seemingly devastating trauma with a quick examination followed by soap and water, some calm reassuring words, a warm embrace, and then a Band-Aid. At that moment, the pain very likely went away... and you "felt" better.

What you experienced was likely your first conscious experience of the placebo response. Here is why.

The moment you correlated a change in your inner chemical world (you felt better, the pain diminished and you were no longer fearful or emotionally upset) with your outer world (the trauma, the cut on the surface of your skin and the profound maternal ritual followed by the magic touch of the Band-Aid) you created an associative memory and thus, a conditioned response. One of the most important elements that work to create the placebo response is conditioning.

It's your senses that write the story in your mind. Hearing your mother's voice, feeling her touch, smelling her perfume, and seeing her face was enough stimulation for you to accept, believe, and surrender to the idea that you would be fine. This process caused your autonomic nervous system to release certain chemicals to help you feel better and the healing process began.

Your body already naturally possesses the innate ability to heal itself from minor cuts and abrasions. But the moment you began to feel better, you looked down at the Band-Aid covering your injury, thinking that it was the Band-Aid that created your healing. As the Band-Aid hid the injury, it took more of your attention off of the cut, which helped you to feel even better because you no longer saw the blood. Out of sight, is out of mind. So you related the relief from the pain and the fear of bleeding to death with a strip of pink adhesive and some cloth.

Your reaction created a conditioned response and you learned over time that when you cut yourself or had a small injury that a Band-Aid was the solution. In fact, every time you got a cut, you probably "thought" of the Band-Aid as the answer to heal you. It's highly possible that the moment you were given a Band Aid your body was conditioned to make the same calming, healing chemicals as the last time. Therefore, all conditioned responses come from past experiences. Simply said, conditioning is based on the past.

The main idea behind expectancy is that a person's mental state can impact a person's future health. To illustrate this point, let's look at a study done by researchers at the Downstate Medical Center in Brooklyn, New York.

A group of 20 asthma suffers were given two medications. The first, isoproterenol, when inhaled is used to open the bronchial tubes, thus creating more oxygen in the lungs. The second, carbachol, when inhaled does the opposite -- it constricts the bronchial tubes and decreases oxygen flow in the lungs. The interesting part of this experiment is what happened when subjects were given carbachol but were told it was isoproterenol. The bronchial constrictor should have decreased airflow in all of the subjects because that's how carbachol biochemically works in the human body.

But that's not what transpired. Five of the subjects showed increased airflow instead of decreased airflow. How did this happen? Carbachol should have made it harder to breathe not easier. Quite simply, the expectation of healing changed the outcome.

Think about the implications of this study from a biological standpoint. As the five subjects expected the drug to dilate their bronchioles, the thought of the inhaler working to increase airflow was greater than the chemical effects of the drug, which should have caused the lungs to constrict. That's how powerful a thought can be when we are expecting a specific outcome.

Once the drug was administered and the subjects accepted, believed, and surrendered to the idea that it was something else, the brain responded by releasing chemicals associated with healing. The five subjects made their own pharmacy of anti-histamines and bronchial dilators by thought alone. In this case their thoughts were stronger than the powerful effects of the drug.

The placebo in the form of an asthma medication represented a possible future potential. When certain subjects married the thought of getting better -- that's called a clear intention -- with the expectation of being better, it was as if their brain and body were living in that future reality in the present moment. The body as the unconscious mind does not know the difference between the actual experience in our outer reality and how we think and feel in the inner reality. The brain and body were primed to believe the medication they were receiving would help...and it did!

Here is where we run into trouble. When conditioning and expectation function simultaneously, then we always try to predict our future based on past conditions. As a result, the brain and body are already in the same future based on the past and we get caught in a continuous loop. When this happens everything stays the same, including our biology.

Given what we just learned, is it possible that we can unconsciously expect pain or illness to be present today because it was there yesterday? If so, could that mean that the thought of expecting to be ill is greater than the very drug or treatment we are using to the degree that our mind overrides the benefits of any biochemical change in our body?

But when we change our state of being -- that is, how we think and feel -- to expect the unexpected, the unknown, or some new future outcome, then our brain and body can magically change, just like using a Band-Aid. Try it out!

Creative Commons Time Heals All Wounds by Neal Fowler is licensed under CC 2.0

US Presidential Election 2020
Breaking news, analysis and the latest polls on the presidential race from HuffPost’s politics team
See More
Voting Made Easy
Register to vote and apply for an absentee ballot today
Register now
More:
healthy livingplaceboHealth
Newsletter Sign Up
The essential guide to taking care of your mind and body
Subscribe to HuffPost’s wellness email
Successfully Subscribed!
Wellness delivered to your inbox