"Walls for the wind,
And a roof for the rain,
And drinks beside the fire -
Laughter to cheer you
And those you love near you,
And all that your heart may desire!"
- Irish Blessing

In many ways, it was like a scene right out of a movie. We had entered into a small local pub, tired and hungry from a long day of traveling in the cold, rainy winds of an Irish November. We had stumbled blindly through the dark, a five-minute walk from our hotel along a narrow, winding road set amidst rolling hills.

There were just two other people in the pub, visitors, like us, evidenced by the large, worn backpacks towering next to their table. The bartender greeted us warmly and we asked if he had a menu for food.

"We do, but the kitchen is about to close," he said. "We only have homemade beef stew and seafood chowder." We ordered one of each, two pints of Guinness and sat down at a tableside fire for what was to be one of the most memorable stops on our two-week long journey. 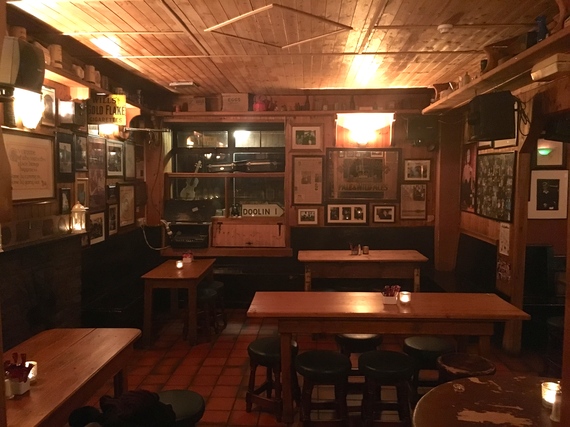 Situated on the west coast of Ireland, and nestled just a sort distance from the Cliffs of Moher - Ireland's most visited natural attraction - Doolin has become world renowned for its traditional Irish music, attracting thousands of international visitors each year. A seaside village with a population of just 500 people, its rustic landscape makes for a cozy, tranquil getaway, particularly in the off season, and even in the harsh, whipping winds of winter.

But, one needn't be there long to fully understand its appeal. Its most distinguishing feature can be found by stepping foot in a local shop, restaurant, hotel or pub - as we did into McGann's that first night (and as we would for the following two nights) - and witnessing a most authentic display of Irish hospitality that seems to reveal itself more naturally in the Irish countryside.

Indeed, having arrived in Doolin after spending three days in Dublin, we were reminded of what some might call a universal principle of traveling: that the most authentic experiences are often found not in the lights and glamour of a city center, but in rural encounters with lifelong natives whose customs and behaviors portray a more accurate reflection of the people and character of a country. 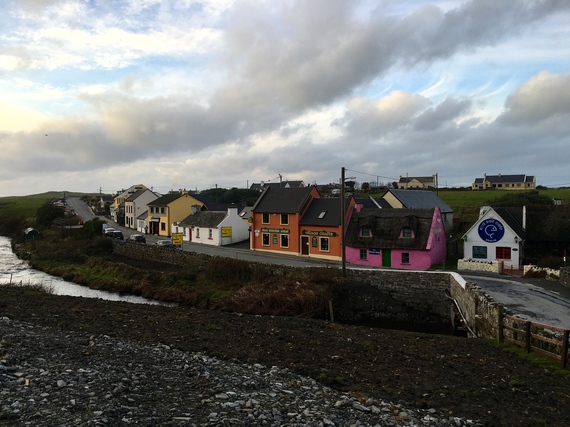 There was no one defining moment, however, that formed such a lasting, memorable impression of Doolin; no grand, sweeping gestures or calls of attention to the benevolent. In fact, the beauty of Irish hospitality was more in its subtlety and humility than it was in any specific act itself.

It was the bartender who introduced himself with a smile, took an interest in who we were, informed us of local happenings - i.e., that there was a "concert" at our hotel later that night - and suggested pubs for us to visit in Edinburgh, the next stop on our trip.

It was the two local men, standing outside the pub as we left, who excitedly shouted out, "See you at the concert!", as we headed back up the winding road to our hotel.

It was the palpable sense of camaraderie among a group of visitors and natives in Hotel Doolin listening to local musicians play some of the best Irish music I've ever heard.

It was the local group of young friends who engaged us in a conversation - playfully challenging us to spell different Irish names - and invited us to meet them at McGann's the following night for a dart tournament.

It was our shuttle driver who asked us about our lives, offered us tips on where to begin our hike, and made us laugh with his quick Irish wit as he sped over the hills to drop us at the bottom of the trail.

And it was the hotel staff who presented us with a freshly baked loaf of bread upon our early morning departure, knowing that we would be traveling all day.

They were small, thoughtful acts that not only confirmed the truth behind what has long been heralded as one of the Irish's most venerated traditions, but also reminded me of man's yearning to feel welcomed and comforted, acknowledged and appreciated, by fellow man, no matter where we may find ourselves on life's journey. 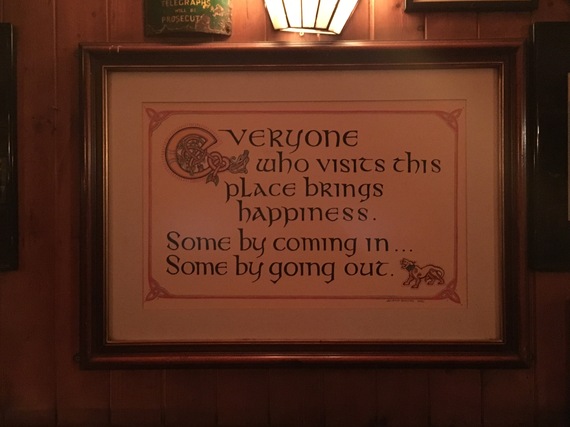 Washington Irving once wrote, "there is an emanation from the heart in genuine hospitality which cannot be described, but is immediately felt and puts the stranger at once at his ease."

Nearly 3,000 miles from home, hailing from the disparate world of New York City, the people of Doolin had every right to consider me a stranger - an "American" or a "GDY" (God Damn Yank), as our Irish bus driver told us jokingly.

But, as much of a stranger as I was to them - and as much as the people of Doolin were "strangers" to me - I have never felt more at ease than I did during those three short days of my visit. Their genuine hospitality, exhibited in the most humble of manners - a warm welcome, a genuine smile, a thoughtful question, a deliberate acknowledgement - was enough to replenish and restore my soul, fulfilling the mission of my two-week long European adventure.

There's a saying in Gaelic, "Céad Míle Fáilte." Its literal translation is "one hundred thousand welcomes", or "you are welcome, a thousand times, wherever you come from, whosoever you be."

If ever there was a place to experience authentic Irish hospitality, to offer whosoever you be a thousand welcomes, Doolin - a village of just 500 people - must be it.