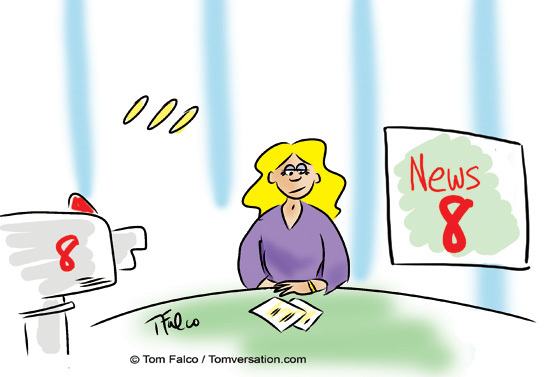 I've tried something new on Facebook; I'm following a bunch of news organizations -- you know, local newspapers and TV stations. It's an interesting perspective of what's going on in the world (I have a couple of British publications on the list, too).

Most promote the same viral news, like the latest cat video or the latest Kardashian escapade, but for the most part, the news is unique to specific areas. Living in Florida, I find the snow-filled weather reports quite interesting and each TV station or newspaper features local people or businesses that are foreign to me, yet quite interesting.

I chose a bunch of locations randomly and since I prefer newspapers to TV news, I mostly chose the newspapers, but still I have many TV stations from places like KRON 4 in Wisconsin and WCVB Channel 5 in Boston, WTNH News 8 in Connecticut, KCCI Channel 8 in central Iowa. There are a lot of channel 8's once you leave the big cities, which are mostly 2s, 4s and 7s.

The Billings, Montana Gazette, Detroit Free Press (it's not as much of a mess there as we think), The Arizona Republic, The Chicago Sun-Times, the San Francisco Chronicle, The Staten Island Advance, The New York Daily News and so many more newspapers feature great human interest stories.

One common denominator, other than the snowy weather, are robberies and shootings. They seem to be similar in each city around the country. That's a national issue, it seems.

How else would I know that scientists in New Jersey have found two new frog species or that a local man in Connecticut was the first man to actually fly or that the Golden Gate Bridge will be closed for renovations for a spell?

And now I know the top 10 restaurants in upstate New York thanks to the Poughkeepsie Journal.

I like the idea of visiting the places I have been or want to go and getting a taste, of each place, especially while watching the TV news reports. The news sets and formats are all the same all over, but the accents, the stories, the whole flavor of each demographic are different and unique to that area.

To show you how much I get involved in the stories and attitudes of the news outlets, I spelled flavor as "flavour" in the paragraph above before I re-spelled it the American way.