Businesses always find big bucks for the boss. He wants a raise; he gets it. No problem. For workers whose sweat of the brow produces profits, well, somehow there’s never a cent for them.

No way could they pay, they protested! The proposed rule would bankrupt America, they raged. It’s not humanly possible, they fumed, for corporations that pad CEO paychecks with millions in bonuses to also manage to pay time and a half when workers labor more than 40 hours a week. Can’t be done, they cried! Well, except that it has been done since 1938. 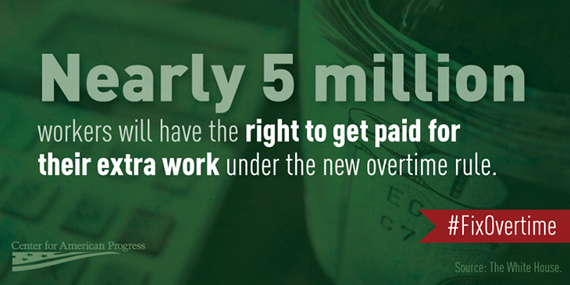 President Obama proposed setting the salary threshold under which employers would have to pay overtime to salaried workers at $50,440 a year. Taking inflation into account, that is the level at which it was set in 1975.

Somehow, corporations managed to pay time and a half for overtime worked by employees in that salary range in 1975. Maybe those CEOs were smarter than today’s crew caterwauling that they can’t do it.

President Obama estimated that 5 million workers would benefit from increasing the threshold. What that really means is that right now, corporations are cheating 5 million workers out of overtime pay they deserve because they labor more than 40 hours. These are salaried workers, so corporations can demand 50, 60, even 70 hours a week out of them for not a cent in additional compensation.

Though inflation rose each year in the 40 since 1975, the threshold was raised only once in that time. That was in 2004, during the Bush administration, so of course it was a paltry increase. The threshold now stands at $23,660, moribund for 11 years. The result is that only 8 percent of full-time salaried workers qualify for overtime. Even under the proposed rule, not even half ­– 40 percent – would qualify.

Still, highly profitable corporations are complaining. The National Retail Federation, the group that opposes all minimum wage increases, said “there’s no magic pot of money,” from which to pay overtime.

There is, however, always a big fat magic pot load of money to pay CEOs.

CEOs have long argued that they are so great and so valuable and so special that they deserve to get in a day what a worker earns in a year. But a 2013 report by the Institute for Policy Studies smacks that down. The researchers found that nearly 40 percent of the highest paid CEOs over the past 20 years were eventually bailed out, booted or busted.

That is, taxpayers came to the rescue of their companies, corporate boards fired the CEOs or investigators charged them.

Even when CEOs mess up, they clean up. For example, when Hewlett-Packard fired Carly Fiorina as CEO, she walked away with a golden parachute worth $40 million and left behind a corporation hobbled by an ill-advised merger and plunging stock value. There were no golden parachutes for the 30,000 workers she laid off.

CEOs contended their corporations are too poor to pay overtime, but on their next quarterly call with shareholders, they’ll brag about record profits.

In 2013, corporate profits were at their highest level in 85 years. But workers whose labor created those bonanzas didn’t benefit. That same year, employee compensation was at its lowest level in 65 years.

And it’s not getting any better. Average hourly earnings continued to remain flat in May. While the unemployment rate has steadily declined and the stock market climbed to new heights, corporations have failed to respond by raising wages for workers.

They’ve also failed to reward productivity. For three decades after World War II, hourly compensation for the vast majority of workers grew at a rate very close to productivity growth. But from 1973 to 2013, pay for the typical worker rose just 9 percent while productivity increased 74 percent.

Overtime explains part of that discrepancy. As an increasing number of salaried employees worked overtime and businesses paid them nothing at all for it, their productivity increased and corporations took all of the benefits from that.

In announcing the proposed overtime rule, President Obama said, “We’ve got to keep making sure hard work is rewarded. Right now too many Americans are working long days for less pay than they deserve . . . Let’s commit to an economy that rewards hard work, generates rising incomes, and allows everyone to share in the prosperity of a growing America . . . That’s how America should do business. In this country, a hard day’s work deserves a fair day’s pay.”

That’s exactly right. Businesses lavish CEOs with fat paychecks and perks whether they do a good job or not. A well-run firm could find money to properly compensate employees who devote extra hours to ensure the place keeps humming.